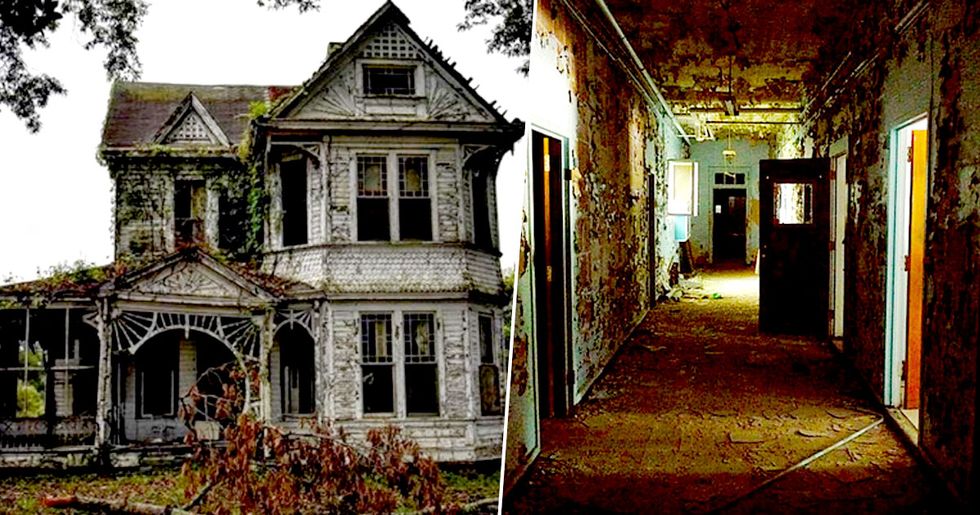 House renovation shows are all the rage for a whole generation of people. I'm pretty sure that 90 per cent of all the television my mum watches is about decrepit old houses that get done up.

However, if ever there was a way to get me interested, it's this. Essentially, these houses are being done up and placed on the market, but the difference is - these houses had people murdered in them. Now you've got my interest.

Keep scrolling to learn more about this dark but interesting TV show.

They're two of the most popular genres on Earth.

House renovation shows fill countless television channels daily schedules day after day after day. And for good reason. Why? Because people adore them. I don't know why exactly but for some reason people love seeing buildings in ruins being made glamorous.

True crime has always appealed to the human imagination. Even long before telly, sensationalized news stories about murders and organized crime would fascinate readers across the globe. Now things have gone up a notch.

True crime is bigger than ever.

With the rise of Netflix, true crime has got even bigger than ever before. Many of the streaming platforms biggest shows are true crime. Shows such as Making a Murderer, The Confession Tapes, The Staircase, and Mind Hunter.

Well according to the experts there are numerous reasons we're obsessed with true crime. One reason is that we are naturally fascinated by evil and true crime gives us an insight into evil actions which we would never commit ourselves. It also gives us a thrilling adrenaline rush.

Another reason we love true crime.

Is because we 'can't look away from a train-wreck'. Scott Bonn, professor of criminology at Drew University and author of Why We Love Serial Killers, wrote at TIME:

Serial killers tantalize people much like traffic accidents, train wrecks, or natural disasters. The public’s fascination with them can be seen as a specific manifestation of its more general fixation on violence and calamity. In other words, the actions of a serial killer may be horrible to behold but much of the public simply cannot look away due to the spectacle.

Being interested with true crime does not make you a psychopath, it makes you perfectly normal. Dr. Michael Mantell, former chief psychologist of the San Diego Police Department, explained:

It says that we're normal and we're healthy. I think our interest in crime serves a number of different healthy psychological purposes.

Now we have the perfect mixture.

Murder House Flip is the perfect hybrid between true crime and housing renovation show creating the perfect combination between the two, and BOY are we excited?!

It's exactly what it says on the tin. They take a house which was once the house where a grisly murder took place and then they do it up in order to resell it.

It's made by the CSI producer.

Murder House Flip is the brainchild of CSI executive producer Josh Berman so it's sure to be a truly fascinating crime show.

It will star numerous experts.

The show will see a mixture of forensic science specialists, spiritualist healers, and renovation experts challenge themselves to make disturbed homes habitable. However, of course, they'll be revealing a lot of dark secrets from the past along the way.

The show's made by Sony.

The show is being produced for Sony Pictures Television and Penny Dreadful's Chris King and author Katherine Ramsland have also signed up to produce.

We are thrilled to bring this one of a kind series to life and dive into a world that combines America's two biggest TV obsessions: true crime and home renovation.

It sounds so good.

"Murder House Flip” is a home-makeover show that aims to transform homes where murders have happened — in roughly 1… https://t.co/rminIJ3fFS
— James Oliphant (@James Oliphant)1577990312.0

Murder House Flip combines home renovations with the intriguing elements of a true crime series. Bringing healing and solace to families living in the aftermath of tragic events by transforming dark places into healthy spaces.

Each episode will be short.

Every episode of the show will be between just seven and ten minutes long, meaning they'll be cramming a lot in to such a short space of time. However, I for one believe that could make these shows highly addictive.

But now for the bad news.

If you want to check out the show, unfortunately you'll have to sign up to yet another streaming service. Murder House Flip will air on a brand new, mobile only streaming app called Quibi.

The streaming app drops in April and it'll sure be interesting to see how a mobile only app competes with the likes of Netflix and Amazon Prime. Interestingly, it's only going to be running short-form video too.

But the biggest question is.

Would you want to live in a house where somebody had been brutally murdered? I sure as hell wouldn't.

We can't wait for this.

I don't know about you but I cannot wait to check this out!