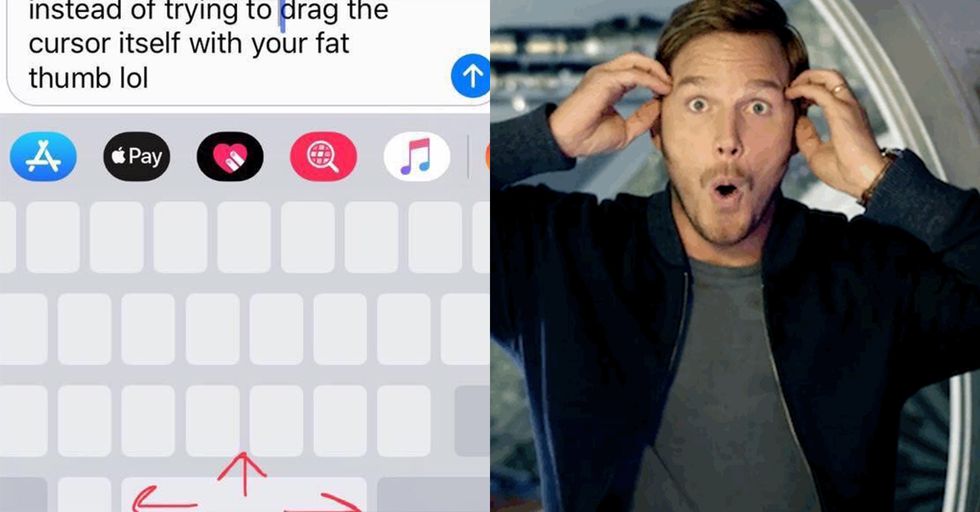 A new iPhone time-saver is shaking the internet to its core!

Krissy Brierre-Davis pointed out a useful iPhone feature the other day...and people went wild. Have you, like so many others, felt frustration while typing on your iPhone? For sure, manually moving the cursor around with your thumb is super annoying. And, it can take way too long to get that cursor right where you want it. But no more!

As part of the iPhone's 3D Touch feature, there's a shortcut for this. On Twitter, the discovery is rightfully being hailed as a life-changing event.

Find out about this feature, plus other cool iPhone shortcuts. Technology is always changing, make sure you're using it like a pro!

Specifically, the ‘typing’ part of an iPhone that becomes downright obnoxious to manage when you’ve got to backtrack and correct a word or a sentence.

One iPhone user had a veritable ‘a-ha’ moment!

Twitter user @krissys_kitchen discovered a little-known perk of the touchscreen spacebar, allowing you to move the cursor without manually (and clumsily) dragging your finger across the screen.

And people were shook.

Same, though. Can you even imagine how much time we’re gonna save this way?

This guy said it best:

Just look at that cursor go!

A lot of people were in the same boat.

This isn’t exactly a new feature, but today was the day that many people were made aware of it!

And they were quick to thank Krissy for her service.

Hey, time is valuable—and she saved a whole bunch of ours! Pretty sure that makes her a hero.

It works with more than just the spacebar.

Here’s how you make it work anywhere on the keyboard:

Regardless of keyboard type, you’ve got options!

It’s been a thing for several years.

But it isn’t prominently featured in the handbook, so it’s not our fault we didn’t know! (Oops.)

And all post-6S iPhones have it!

So, if that applies to you, then give this cool feature a try!

These people certainly did.

Why not play around with it, right?

And the feature is getting a solid thumbs-up.

There’s just something oddly satisfying about watching the cursor slide around that screen without your finger in the way.

All in all, this was an A+ discovery.

We all get convenient typing features!

And the magic continues:

What can’t we do with 3D Touch?

Apparently, some people were already aware of this.

Some people couldn’t help but mourn.

It’s not always easy to let go of what could have been.

But it’s better late than never!

In fact, there are a whole bunch of time-saving features you may or may not be aware of. So, in case you only skimmed the user’s manual, here are some more cool tricks!

You can press the green call button to quickly redial the last number you called on your phone.

Delete calculator numbers with a swipe.

When you’re in the calculator app and press a wrong number, just swipe left or right on the screen where the numbers appear to get rid of them.

Or, forego the calculator app entirely.

You can pull down to open up Spotlight and do a quick math problem right there.

Hold down the camera’s shutter button to enter burst mode.

Quickly reply to a message without leaving your current app.

When you get a notification at the top of your screen for an incoming message, just pull it down. You can tap out a reply while staying in whatever app you have open!

Find a lost phone? No problem.

Just ask, “Siri, whose phone is this?" and it’ll show you so that you can contact them.

Get a website’s desktop version.

If you need to open up the desktop version of a website, rather than its mobile, just press and hold the ‘refresh’ button in the URL bar.

All drawing tools and erasers in the Notes app are pressure-sensitive!

If you 3D Touch tabs in your Safari app, it’ll let you peek at the page before you open it.

Now you know your iPhone inside and out.

Make the most of your time! You deserve it. Share this news with all of your iPhone-owning friends and family!