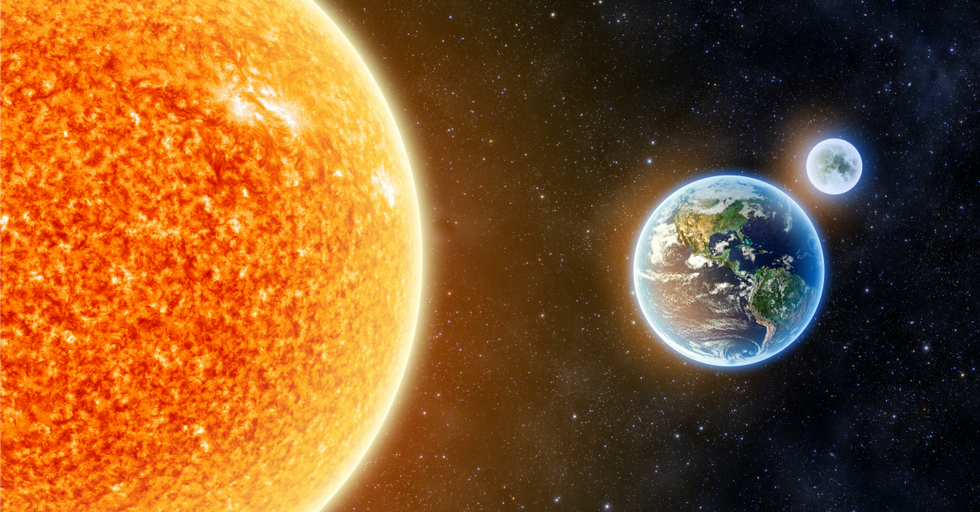 Sometimes I think that Americans get a bad rap for being “dumb” and  uneducated. But I’ve gotta say...this new study certainly isn’t doing us any favors.

A new survey found that 1 in 4 Americans thought that the sun travels around the earth, and not vice-versa.

Yes, you read that correctly: ONE...IN...FOUR Americans — aka a quarter of our entire nation, aka the people you see at grocery stores, carpool with, and probably enjoy Thanksgiving dinner with — believe that the big ol' flaming ball of gas that we all know, love, and secretly fear makes a daily trip around our planet, just to say hi.

Apparently the study was conducted by the National Science Foundation in 2012.

The findings, however, were not released until 2017 because those conducting the study kept fainting from shock every time they read the results.

The study asked 2,200 Americans a variety of true/false questions ranging from "The Universe began with a huge explosion" to "Human beings, as we know them today, developed from earlier species of animals."

Not shockingly, many of those surveyed didn't get those questions right, either.

The stat "one in four Americans" really might not seem that crazy to some of you. But to put it in perspective, look around you right now.

Do you see three people? You probably do. That means that, including you, one of those people actually thinks that THE SUN TRAVELS AROUND THE FREAKIN' EARTH!!!

*catches breath* Now, granted, some questions of science and scientific theories ARE legitimately up for debate, one thing that I (would like to) think we can ALL agree on, in no uncertain terms, is that the Earth does indeed, travel around the sun.

Although I'm sure someone will disagree with me on that, too. I guess that is what the Internet is for.

We're all still having fun, right?

Throughout time, people have had all KINDS of thoughts on the world and what it looks like and its function. Heck, probably the biggest question that any of us face in our given day is "Why are we here?"

And while I, nor any of you, can definitely answer that question, one thing that a vast majority of us should be able to succinctly deduce is this: The earth, most definitely, without question, travels around the sun.

Now "Flat Earth" on the other hand...

....that right there is a topic for another day.