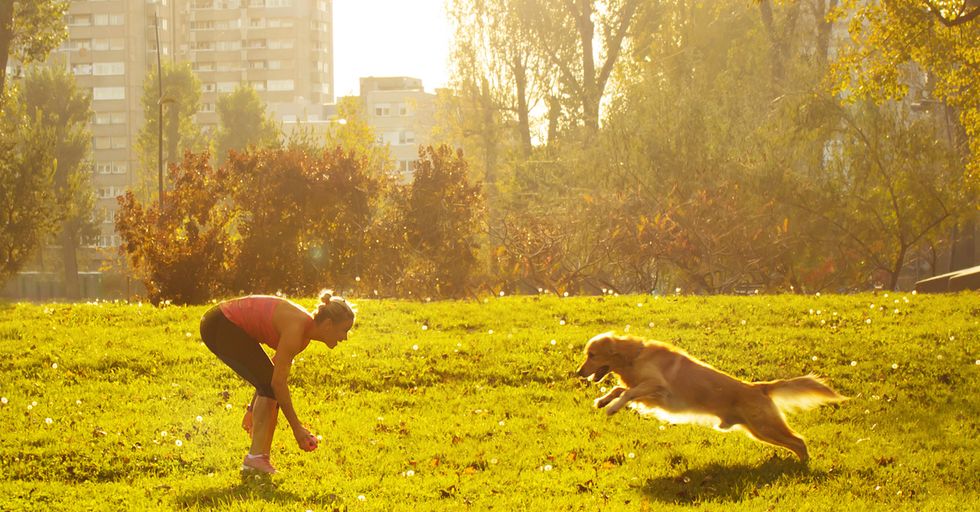 Dog kisses have always been a little mysterious. Is it love? Do they want a treat? Or do they just like the salty taste of our skin? It's love. Right? That's what dog owners have told themselves forever, and now science can back up that claim.

It feels like true love. If you've ever had a dog, you know. It's love. Right?

Or is the dog just in it for our opposable thumbs, which are great for giving out treats?

They do really love treats. And come to think of it, I'm not sure if my dog looks at me quite as adoringly as she looks at bacon.

An Emory University neuroscientist was out to find out once and for all: is it love?

Dr. Gregory Berns' new book, "What It’s Like to Be a Dog," details his research in which he used MRI scans to study the brains of dogs. After months of acclimating the dogs to the sounds of the MRI, he scanned them while alternately giving them hot dogs and praise. The same parts of their brains lit up for both. Berns explains, "When we compared their responses and looked at the rewards center of their brains, the vast number of dogs responded to praise and food equally ... About 20 percent had stronger responses to praise than to food. From that, we conclude that the vast majority of dogs love us at least as much as food."

Did you hear that? They love us at least as much!

We knew it was real.

Because MRIs can be noisy and frightening, it took Berns awhile to realize it might be possible to scan dogs this way.

He came up with the idea after seeing a dog jump out of a helicopter with a Navy SEALs team. Berns explains, "Helicopters are incredibly noisy. Dogs have extremely sensitive hearing. I thought, 'Gee, if the military can train dogs to get into noisy helicopters, it might be possible to get them into noisy MRIs.'"

His goal was to find out if they really love us, or if they're just in it for what we can provide.

After losing his beloved dog, Berns wondered if the love between the two of them had been real. This might sound strange if you're not a dog person, but if you are, you totally get it.

The study has broad implications, beyond our egos.

I mean, it's great to know it's the real deal with your dog. But this study could prove much more valuable than that. By understanding how different dogs respond to treats and praise, it's possible that a scan of several puppies could show which ones are the best candidates to train as service, police, or military dogs.

We rely on dogs for so much.

Anyone who has experience with a service dog has never doubted if the love was real. These incredible dogs put service before self daily. Knowing which puppies would be easier, and therefore cheaper and faster, to train could help get more dogs into service roles.

Some dogs were made to work.

Watch any good working dog and there's no question: that's what they were born to do.

Some dogs were made to cuddle.

It makes those doggy snuggles that much sweeter now that we know the love behind them is genuine.

And some dogs were made for ... other stuff.

Not every dog was made to leap from a helicopter. I'm happy that brave military dogs exist, but my heart is just as likely to fall for the dumbest dog on the block. Because love is love.