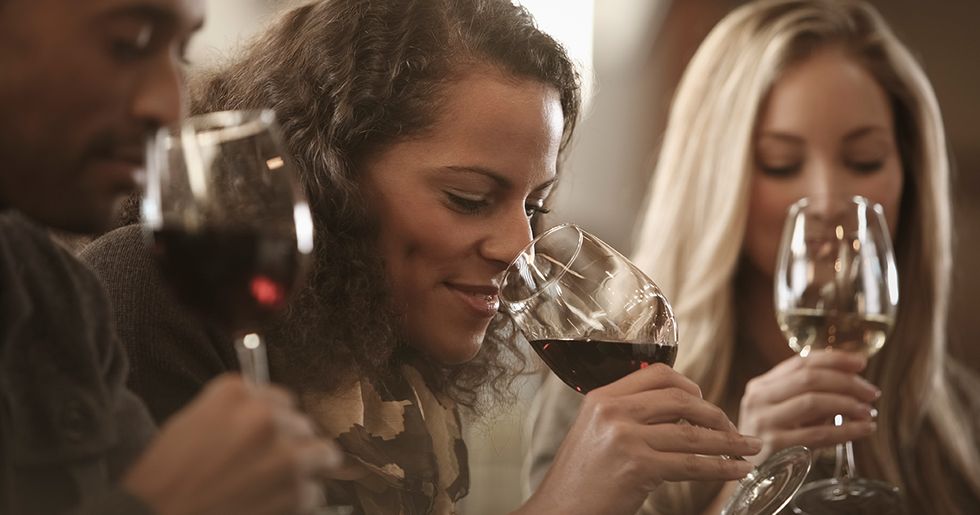 Sometimes it's astounding how easy people are to manipulate. Other times, it's so predictable you just have to laugh. Let's test it out: if I gave you two bottles of wine, one with an expensive label and one with a cheap label, which one would taste better?

Your brain is SO convinced that you get what you pay for, it makes you taste the wine as more appealing. Human brains are wild. We've even got the science to prove it. A new study took a look at how we respond to wine at different price points and the results are surprising.

Wine is an important part of any life well-lived.

Or at least that's what I tell myself each night before consuming some $3 alcoholic grape juice.

But most of us wouldn't consider ourselves wine connoisseurs.

That stuff can add up fast.

Most of us has taste that runs more towards the "juice box" style of wine.

But we all know that wine could be significantly more amazing if we had tons of money to spend on it.

But just how much better IS expensive wine?

One experiment set out to find the real answer.

Researchers at INSEAD and the University of Bonn took on the question.

30 people tasted wine while lying in an MRI scanner.

And what they found wasn't exactly what they expected.

Our brains actually process wine differently when we think it's expensive.

Bernd Webber of the University of Bonn said: “Studies have shown that people enjoy identical products such as wine or chocolate more if they have a higher price tag."

What we didn't know was WHY.

So including the MRI component to the study gave us some new information.

So what did the scans show?

That's where it got wild.

Not only did participants rate the "more expensive" wines better...

It's going to get technical for a hot second.

Buckle in because we're about to drop some neuropsychology on you.

The areas that the researchers noticed are called the striatum, the posterior insula, and the dorsal medial prefrontal cortex.

These areas are associated with differences in personality traits and researchers found that they actual moderated the taste of the wine based on the person's expectations.

Wait, what does that mean?

It means your brain will make things taste different based on how you expect them to taste.

The anterior prefrontal cortex takes new information and makes it into long term memories. Researchers thought that it might be connecting price to expectations.

The area is also known to be responsible for placebo responses to meds.

Memory is important to expectations.

“Participants might recruit this brain region when reflecting on the external information from the price cue and their subjective beliefs and memories about how expensive and less expensive wines should taste," the authors wrote.

The other part of the brain that's involved is the ventral striatum.

That's the bit that ties rewards and motivation in. Your memories tell you the wine will taste better, then you feel rewarded when you drink it. Bada bing, bada boom.

Brains are so weird.

But also kind of amazing?

There were some bonus findings too.

People who are reward-seekers or who have low physical self-awareness were more likely to be swayed by the marketing.

You can also lower the effect.

If you'd rather your expectations don't affect your perception, focus on your internal experiences and less on what's around you. That lowered the response to marketing.

So what does that mean for the average Joe?

It means you can trick yourself into making wine taste better.

Just have a friend bring you some wine...

And tell you it's super expensive. Boom. Your brain will like it more.

Ok maybe that's not what the researchers meant.

Instead, they seem focused on the marketing implications: "Marketing actions can change the very biological processes underlying a purchasing decision, making the effect very powerful indeed."

So maybe the point is that we're living in a dystopia where marketers control our thoughts?

Naw that's probably not right either.

Whatever the point I think I need a glass of wine.

And someone better tell me it's expensive.

Because the true moral of the story is that wine is wonderful.

And we should all drink some.

And it doesn't really matter if it's cheap or expensive.

What's important is how you feel about your wine.

You get back what you put into the universe...in your wine.

I'll drink to that.