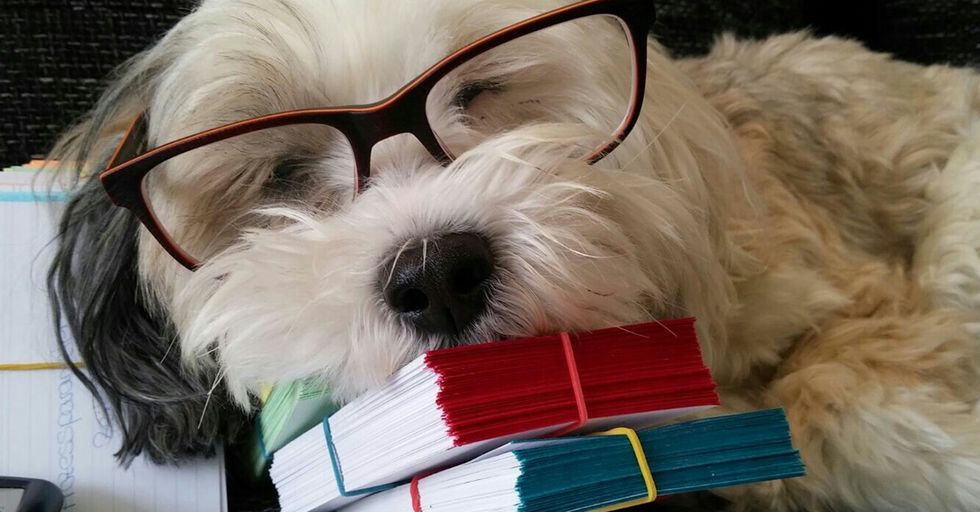 We know, your dog is a good boy. Or maybe the "good-est boy" as some people refer to them on Twitter. Their ability to do tricks and impress your friends and family seems to be the standard for what makes dogs so dang smart.

Fetch, play dead, roll over. These are some pretty great tricks to show off, but what makes this different from any other animal? How do dogs stack up in when compared to the intelligence of other creatures?

How mad would you be if we told you, actually if science told you, that dogs are not the smartest breed like we tend to think they are? Dog lovers, don't freak out; it's not as bad as it sounds. We're just saying, maybe they aren't the geniuses we think they are.

I know not everyone loves dogs, but it's hard not to smile at these furry little friends even if you don't own one, or if you consider yourself a cat person.

Some people are not only obsessed with their dogs but can also get a little carried away with how amazing they are. Or, worse, they become offended if you say anything about their pooch not being the most perfect creation ever.

How come it's never "top cat" or "top bird?" It is obvious that there is some history behind everyone thinking dogs are the smartest creatures out there.

Not a good boy?

Recently, an article in The New York Times stated that dogs might not be the top dog. But, it is also clear in saying that dogs aren't dumb, they just aren't as exceptional as we think.

There have been thousands of studies on dogs dating back hundreds of years. Some research even states that dogs have been man's BFF for over 33,000 years.

The world of science is utterly fascinated with strays, and it shows with the insane amount of research and studies focusing on dogs and dogs alone.

But why do we study dogs so much?

One geneticist from the University of Massachusetts, Dr. Elinor Karlsson, had a few thoughts. Although she owns three cats of her own, most of her research is with dogs. "I think [cats] they're taken less seriously than dogs, probably to do with societal biases," said Dr. Karlsson.

There are almost twice as many studies done on dogs as there are on cats. A quick Google Scholar search will show results of 1,670,000 articles about cats and 2,850,000 for dogs.

There is a deeply rooted belief that hounds are overall smarter creatures, and are worthy of being studied more due to their intelligence. Cats, apparently, have a pretty bad reputation in the science world, overall making them less appealing to study.

Give it to me straight

This could cause some serious tension, but science is here to tell you that beloved canines are not the smartest animal out there.

A good, but not great, boy

Sure, they are smart and trainable, but their intelligence is not that above other animals. They are actually quite average in comparison.

Stephen Lea, a professor at the University of Exeter in Britain, studies psychology and was the editor of the journal, Animal Cognition. He found some pretty interesting stuff in his animal studies that made him rethink his attitude towards the intelligence of dogs.

“Almost everything a dog claimed to do, other animals could do too," Dr. Lea said in his interview with The New York Times. “It made me quite wary that dogs were special."

Tools are not for fools

Dr. Lea said there are things dogs are not capable of doing that other species are, like using tools. Dogs are not able to utilize them, but dolphins, New Caledonian crows and chimpanzees can.

Ever seen a chimp go fishing?

These animals are crazy smart. Here's footage of a chimp fishing for food using their own fishing pole as a tool. Is this not the most amazing thing you've ever seen? A dog would never be able to perform such a task.

I know this might be a lot to take in. It feels like your dog-obsessed world might be crashing down, but it is all true. Even if it is a hard, furry pill to swallow.

The genius title that dogs have inherited is finally being shown for what it really is: a long believed but well-established lie.

But what about THIS?

It's hard to believe when you see dogs, like Skidboot here, do such incredible tricks. He was able to perform these on national television, leaving even Oprah speechless at his talent. He even had the nickname the "canine Einstein," which is very fitting.

But scientists are saying that these amazing tricks aren't exclusive to just dogs; in fact, many other animals are capable of these tricks.

Even Simon Cowell is shocked that these cats are capable of such amazing talent. When cats do these tricks, it seems more impressive. Plus, it's not very common to see cats presented as performers.

Put it to the test

Dr. Lea needed to know: did dog-lovers (and scientists) give these furry creatures a reputation that seemed to outshine other pets? He wanted to test his hypothesis.

Referring to carrier pigeons that are trained to find their way home after crossing extreme distances, Dr. Lea said: “Far be it for me to suggest that pigeons are smarter than dogs; they are not intellectual giants, but if you want to get 1,000 miles, I trust a pigeon over a dog."

Pigeons are smart, too!

I don't think anyone would say that a pigeon is necessarily smarter than a dog, but it's all about the context of intelligence.

I'm not horsin' around

Even a horses' intelligence surprise people, but they can be trained to do some pretty amazing things.

It's not a competition

These studies are not trying to find and declare the smartest species, but it seems like their results are breaking some animal stereotypes.

Mieshelle Nagelschneider, who has been called The Cat Whisperer, knows a great deal about cats after studying them for years and has written books on cat behavior.

“I have found throughout the years that my clients who are rocket scientists and neurosurgeons always have the most cats," said Nagelschneider. Maybe intelligence attracts more intelligence?

Dog owners, you have hope

Both you and your dog are not unintelligent; let's just make that clear. Dogs are very smart creatures, just as humans are.

“It is much easier to show intelligence in dogs because they like to be trained," Dr. Lea said. They are good boys, no matter what science says, and for the most part, are very good at being trained.

Dogs are, as Dr. Lea said, "not smarter than they are supposed to be, given what they are." Not exceptionally smart, but definitely not dumb. OK, I can handle that.

There is a silver lining. Science and pet owners can agree on this one thing: what separates dogs from other animals is their capacity for affection. Clive Wynne, the director of the Canine Science Collaboratory at Arizona State University, says this is what makes dogs stand out.

It's a ruff life

Maybe dogs aren't as smart as we have been giving them credit for, but we know that their intelligence isn't the only reason we love them so much. They are so much more than just a four-legged fur ball that can roll over.

Go give your favorite dog a hug, and share this with your fellow dog lovers (maybe even a few cat lovers, too).