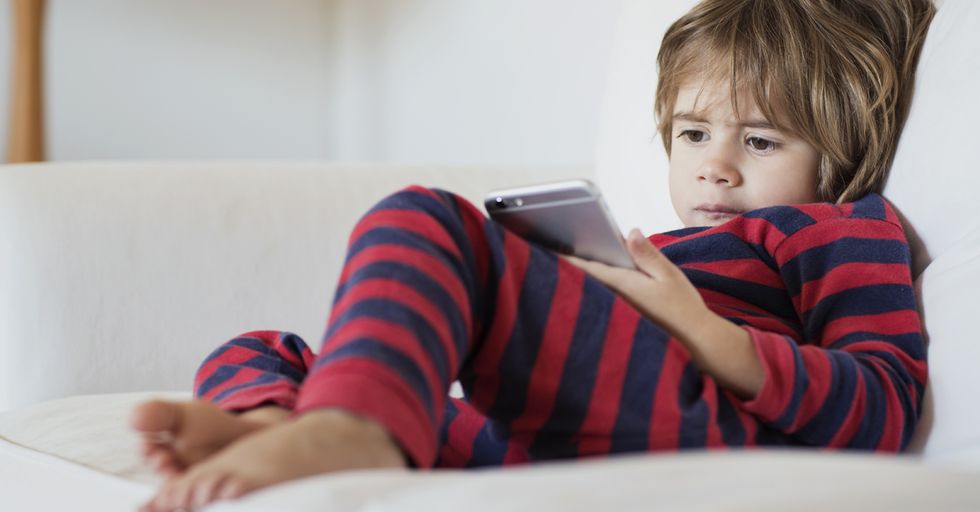 Most of us parents know that it is important to set a "screen time limit" so that our kids aren't glued to a device all day.

We know this because our pediatricians remind us at every well-visit that our kids should not get more than 2-hours of screens per day. *Gulp.* I will admit that my kids watch more than the recommended 2-hours per day. On average, they probably get 3-hours or so per day.

Common sense also tells us that our kids need physical activity so that they don't become couch potatoes. And when they are on their devices for too long, they aren't getting any activity. And when we were kids, tablets and iPads were non-existent; however, we did have Super Mario Bros.

There is a reason pediatricians remind us of the importance of limiting screen time and a recent study done by Canadian researchers shows evidence of developmental delays in kids with too much screen access.

We live in a world where it is the norm to have a smartphone or device in hand at almost all times.

Nearly every person you pass on the street is connected to a Wi-Fi.

This doesn't change once you become a parent.

In fact, you will be googling everything under the sun when it comes to getting answers on parenting woes. And then you see how intrigued your child is by this device you use so frequently.

And most of us parents can admit to the ease a device brings.

It's so easy to hand your kid a phone or tablet to quiet them while you can clean the house or wait for your food to come to the table at a restaurant.

Besides that, having a toddler means you don't get nearly as much done as you would like to.

Like going to the grocery store, for example. I see toddlers with a device in hand MANY times when I am at the grocery store. I prefer to just leave my kids at home with dad because that's just too much of a headache to deal with.

There is evidence that shows screen time can affect the growing mind of a toddler.

This recent study published in the Journal of the American Medical Association (JAMA) looked at 2,400 typically developing children in Canada.

And found screen time starts at a young age.

At the age of two, the children were clocking up around 17 hours of screen time per week.

And by the age of three, that number increased.

Researchers found that "greater amounts of screen time from ages 2 to 3 were associated with significantly poorer performance when their development was assessed at ages 3 and 5."

This is the first study of this kind.

While there have been other studies done in the past, this one is the first to expose the long-term effects too much screen time has on a child.

This study followed these children over time.

The moms were surveyed (between 2011 and 2016) about screen usage. They completed questionnaires about their child's skills and development at ages 2, 3 & 5.

"The findings, published in the JAMA Paediatrics, suggest increased viewing begins before any delay in development can be seen, rather than children with poor developmental performance than going on to have more screen time."

What the study showed.

However, other factors have to be considered.

Including on whether or not the child is exposed to other educational stimuli; also their upbringing. Some parents simply interact with their children more than others.

The researchers believe the screens can cause delays.

Such as in social interactions with their siblings or other kids their age. They could also be using that time spent on a device to discover the outdoors — or simply just do more creative play.

Parents have to set a limit.

The American Academy of Pediatrics recommends screen times should be limited to 1-hour per day for children ages 1 to 2. And the programs they are watching should be of high-quality content.

This recommendation isn't always feasible, as any busy mom will tell you.

But, there are other ways to keep young children occupied. And if mom is on her phone too much, your child will pick up on this and mimic you.

Enforce media-free rules in the household.

"The AAP advises families to designate media-free times together, such as dinner or driving, as well as media-free locations at home, such as bedrooms."

This is especially important if it's affecting your child's sleep.

Most experts suggest that children should not be exposed to screens one-hour before bed so that their brains have time to wind down for good sleep.

And this recommendation shouldn't just be for kids!

Adults should also practice reducing screen time before bed. And if you simply cannot control yourself, then make sure you have your blue light filter on.

Other parts of the world disagree with setting a time limit.

"The UK's Royal College of Paediatrics and Child Health (RCPCH) put out guidelines earlier this year, but sets no limit."

Their logic makes sense as well.

And when you are satisfied with the responses to these questions.

Then you are all good. *Thumbs up!* As a mom, I like this way of thinking. I mean, does anyone really set a timer when their kid is on a device? If you answered yes, I applaud you, good woman!

So, how do you find a healthy balance?

Every home is different. But, I think we can all agree that sitting too long is not very healthy. And when kids are on a screen — they are sitting down.

This time of year can be especially hard.

We are in the smack middle of a very cold winter. And depending on where you live, you do have to get creative in keeping your little one(s) busy.

When it is too cold to play outside, think of fun indoor activities they can do.

This week I have been pretty much housebound with my kids. I created some "homework" for my 3-year-old to do so that she would be forced to work her brain and be like her big sister.

I do not have an education degree.

But who needs one to write out the alphabet on a piece of paper and have your toddler trace it? She loved it!

I also wrote out her name to trace.

Her name is a bit lengthy and I've noticed she needs work on writing it out. This is the best time for her to practice those skills while we are stuck in the house due to the blistering cold.

Family games are also a plus!

Depending on the ages of your kids, this can be tricky. We tried Twister, but the little one doesn't quite grasp the idea. So instead, I had them do a coin toss into a small basket. They thought it was the greatest thing ever!

If none of that sounds like your cup of tea, then go online for ideas!

Hello, Pinterest! Or just Google, "things for kids to do indoors" and you're sure to find a plethora of ideas.

And if all else fails...

Just put on a damn movie and call it a day. Winter sucks and kids get cabin fever. Don't beat yourself up if your child has had too much screen time in one day or even in a week. We all have times when we are reliant on technology. That doesn't make you a bad parent — it makes you a real one!