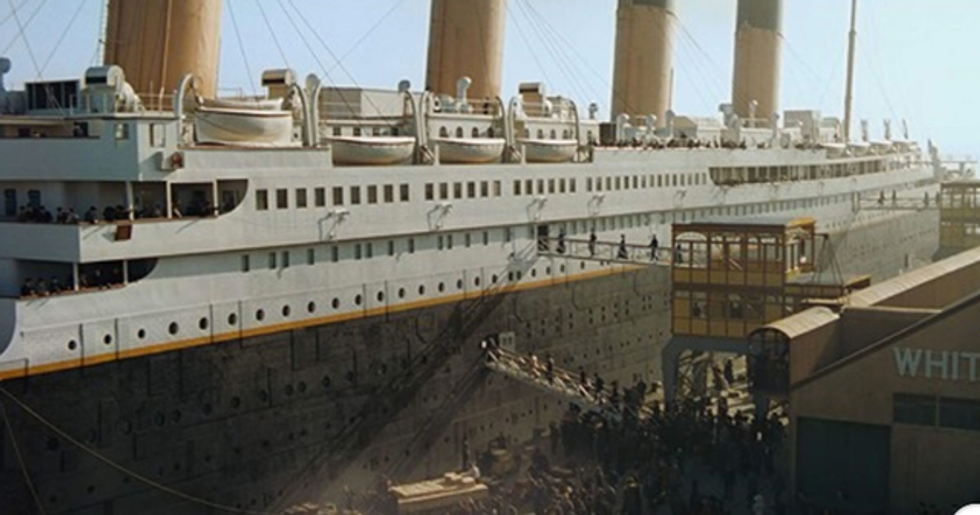 The sinking of the Titanic is perhaps the most famous, yet devastating, maritime disaster in modern history.

Setting sail on its maiden voyage in 1912 from Southampton, U.K., to New York, the Titanic was one of the biggest and fastest passenger ships of its time, with it carrying over 2,000 passengers and crew members.

However, while crossing the Atlantic ocean in the early hours of April 15th, the Titanic hit an iceberg, which subsequently caused the ship to sink, killing over 1,500 onboard passengers.

The Titanic's name has been tainted ever since, so, of course, no one has ever attempted to "remake" the doomed cruise liner... Until now.

One optimistic businessman has announced that construction for the "Titanic II" is currently underway, and is scheduled to depart on its maiden voyage as soon as 2022. And he plans to make the new ship an exact replica of the original... Am I the only one who has a bad feeling about this?

The RMS Titanic is perhaps the most famous ship of all time.

But for all the wrong reasons. At the time of its departure, the Titanic was the grandest, most luxurious cruise ship to have ever sailed the ocean and was one of three Olympic-class ocean liners built by White Star Line in Belfast.

The Titanic was ground-breaking.

The ship was the biggest of its time, measuring in at 269 metres in length, making it the largest man-made moving object on Earth. It also travelled at twenty-six miles per hour, which was faster than any other vessel at the time.

Though it didn't quite live up to its name.

The ship’s name itself, Titanic, holds a dark irony, as it was supposed to convey its impressive size, power, and reputation as unsinkable.

There was much excitement on the day of the Titanic's departure.

On April 10th, 1912, the Titanic set sail from Southampton on her week-long transatlantic voyage to New York. Crowds of excitable onlookers waved her off, not knowing that she would never return.

And, only 5 days into the journey, disaster struck.

6 different iceberg warnings had been received throughout the day on Sunday, April 14th, but the cold and calm water conditions made it difficult to spot the fateful iceberg.

The iceberg struck later in the evening...

At around 11.40pm on Sunday, the ship’s lookout spotted an iceberg in its path and sounded the alarm – but it was too late.

It tore through the right side of the ship.

Traveling at full speed, the Titanic had little time to steer clear of the iceberg, which subsequently tore into the ship’s right-side hull. Gaping wounds opened by the iceberg damaged six of the vessel’s watertight compartments and flooded five of them within the hour.

The ship stood no chance.

The Titanic’s chief architect, Thomas Andrews, made it clear to captain Captain Edward John Smith that the ship was going to sink. And at 2:20 am on April 15th, the ship broke in two and sunk to the bottom of the Atlantic, mere hours after initially colliding with the iceberg.

1,500 of the passengers and crew perished with the ship.

And only 306 bodies were ever recovered. Only sixteen wooden lifeboats and four collapsible boats were carried, enough to accommodate 1,178 people. That's only one-third of Titanic's total capacity, but more than legally required.

Most of the passengers froze to death.

The below-freezing midnight waters of the Atlantic caused most of the passengers who reached the water in life jackets to freeze to death within minutes.

Though some argue that the Titanic was destined for disaster.

The very first lifeboat to leave the sinking ship only carried twenty-eight out of sixty-five possible passengers. This mistake was repeated with the other lifeboats. The rescue effort is often criticized for its unfair treatment of passengers from the ship’s three classes, with Third Class passengers suffering the most.

The remains of the ship weren't recovered until 1985.

The wreckage of the ocean liner lies some 12,600 feet underwater in the North Atlantic Ocean and was first discovered in 1985 by explorer, Robert Ballard, and oceanographer, Jean-Louis Michel. A handful of companies are actually planning to take tourists down to the site in 2019 and 2020, but it's unclear how long that window of opportunity will be open.

So why would anyone want to replicate this ship?

Though the vessel was the most glamorous in its time, and the name is, of course, incredibly famous, the horrific event and thousands of lives lost kind of taint all of that, don't you think?

The grizzly history hasn't fazed one businessman, however...

Meet Clive Palmer. This Australian politician-turned-billionaire is the founder behind the extremely ambitious project, Titanic II.

When he's not building cruiseliners, Palmer is the leader of the United Australia Party, which has a similar moto that to our own president... Make Australia Great. Palmer is one hell of a controversial man and has stirred up a lot of controversy with his outlandish policies and extravagant campaigns. Some critics also see the Titanic II as his classless attempt to cash in on a tragedy.

And he wants to recreate the most famous vessel.

His $500 million dollar plans were initially announced in 2012, but have faced years of delays and, due to money-related problems, the work was suspended for 5 years. But, now, it has been confirmed that the construction of the highly-anticipated ship will officially begin this year.

Palmer announced his project on the 100th year anniversary of the disaster.

Clive Palmer first announced his intention to construct the Titanic II in 2012. That year marked the 100th anniversary of the RMS Titanic's 1912 maiden voyage. Palmer's plan was inspired by the milestone date, though the debate is still open as to whether or not his project truly honors the tragedy.

Blue Star Line will own and operate the ship.

Palmer's own company, Blue Star Line, describes this project as the "return of a legend," and promise that the remake will be "every bit as luxurious" as the original ship.

If everything goes to plan, the ship is set to make her maiden voyage as soon as 3 years from now. Though the history of the project thus far leaves plenty of room for skepticism...

The vessel will sail through the exact spot where the original sank.

Palmer announced that the first trip will set out from Dubai in the United Arab Emirates, rather than the original location of Southampton, U.K. The final destination will still be New York City, so the sequel ship will indeed pass through the area where the original intersected with an iceberg. “We’re still going to cruise from Dubai," says Clive Palmer. “After a shakedown cruise from the shipyard to Singapore, we’ll offer a two-week maiden voyage to Dubai, with another grand voyage from Dubai to Southampton."

Everything about the ship will be replicated.

Though the second coming of the vessel will be considerably larger, with 9 decks and 840 staterooms that can accommodate 2,400 passengers and 900 crew members. And, of course, the famous grand staircase is going to be featured in the recreation.

It will be every bit as luxurious as the original.

Palmer has promised that guests will embark upon the most authentic experience. “Blue Star Line will create an authentic Titanic experience, providing passengers with a ship that has the same interiors and cabin layout as the original vessel."

And social classes will still be separated.

As we all know, the original Titanic was sectioned by class, and social status significantly affected passengers' accommodations on the ship. The Titanic II will also be split into first, second, and third-class accommodations, and the berths are intended to be authentic. This means cramped quarters - but discounted prices - for those in the third-class and extreme elegance for those in first.

Though the question of safety still stands...

Considering that the original Titanic was famously understocked with lifeboats, which ultimately resulted in the loss of 1,500 lives, it didn't take long for people to raise their concerns about this particular issue for the remake.

But Palmer is adamant that his vessel will be the safest of them all.

He explained that the ship will "integrate modern safety procedures, navigation methods and 21st-century technology to produce the highest level of luxurious comfort." He has assured people that the ship will be decked out with an array of modern safety features, such as a welded, rather than riveted, hull, modern lifeboats, and digital navigation, satellite, and radar systems. I'll believe it when I see it... Feel like hearing a little more about the original voyage? We've debunked 8 myths about the original ship and its journey - just keep reading to find out what they are!
40%