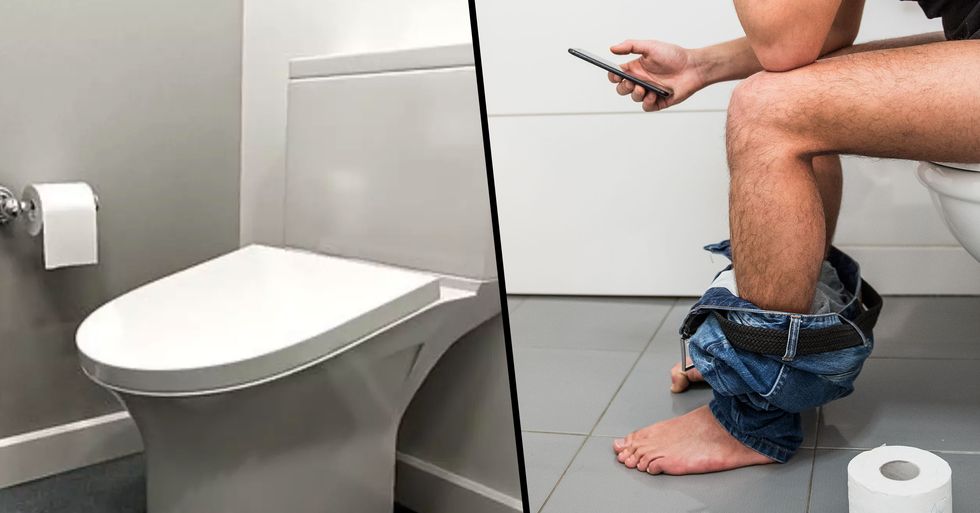 We all have those days at work where we just want to quit and go home. But rather than making such an irrational decision that we'd probably regret later, we opt to take a quick time-out, also known as an "extended toilet-break."

No, they're not technically approved by our bosses, but everyone needs a little "me-time", right?

Well, you might have to say goodbye to that little luxury because a company in the United Kingdom has developed a toilet that will change the way you tinkle... forever.

Keep scrolling to read about the shocking reasons for this new creation...

We're all guilty of slacking off work...

Hear me out. If you call it "slacking off," it sounds like you're doing something bad, but if you call it an "extended toilet break", it doesn't, so that's what we're going with.

We've all done it, so don't kid yourself.

Maybe a co-worker is rubbing you up the wrong way, or you've just had an unpleasant interaction with a know-it-all-customer. Either way, you need to get out of that place to take a breath or two.

Those days might soon be coming to an end...

A new start-up company in the United Kingdom has come up with a new creation that might put an end to extended toilet breaks forever.

Let me introduce to you, the StandardToilet.

Have a look at this bad boy!

And you wouldn't believe how much it hurts to sit on this nasty piece of work...

It has been purposefully designed in a way to stop employees from spending too much time sitting on the toilet and is currently available in 4 designs.

Firstly, it is sloped.

So, instead of being level with the wall, the actual seat is angled at around thirteen degrees so which the developers have said mimics squat thrusts... and you know how painful those are.

It's meant to put a strain on the users' legs and will force them to get up after 5 minutes, if not less.

It has also had the backing of the British Toilet Association (BTA).

And according to rumors, local councils, and highway service stations have already shown an interest in the bathroom appliance.

Why is this necessary?

Mahabir Gill from StandardToilet revealed this: "It is estimated that in the United Kingdom alone, extended employee breaks costs industry and commerce 4 billion per annum."

He also said this:

"With the advent of flexible zero-hour contracts, it is easy to see why our StandardToilet can be an asset to a business."

And though it seems like a torture contraption, it has it's health benefits.

Apparently, the StandardToilet also aims to help with posture as well as other wider health benefits.

Gill told us more about them:

"Medical studies have suggested that using the traditional WC can cause swollen hemorrhoids and weakening of pelvic muscles."

But this might be the answer to our prayers.

"The StandardToilet provides increased comfort through promoting the engagement of upper and lower leg muscles which helps reduce musculoskeletal disorders."

And if you think the squatting thing is a little too much...

Gill added this: "Thirteen degrees is not too inconvenient, but you'd soon want to get off the seat. Anything higher would cause wider problems."

So doesn't it make sense that our bodies will naturally adjust to the position and then we'll be able to sit on the StandardToilet for longer? Bet you didn't think of that one, Mr. Gill!

But this seems to be a serious problem...

According to data websites, employees in the UK, particularly London, spend about twenty-eight minutes on the potty.

That averages out to about two hours per employee, per week!

So the numbers do in fact, add up. However, there have been people who oppose the idea. Charlotte Jones, co-author of Around the Toilet, said that toilet breaks actually help employees.

"Viewing time spent in the toilet as a threat is the wrong way of looking at the issue entirely. I think the importance of the toilet as a refuge during the workday says more about inadequate workspaces, heavy workloads, and unsupportive management than it does about the workers themselves."

At least someone understands!

Users seem to agree with Jones as they took to Twitter to express their horror at the StandardToilet.

And they clearly didn't think about this, did they?

@RyanMorrisonJer No comments on how this may affect people in the workplace managing diseases that may require long… https://t.co/FYYRyM9iXW
— Gail Edington (@Gail Edington)1576621642.0

Just let us tinkle in peace for twenty-eight minutes, for Christ's sake! If you're in the mood to read more about how horrible workplaces can affect your health, then keep scrolling...