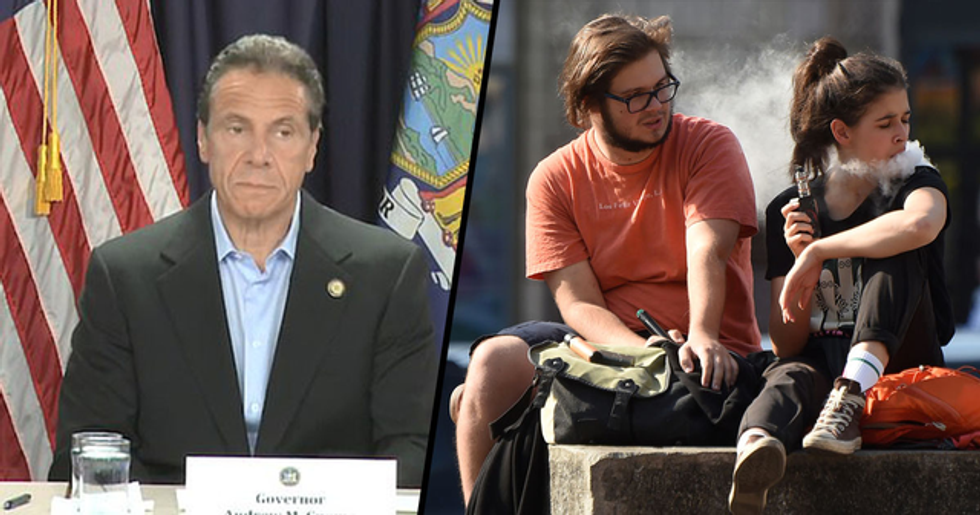 In the latest move in the war against electronic cigarettes, the State of New York has vowed to ban all flavored E-Cigarettes and vaping products.

In the last few months, we have watched in disbelief as more and more young people are admitted to hospitals across the country with severely damaged lungs and other internal organs... All as a result of using electronic cigarettes.

The use of these E-Cigarettes have become a nation-wide emergency, with politicians and governors anxiously debating what the next move should be.

And New York Governor, Andrew Cuomo, has evidently decided that enough is enough. Keep scrolling to hear what Gov. Cuomo has said about his decision, and why he thinks it'll help to improve the health of the next generation of New Yorkers.

Our country is facing an epidemic.

Ever since the first electronic cigarette appeared on our shelves back in 2007, our country has descended into a vaping frenzy.

With the promise of electronic cigarettes being a healthier and cheaper alternative to regular cigarettes, people were quick to throw away their Marlborough Golds in favor of the new and trendier nicotine fix.

The modern device was marketed on the premise of helping people kick their smoking habit altogether, rather than making them more dependent.

And now, a staggering number of us are hooked.

Roughly 10.8 million American adults are currently using E-Cigarettes, and more than half of them are under thirty-five years old, a U.S. study suggested last year.

And, in the last few years, the E-Cigarettes and vaping industry has skyrocketed to a $2.6 billion industry, the New York Times reported.

And the variety of fun and delicious flavors have made the devices even more appealing.

Because flavours such as strawberry, apple, cotton-candy, and bubblegum are much more enjoyable than the stale aftertaste of cigarette smoke, aren't they?

Yet, despite how enticing they may seem...

E-Cigarettes actually have a more sinister side. It has now been discovered that E-Cigarettes are just as harmful as regular cigarettes, if not worse. And, in more recent news, they have been found to be fatal.

For years now, researchers have been investigating the side effects of vaping.

And the evidence has been speaking out against the devices. Researchers have found that E-Cigarettes deliver an alarmingly high dose of nicotine, which will get the user inevitably addicted, and therefore more likely to pick up regular smoking. The Food and Drug Administration have even been warning that nicotine-induced seizures could be a rare side effect of vaping.

And nicotine is the least of their worries...

Even without nicotine, research has been suggesting that the flavorings and various other ingredients in e-liquids used for vaping could be linked to serious respiratory problems.

The CDC held a briefing on the rise of severe lung illnesses connected to E-Cigarette use and said that the number of reported cases had more than doubled in the last week to 450, from just over 200. The respiratory problems have now impacted residents in thirty-three states and 1 jurisdiction.

The exact cause of this mystery illness is still unknown...

But, the thing that doctors are sure of, is that it is being caused by electronic cigarettes. Health officials and doctors have been unsure of what exactly about E-Cigarettes is causing “healthy, young people to become ill," but the CDC said Friday that they are beginning to see trends. Most of the 450 cases involved a young person between eighteen and twenty-five who was initially thought to have a pneumonia-like infection that turned out to be a pulmonary illness.

The number of deaths linked to vaping is now up to 5 as the CDC investigates the 450 cases of severe lung illness reported nationwide. Three additional deaths were confirmed on Friday in Indiana, Minnesota, and California, following 2 previously reported deaths in Illinois and Oregon.

With more and more American's becoming sick from these devices every day, our government needs to put its foot down and make a change to laws on vaping.

And yesterday, New York Governor, Andrew Cuomo stepped up to the challenge.

It is the latest step in preventing young people from picking up the potentially lethal habit.

Cuomo had this simple declaration:

"Vaping is dangerous. At a minimum, it is addicting young people to nicotine at a very early age."

He offered some worrying statistics to support the move.

He stated that the various flavors on the market are clearly aimed at a younger audience.

And the ban has come in a response to the number of young people suffering from respiratory issues from the devices. "We do not know the long term-term health effects of the use of these products," Cuomo said.

All flavors are now been banned...

Besides tobacco and methol flavors. Gov. Cuomo stated: "Flavored products are highly attractive to young people. They are obviously targeted at young people, and they are highly effective at targeting young people."

And he is proposing a ban on all flavored E-Cigarette advertising.

Major vaping companies seem to be on board with the new law.

JUUL, a major player in the E-Cigarette industry, said they will review Cuomo's executive action, but spokesperson Austin Finan said, "We strongly agree with the need for aggressive category-wide action on flavored products."

Let's hope that New York will lead the vape-free revolution for the rest of the country because vaping is beginning to have majorly worrying side effects. One teenager from Florida recently made headlines when he was rushed to hospital with a collapsed lung... And it was all as a result of his vaping addiction. Keep scrolling to hear the terrifying story...