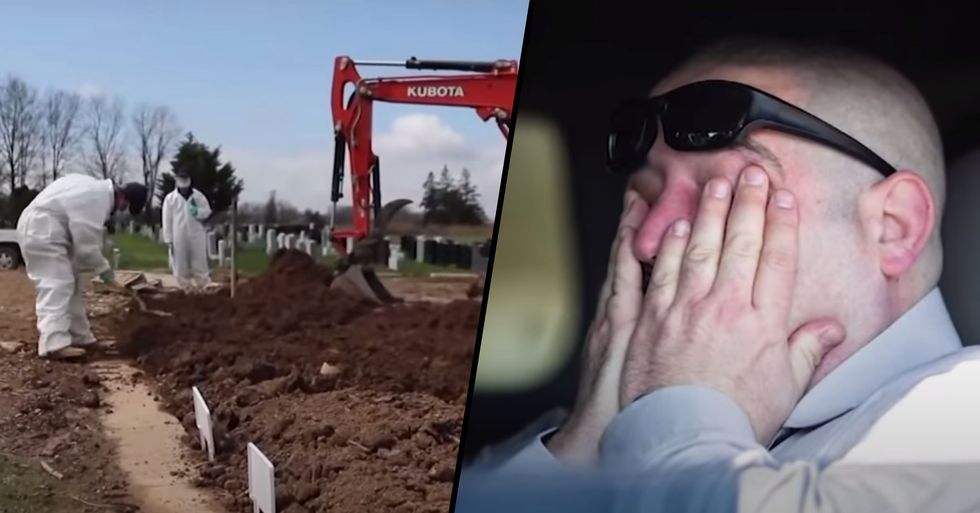 Over half of the United States is now in lockdown due to the uncontrollable spread of the deadly virus.

Thousands of people have now tragically lost their lives and New York City seems to be the epicenter of the crisis.

Now, tragically, a New York cemetery is struggling immensely to keep up with the unprecedented amount of burials required...

Scroll on for the devastating video...

Our country appears to have become the new epicenter of the global pandemic...

And without a doubt, we have become the hardest hit in the last 2 months.

This news came just weeks after President Trump said he wants the nation "opened up and just raring to go by Easter."

New York seems to be the hotspot for cases here in the States.

So much so, that from last month, those who have been in New York, specifically, the New York metro area, are being asked to quarantine immediately for fourteen days.

It's safe to say that the city is struggling...

But in the typical New Yorker fashion, communities are powering on through these difficult times.

It's no secret that healthcare workers are being worked to their limits...

New Yorkers have been delivering a huge round of applause across the city for their essential workers.

It is a terrible reality that deaths are so prevalent in New York City...

Morgues within the state are struggling to cope...

And under this immense pressure, the city has shortened the amount of time it will hold unclaimed remains before they are buried in the city's public cemetery.

A mass burial site has been built...

Normally, about twenty-five bodies a week are interred on the island.

These are for people who cannot afford a funeral or for those who go unclaimed by relatives.

But burial operations have increased massively over the last few weeks...

They have increased from one day a week to 5 days a week, with around twenty-four burials each day, said Department of Correction spokesman Jason Kersten.

City officials haven't explained whether the increase in burials is due to pressure on mortuaries to dispose of bodies more quickly.

Around forty caskets were lined up for burial on the island on Thursday, and two fresh trenches have been dug in recent days.

People have been left shocked by the footage...

And it has truly painted a picture of the harsh realities of this deadly pandemic.

Cemeteries around the state are also struggling...

And Mount Richmond Cemetery on Staten Island has been severely buckling under the pressure.

Last week, Mount Richmond had 10 burials in one day...

When on average, they would have around 2-5 burials in a day. This is absolutely shocking to hear.

All cemeteries in the area are struggling...

And they are all very quickly running out of space to bury the deceased.

Funerals at the site have now been restricted...

Rabbi Shmuel Plafker, who works for the Hebrew Free Burial Association, said to Inside Edition: "In this type of situation, families must remain in the car and I'm communicating with them by a cell phone. They cannot come to the grave and no one is actually shoveling, we're lowering the deceased into the grave and we really cover the casket."

This is honestly heartbreaking...

The fact that families are now unable to give their loved ones a proper send-off is terrible.

Our hearts go out to those who have lost their loved ones to this terrible pandemic.

Keep scrolling for further updates on the pandemic crisis in our country...