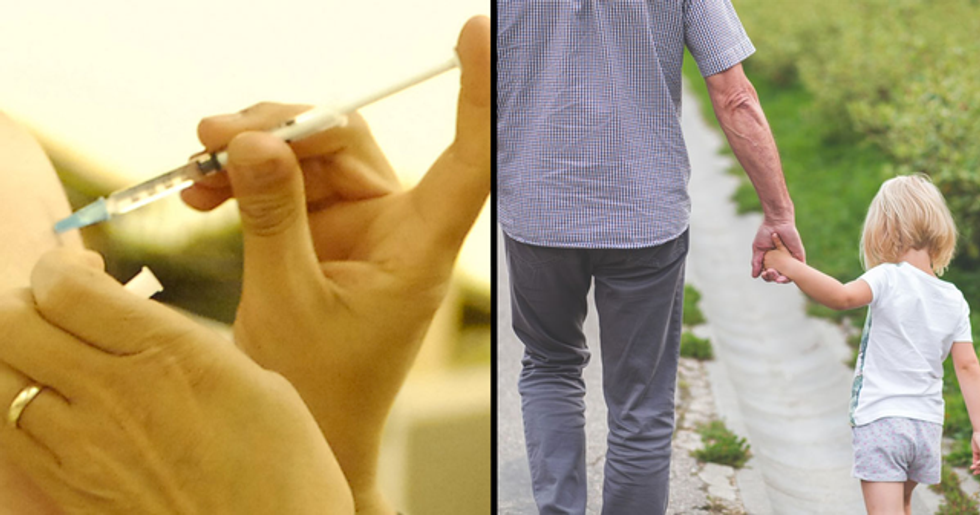 The anti-vaccination movement has long been the subject of jokes on the internet. Indeed, it does seem to perfectly sum-up the bizarre tendency towards conspiracy that access to the internet has brought out in some of us. But more and more, it's starting to look like the anti-vax movement isn't so funny after all...

The state of New York has been one of the first locations to feel the adverse effects of parents refusing to vaccinate their children. In Rockland County, there has been one-hundred and fifty-three cases of measles reported over the past winter, which is a massive (and unprecedented) spike. The reason for this? It's largely suspected to be a result of anti-vaxxers.

But now officials from New York state have decided it's time to take action against the outbreak. Starting from midnight tonight, they're banning anyone who has not been vaccinated against measles from any indoor public spaces - and the internet is blown away by this decision.

Vaccinations have been one of our greatest scientific achievements.

Being able to prevent infectious diseases before they even start is, frankly, nothing short of a miracle - and absolutely one of the contributors to our ever-increasing life expectancy.

And for a long time, we pretty much all shared this attitude.

After all, who wouldn't want to do the utmost to protect their innocent and vulnerable children from painful, dangerous, and sometimes even deadly diseases? It seemed like a no-brainer.

But in recent years, some conspiracy theorists have started making themselves heard.

A select (but vocal) few believe that vaccines are a method through which the government holds some kind of control over us. Some also claim that there are correlations between vaccinations certain conditions like autism.

It seems that people genuinely hold these beliefs.

And while it likely comes from an intellectually valuable standpoint - that we should question things, rather than just accept the things that we're told, - the lack of scientific basis makes all of this seem a little bit ... well, crazy.

There are a few growing conspiracy theories out there.

Many would lump anti-vaxxers in with flat earthers, as both have a similar disregard for empirical evidence and an inherent distrust in authority figures.

The idea that there's a lack of scientific proof is sort of laughable.

Many internet users take these anti-vaccination statements and turn them into online jokes, mocking the rejection of proven facts that anti-vax sentiment seems to represent.

Looking at one effect and trying desperately to link it to one cause, ignoring anything that doesn't fit into your theory along the way, is a sure fire way to come to some problematic conclusions.

Conspiracy theories are not necessarily a bad thing...

In fact, questioning the world around you is an essential way to learn more, and it's the basis of many scientific, technological, and social breakthroughs. But there's a time and place.

And when it comes to the opposition of vaccinations, it's problematic for many reasons.

While mocking anti-vaxxers online can be fun, it's not the most useful way of tackling what is actually proving to be a very real issue.

People are getting fed up with the movement.

Rather than sparking what could be a potentially interesting discussion has, instead, created what appears to be an unbridgeable divide, with no one side willing to listen to the other.

At its crux, this issue isn't really funny.

The ones who end up suffering are, by and large, the children of the conspiracy theorists. They are forced to go out into the world, unprotected from very real, very dangerous, and very preventable diseases.

One of the main threats? Measles.

Measles is a highly infectious viral illness, with symptoms such as a high fever, inflamed eyes, and a distinctive bodily rash. Most babies are vaccinated against it in a shot called the MMR (measles, mumps, and rubella).

The big issue is, by refusing the vaccinate their kids, anti-vaxxers are putting all of us at a greater risk, thanks to the highly contagious nature of many diseases.

And Rockland County, the country of New York that is the furthest south to the west of the Hudson, has experienced a shocking spike in the number of cases that it has seen since last fall.

The situation is so bad that officials have had to step in.

Rockland Country has issued a county-wide state of emergency as a result of these frightening numbers of cases of measles. The declaration came on Tuesday evening.

And their solution is a little unusual.

They've taken the decision to issue a ban on unvaccinated people in public spaces. Starting today, anyone who has not received the MMR vaccination will be banned from indoor public areas until they've received at least one dose.

There are, of course, some limitations on the ban.

The ban only applies to those under the age of eighteen, and anyone unable to be vaccinated on genuine medical grounds is excused. The ban also doesn't stand in open spaces like parks. The ban is set to last for thirty days, and anyone found in violation could be sent to the district attorney.

They posted their press conference on the county's official Facebook page - and, as you may expect, it's got quite a lot of attention!

The ban only applies to those under eighteen.

This makes it seem more targeted towards anti-vax parents, who are knowingly putting the community at risk because of their conspiracy-based decisions. More than 80% of those infected in the latest measles outbreak were under eighteen, according to Rockland County.

The report from Rockland County showed another frightening statistic.

More than 82% of those infected had not received any of the MMR vaccines - showing a clear correlation between anti-vaxxers and the spread of infectious diseases.

The MMR vaccine is renowned for its efficacy.

When administered over two doses, it's reportedly up to 97% effective - meaning if you have it, you're highly, highly unlikely to be able to contract the disease. That's particularly impressive when you factor in just how infectious measles is. According to some reports, those who aren't vaccinated have a 90% chance of contracting the disease if they come into contact with it.

These latest numbers are very frightening.

In his press conference, Rockland County executive, Ed Day claims, "this is the longest outbreak in the U.S. due to measles since the disease was officially eradicated in 2000."

Some have reacted very poorly to news of the ban.

As you'd probably expect, anti-vaxxers are not best pleased with the news, taking it as a personal attack rather than a public-safety procedure.

Some claim that the ban is misguided.

They take the view that measles can't spread from one healthy child to another - which isn't exactly the best science out there.

Based on this information, it does seem like issuing a ban may be the safest thing for Rockland County to do, given the circumstances.

Much of Twitter are very much in support of the ban.

And while many anti-vaxxers take it as a personal attack, the vast majority of people are just concerned with keeping children safe.

Vaccinations are a privilege.

Just found out there was a confirmed measles case at my son’s daycare. Wanna know who can’t get the MMR vaccine? My… https://t.co/omIKu2ZNGY
— MarylandMomma🧡 (@MarylandMomma🧡)1553522581.0

The fact that some children can't have them shouldn't mean that other's should choose not to - in fact, it should mean the opposite!

Especially as studies such as this have come out.

A new, large study finds that children who did not get childhood vaccines were more likely to be diagnosed with aut… https://t.co/QmID2eGq7l
— NBC News (@NBC News)1553482985.0

One of the primary reasons that anti-vaxxers have taken their stance is in an attempt to prevent autism - but it now seems the links are not just tenuous, but completely incorrect.

And while anti-vaccination is a real problem, we think that's it's still important that we can laugh...

Secret texting codes your unvaccinated kids could be sending: WYD- when you dying? LMAO-look measles are oncoming… https://t.co/SCuOOhrLh4
— steve (@steve)1553532390.0

But only after you've had your kids safely vaccinated, okay? Because kids getting sick (and potentially even dying) for totally preventable reasons isn't much of a laughing matter.