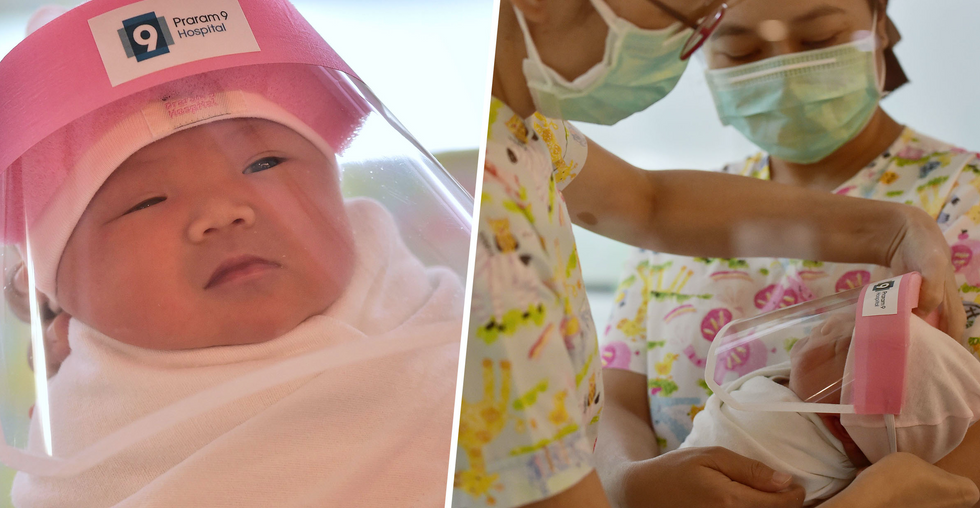 Newborn Babies Given Mini Face Shields to Protect Against Coronavirus

With the worldwide pandemic continuing to developing, countries are trying to find ways in which they can protect their population.

Bangkok has had a new idea to help protect the youngest of its population, newborn babies.

Keep reading to find out how...

And without a doubt have become the hardest hit.

President Trump's goal of having the nation "opened up and just raring to go by Easter" seem further away.

According to the BBC, New York now has more coronavirus cases than any single country outside the US.

It's especially worrying for those due to give birth anytime soon.

Being in hopsital it is possibly more likely for mum or baby to catch the virus.

Which is the last thing you want for a newborn baby.

However, one hospital in Bangkok has an idea to help protect the babies.

They are equipping newborn babies with plastic face shields in the hope of helping to protect them against the virus.

Nurses at the Praram 9 Hospital in Bangkok began posting photos of the nurses with the babies in a protective shield.

As it is such a good idea, it didn't take long for others to catch on.

As another hospital in the Samut Prakarn province has also adopted the same technique.

This comes as Thailand saw an increase of 50 new coronavirus cases as well as the death of a 43-year-old woman.

Since the outbreak lost control in January, Thailand has reported a total of 2,473 cases and 33 fatalities.

Fairly low in comparison to some other countries.

The projective shields were such a good idea that Praram 9 Hospital has to share it.

Hopefully inspiring others to try it.

“We have extra protection measures for little ones and friends, with face shield for newborns. So cute!"

We agree, a good idea and they look very cute! For a more uplifting look at the current pandemic...scroll on.