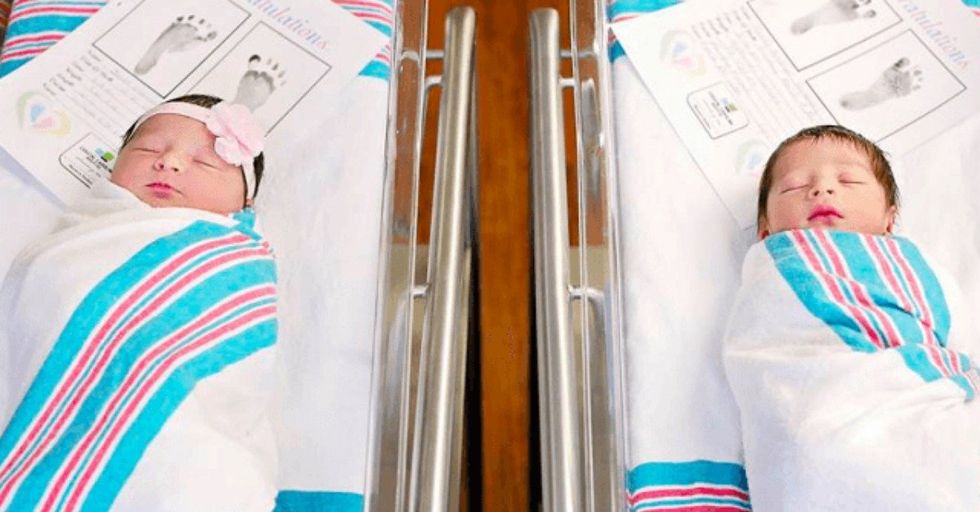 Babies Born Next To Each Other Get PERFECTLY Coincidental Names

There are many Shakespearian plays written about young love, but this perhaps the youngest story that's ever been told...and it's so sweet it will probably make your teeth ache.

Coincidences happen all the time.

But what one person calls a coincidence, another may call something else entirely.

Others call it fate.

Many of us may not adhere to one belief or the other, but rather lie somewhere in the middle.

When two babies were born at roughly the same time, they shared a bond that still has many bickering about that very question.

Is it fate, or is it coincidence?

You can be the judge of these two babies who may, one day, become star-crossed lovers.

Is it in the stars? Or is it nothing more than a name? You be the judge.

But first, you'll need all the info on this wonderful happenstance.

So let's dispense with everything else and tell the tale of these fateful(?) babies!

Clayshulte took to her Facebook and posted the sweet photo of the two swaddled newborns lying next to each other, and the magical coincidence that she just had to capture.

“I go into the hospital every Monday Wednesday and Friday morning to provide sessions for any moms who would like them," Clayshulte said. "Both parents had hired me to do their sessions that morning when I realized what their names were!"

“We had picked the name out months ago," Juliet’s mom, Christiana Shifflett, told ABC News.

“We wanted a J name to go with our son’s name, Jonas. We picked Juliet because we were watching the TV show Psych and the character’s name is Jules."

Romeo’s parents, Morgan and Edwin Hernandez, similarly knew what they were going to name their son months ago.

“It’s funny because we didn’t even name him Romeo after Shakespeare," said Morgan. “We named him after a singer named Romeo Santos that my husband and I both love." Not only were they born within 24 hours of each other, but the moms also just happened to be in adjacent rooms, making the story even more fateful.

Luckily there's no tragic end of star-crossed lovers, but instead a tale of wonderful coincidence — and two happy, healthy babies.

How cute is it?

Yup. "So" cute. No matter which side of the aisle you sit on, you can buy into that.

Do they grow up to be lovers?

That would be fitting, wouldn't it? I think that would stack the deck in the favor of "fate" over "coincidence."

Or do their names have life imitate art and send them towards the stage?

Would that be fate as well? It's for you to decide, but clearly, the stars hold SOMETHING for these two marvelous additions to the universe.