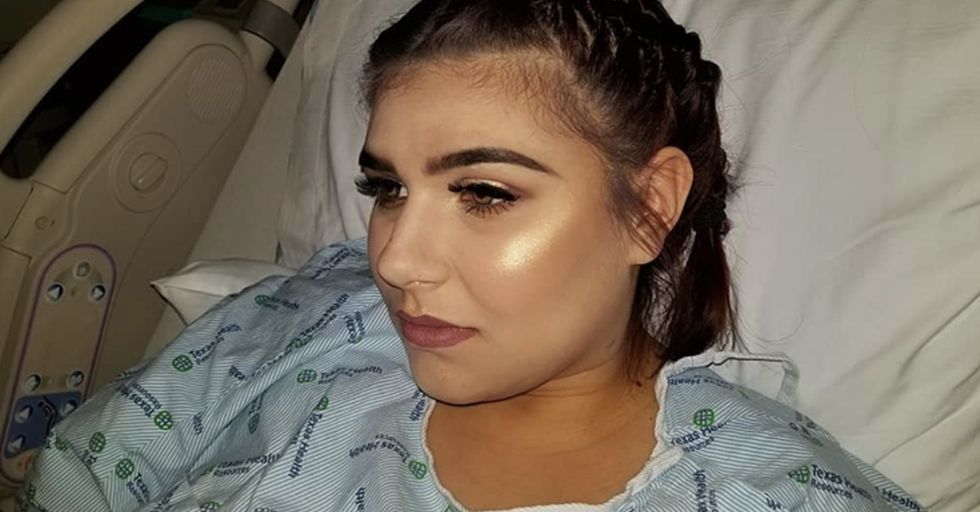 When you think about a woman having a baby, you think of frazzled hair. Bags under the eyes. Oh, and a new person who is all of a sudden alive when they were not alive before. But mostly it's the way the woman looks, right?

Okay, so I'm being a little facetious there, but there is a lot of pressure for women to look good at all times, and while that's pretty gross, some women are aware of it and taking steps to counter-act it. A lot more women are taking steps to look more beautiful in the delivery room, and leading the charge, as they so often are, are the beauty bloggers.

We're seeing more and more women putting on makeup and getting mani-pedis and doing other beauty-based treatments just before they deliver, but the question is — is it really time to focus on your looks when you're delivering a human being into the world?

Giving birth is a normal and beautiful part of life.

But women are rarely at their most gorgeous while they do it.

But giving birth is going to be one of the most photographed moments in any woman's life.

When you're giving birth, you're going to have family members scrambling on top of other family members to snap a picture. That hospital room will be turned into a madhouse.

That means most new mothers are going to be in rough shape for the picture that is going up on their grandparents' walls and best friends' Facebook pages.

And once again, that is totally understandable! Most women are laser-focused on the whole "literally creating a new life and bringing it into the world" part of the gig.

But a lot of women are changing that.

Some women have decided that instead of looking exhausted, they're just going to feel exhausted and look gorgeous when they give birth. Makeup in the delivery room is all of a sudden a thing.

And there are numbers to back it up.

A study by Cosmetify (by way of Harper's Bazaar) suggests that "64 percent of women aged 18 to 31 will also get a beauty treatment" such as "hair removal (65 percent), spray tan (37 percent) or a blow-dry, cut or styling (32 percent)" before they deliver.

"Two-thirds of mothers-to-be, aged 18 to 31, will also invest in beauty treatments ahead of the big day...

A lot of pregnant women have a bag packed and ready for when they go into labor, and now it'll have to be big enough to carry all their beauty products too.

"... with half getting manicures or pedicures...

This makes sense. The hands are the only part of the body that doesn't change a lot during pregnancy, so they can always be tended to. That's why so many OBGYNs are super judgmental about your nails.

"... and a third opting for spray tans," according to The Daily Mail

You want to teach your newborn baby about the importance of getting out into the sun, right? What better way to do that than by example? Fake, spray-on example?

And there's plenty of evidence for this trend online.

Here's beauty blogger Alexis Jayda making her beauty preparations for birth. She's got them Youtube cameras pointed right at her, meaning the internet is presumably going to be there for every last push.

And honestly, she looks great.

Much better than the baby.

Not that the baby should look good!

It feels a little bit like when you show up to a party really overdressed...

This is just so embarrassing, right? You get dressed to the nines, only to find out it's a jeans-and-button-up-and-sneakers-with-holes-in-them sort of party?

... and make your friend feel bad because they came to the party covered in embryonic fluid.

It's especially bad if it's a jeans-and-button-up-and-sneakers-with-holes-in-them-and-also-everyone-is-covered-in-embryonic-fluid sort of party.

Her doctor is going to come in and be like "daaaaaaaaaaaaamn" and no one will know if it's because she looks so good or because he just lost a patient.

Alaha Majid did plenty of makeup to get ready of her baby's birth.

That sure feels like a lot of makeup colors. Do we think Alaha always have this many colors in her makeup palette, or does pregnancy make you crave colors you normally don't like when you're not pregnant?

She even got her husband in on the process.

God bless this man for helping his wife out when she needs it. This is going to earn him some karma when she squeezes his hand too hard and he cries and has to run out of the room.

All new mothers look gorgeous because there's a sort of glow — some combination of happiness and relief and excitement — emanating out of them. But I just now learned that there's a stack modifier to that glow when your makeup is also on point.

And thank god she chose to meet her newborn baby looking more like this...

This is a great look — it makes all her best features look crisp and defined. A+.

This is a bad look — it makes all her best features look bloody and horrific. F-.

But is it normal to look beautiful at all times?

It could be argued that giving birth is a time when, naturally, a woman looks exhausted. I mean, she is doing an exhausting thing! We want people to look like the thing they are — ask Sonic the Hedgehog fans.

Maybe there are times when it's actually weird to look beautiful?

To be honest, it does look a little off, seeing someone with perfect makeup in a hospital with their newborn. Context is everything — would you be comfortable seeing a hottie in a place where people are usually looking all ugly? Like, say, a buffet? (I feel like, if you're making yourself up to go out to eat, you're not going to a buffet.)

So... is it vain to do yourself up before giving birth?

I wonder how much of this "off" feeling comes from thinking that women should not be focused on beauty when they're giving birth, but should be instead focused on giving birth. Maybe on some level, we feel like these women are too focused on their appearance?

You have to imagine this weirds the baby out.

All they've ever seen is the wall of a womb and maybe their twin. And you just have to know that twin wasn't getting all dolled up.

But if these women feel better looking beautiful in the delivery, who are we to tell them they're doing it wrong?

Whatever anyone wants to do to make themselves feel better is A-okay in my book. And if some people get weird about it, it says a lot more about them than it does the target of their judgment.

It's what I'd say to someone who did overdress at a party: you gotta do you.

Sometimes you just have to know what will make you feel the best, and maybe that means wearing your finest sparkling dress and walking confidently into a party filled with people in jeans and button-ups and sneakers and embryonic fluid.

Maybe looking good will help these women who are seconds away from becoming mothers relax about the process?

Giving birth is a crazy, crazy thing. Who cares what it takes to help women get through it? I think pregnant women should be legally allowed to commit crimes once their contractions start.

Here's an example: when her sister-in-law's was ready to give birth, makeup artist Tegan Woodford did her makeup.

Tegan's siter-in-law was, "so relaxed that her contractions sped up to every few mins and we then had to race to the hospital - She was 7cm dilated!" And according to Tegan, "getting your makeup done whilst in labour relaxes you, speeds up the process and you look good."

And honestly? Maybe seeing their moms made up will inspire some babies to step it up a bit.

Now that I think about it, I can't remember the last time I saw a baby who even had makeup on, let alone was actively working to build their brand as a Beauty Influencer.