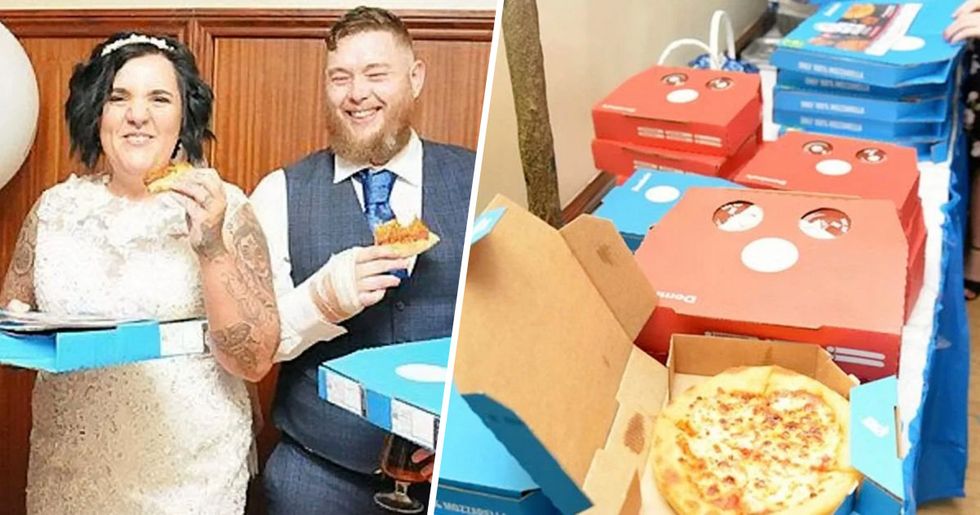 There's a mountain of things to arrange, and they end up all looking fairly similar, and we all know that weddings require a lot of standing around and waiting to be fed.

The food is always one of the most eagerly anticipated parts of a wedding, so what's the point in branching out on a fancy 5-star meal when you can just order from one of the best pizza joints there is?

A couple from Britain saved themselves a lot of money by splashing out on a huge Domino's pizza feast for their guests.

Fast food is the nation's favorite...

There's just something about greasy junk food that gets the entire nation, as well as the majority of the world, drooling in anticipation.

People go crazy over this kind of food...

Pizza, burgers, fries, and chicken nuggets are some of the world's most popular takeout foods.

A lot of people eat nothing but junk food.

So this won't stop them when it comes to celebrating their big days...

One bride loved chicken nuggets that much...

That they became a big part of her wedding day! Blair Hardy married her partner Adam Tyson in Ohio earlier this month, and it's safe to say that Blaire had a passionate love for not only her new husband, but also for them savory deep-fried chicken snacks.

Blair's Maid of Honor came up with an ingenious nugget plan.

Revealing her thought process to Insider, Jenna Spetz explained: "Blair has always LOVED dino nuggets and was marrying a man with the last name Tyson, so it really was a match made in heaven."

Blair's cousin Jenna struggled to keep the big secret, but she held her tongue. Even during the wild bachelorette party, Jenna managed to keep her brilliant plan under wraps.

Being a maid of honor comes with a lot of pressure.

So it was a relief for Jenna when the good people at Tyson foods said they would be more than happy to help out with her nugget related plans.

Tyson even offered to make the bouquet.

As wonderful as the chicken nugget bouquet was, that was only the beginning of Jenna's nugget surprise.

Jenna's speech blew everyone away.

Jenna planned everything down to a T. To keep Blair from seeing the bouquet, Jenna had her wife keep it under wraps in a box.

Clearly chicken nuggets are the way to this girl's heart.

An embarrassed Adam couldn't take his bride's bouquet seriously. Although even he couldn't deny how wicked the other part of Jenna's surprise was...

But another happily married couple have recently given Blair a run for her money...

Victoria and Tom Browne, who are from Cornwall in the U.K. got married this month and they also opted for something a little more greasy when it came to the food.

The couple decided to scrap the traditional idea of a wedding breakfast...

The couple had £350 ($452) to spend on their wedding breakfast and so Victoria called up Domino's to ask what they would be able to get for that, and the answer was quite a lot.

They wanted something "unique."

Twenty-six-year-old Victoria, who has 3 children with new husband Tom, said: “Most people know me and Tom just don’t do anything originally. I didn’t want traditional sandwiches or anything at the wedding, I wanted something that stood out."

Turns out, Domino's cater for weddings...

“We actually kept joking saying ‘shall we have dominoes?’ but as it got closer and we didn’t have any food plans we started seriously considering it and I emailed Dominos asking the question," she went on to say.

On the big day itself, Victoria and her new husband said that staff came “strolling in and shocked everybody."

The amount of pizza was endless...

They said the food was delivered "piping hot" as staff laid out the whopping 30 large pizza boxes, 20 garlic bread, 20 boxes of chicken strips and 20 boxes of wedges accompanied with copious amounts of Domino's classic dips.

Guests were a little skeptical at first...

And a lot of the guests thought it was one big joke, but they soon realized the feast of pizza was here to stay.

All doubt was quickly diminished when the smell of pizza filled the venue...

There wasn't a displeased guest insight, and there also wasn't a single slice of pizza leftover!

It looks like Domino's is the new wedding caterer of the year!

"I was surprised at the amount they delivered, I thought 'we're going to have to take this home and have it for a couple of weeks'," Victoria said. "We would have ended up having to bin it which would have been devastating for me." It's safe to say that the newlyweds won't want to look at pizza for a very long time now!