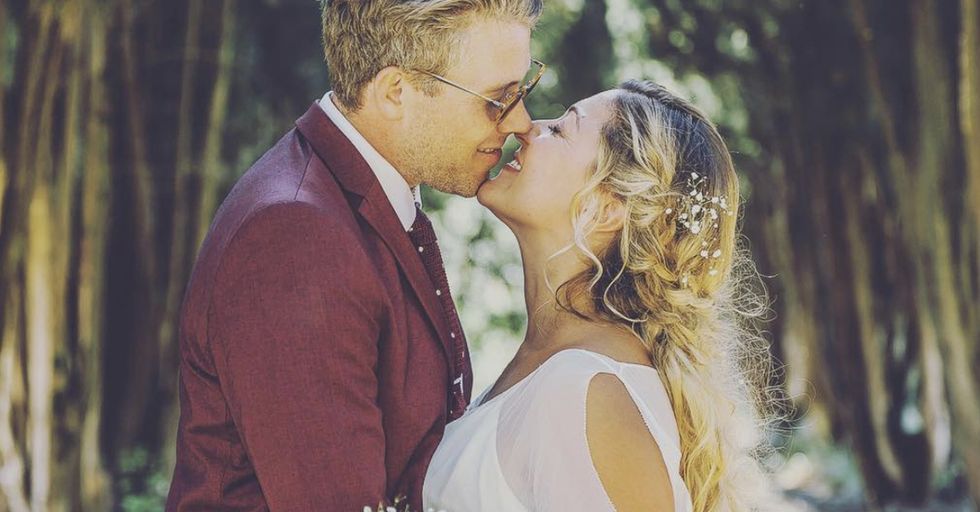 When I was a just kid, my parents took my family on a cruise to Mexico. We had a great time, I had my first taste of tequila (explaining a lot), and when it was all time to pack up and go, the cruise director notified us that if we wanted to keep our bedsheets, we could purchase them for a reasonable cost.

"Why would anyone purchase bedsheets from a cruise ship," I wondered aloud to my mom. Her response: because some people want to keep the sheets from the first time they boned (her words, not mine) -- and a lot of honeymooning couples go on cruises.

But a couple from the UK took that longstanding tradition to the next freaking level. And I'm not talking they bought a mattress, a bed, or even a permanent room at their honeymoon bed and breakfast. Instead, they bought the whole dang hotel.

They met, they fell in love, they decided to get married. As one does.

After their marriage, they decided to take a honeymoon to Sri Lanka.

A beautiful island off the southern coast of India. How very British of them.

The island is filled with amazing culture, beautiful beaches, and incredible scenery.

Pin this one up on your vision board, folks. It's one to remember.

So much so, that they planned on backpacking all around.

A three-week excursion throughout Asia sounds like a dream -- and that's what the couple thought too.

During their honeymoon, they started drinking -- a lot.

As one does. And these are British honeymooners, so you know they were going extra hard.

They quickly fell in love with the little BnB they were staying in.

And who wouldn't? This place has charm like no other. And it's right on the beach!

They got talking with the owners and said that their lease on the location was ending soon and they wouldn't be renewing.

This tragedy could not stand. Who was going to keep this cute place open after the current owners moved on?

Especially since the place was so fun at night.

In fact, the couple ended up downing twelve *glasses* of rum before the end of the night.

Is a glass a unit of measurement for hard liquor now?

Because if it is, I will throw up after approximately 0.79 glasses.

You know how mom used to say, "nothing good happens after 1 am"?

Well, nothing good happens after 12 glasses of rum. Except for this.

The couple got so smashed that they ended up signing a three-year lease on the hotel.

I've heard of couples buying a house after they get married, but this is on a whole other level.

Buying (or leasing) the hotel wasn't that expensive either.

Honestly, if that's how cheap it is to run a hotel, sign me up.

That's less than I pay to share a place with two other gross men in Los Angeles.

If you're thinking to yourself, "surely they could have backed out of it," you'd be right.

Except, you know, the next morning when they were signing the paperwork, they were still kinda drunk from the night before.

And on top of that, they kept the drinks flowing even in the morning.

Hair of the dog has never been so expensive.

They even needed a translator to get through the sale.

How did no one stop this from happening?? On the first day of their vacation?

"Because we didn't understand most of the conversation, Mark and I just sat drinking more rum and slowly getting drunk again."

Not gonna lie, this sounds like the best way to have a vacation. Next time I go to Mexico, it's rum o'clock every o'clock.

The couple learned they were expecting their first child only three months after their honeymoon.

"Our friends and family think we're idiots and shouldn't have been doing it," Lyons told the Mirror. "We owed a lot of money from the wedding and only lived in a tiny flat, and now we had a baby on the way."

Despite the stresses involved in running a hotel thousands of miles away from their home with a baby on the way and a wedding to pay off, the couple still went through with it.

This all went down back in 2017, so their baby has been born and the hotel is now theirs.

And they seem to be doing a great job!

They paid off the first half of their lease in 2017, and the second half this past month.

They still have about two years left on their lease.

They went all in on their purchase too.

The couple enlisted the help of family and friends to renovate their new hotel.

After spending over $8000 to remodel, the hotel finally reopened its doors three months after the purchase.

And look how cute it is! I wish we had some before pics, but I love how colorful everything is now. I want to go so bad!

They renamed it the "Lucky Beach Tangalle."

After perhaps the night their child was conceived?? ?

We're not here to speculate, but...

Y'all certainly are welcome to!

The newly refurbished hotel has seven rooms and was converted into a BnB instead of just a standard hotel.

A tiny cute hotel, some breakfast, a mimosa, and the beach in the morning sounds like a freakin dream.

The couple says they've had a steady stream of customers since reopening.

So this really is happily ever after in the end.

And despite the venture working out so well, they insist they plan to make the decision to expand when they're actually sober.

Idk, maybe this is one of those "write drunk, edit sober" situations, where you should just make all the big decisions schwasted and clean up your own mess the next morning. That's how I tend to live my life.

Would you stay here? I know I would!

Was their decision irresponsible?

I mean, obviously it was, but it worked out, so maybe risks are the way to go. Let us know what you think! We're always curious.