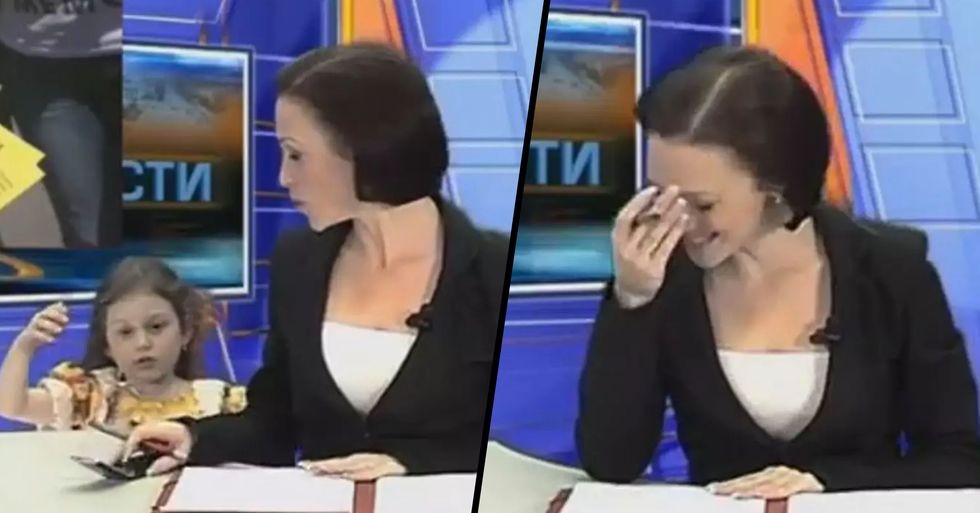 Newsreader's Daughter Interrupts Bulletin to Say She Has a Text Message

Sometimes, getting childcare while you're working is easier said than done, and this is something that news anchor,  Anna Kizilova, knows all too well. The presenter was forced to bring her daughter to work with her and the result made for highly amusing viewing for those watching the news broadcast at home.

The clip is both hilarious and adorable. Keep scrolling to see what the little girl did that has cracked up so many people...

Children in the workplace isn't a great combination.

In an ideal world, we'd get childcare to cover it, but that isn't always an option.

It's hard enough to get children to behave as it is.

Keeping an eye on them at home is one thing... but at work? Well, that's a whole other story.

It's safe to say that childcare can be a struggle.

And this story proves that in the best possible way...

Anna Kizilova knows the reality of the lack of childcare all too well.

Anna reads the news for channel TaghilTV in the city of Nizhniy Taghil, located in the south-western Russian region of Sverdlovsk Oblast.

But one day, she couldn't find any childcare.

Speaking to Central European News, Anna explained that she had had to pick up her young daughter from kindergarten before returning to work. "I wasn't married at the time and my mum lived on the other side of town so there was no one I could leave her with when I had to go to work," she explained.

She had no choice but to take her daughter into work with her.

Which turned out to be a recipe for disaster.

At first, all was going well...

But that all changed when live on air, Anna was interrupted by her daughter.

The adorable moment was, of course, caught on camera, and has since gone viral.

In the clip, which was filmed back in 2012, Anna can be seen reading the news...

Then, all of a sudden, her little girl saunters into shot holding out a cell phone for her mom.

At first, her mom hasn't noticed...

But as soon as she does, of course, she then tries to move her daughter, Elizaveta, out of shot.

But her attempts come to no avail.

The little girl then informs her mom she has a text message.

"But mum, you have a message."

She then drops the phone in front of her mom

You have to admit, not only is it pretty amusing but it's totally adorable too.

Anna then struggled to get through the rest of the bulletin.

At one point, she even breaks down laughing.

Following the broadcasting blunder, Anna admitted to being scared she'd get fired.

But it turns out the team actually found the cute interruption hilarious. "I was worried about losing my news role, but the producer asked the team about the public reaction and was told that it had been positive," she explained. The star has also shared a snap of what the little girl looks like now, keep scrolling to take a look.

Despite being filmed quite a few years ago...

The clip resurfaced again on social media recently and has become something of a viral sensation. Keep scrolling to take a look...

But Anna says she has been astounded by the popularity of the clip.

"I just posted the old video, filmed in 2012, not realizing it would be so popular," she said.
"It quickly spread online and a local journalist was told about it and called me to ask for the permission to use it."

People who viewed the clip have had some strong reactions.

Many commented on how cute the little girl was.

And it looks like she'll never be able to live this down.

We could watch it over and over. Want more parenting news? Keep scrolling to find out more about the ingenious way one mom managed to stop her kid from crying...