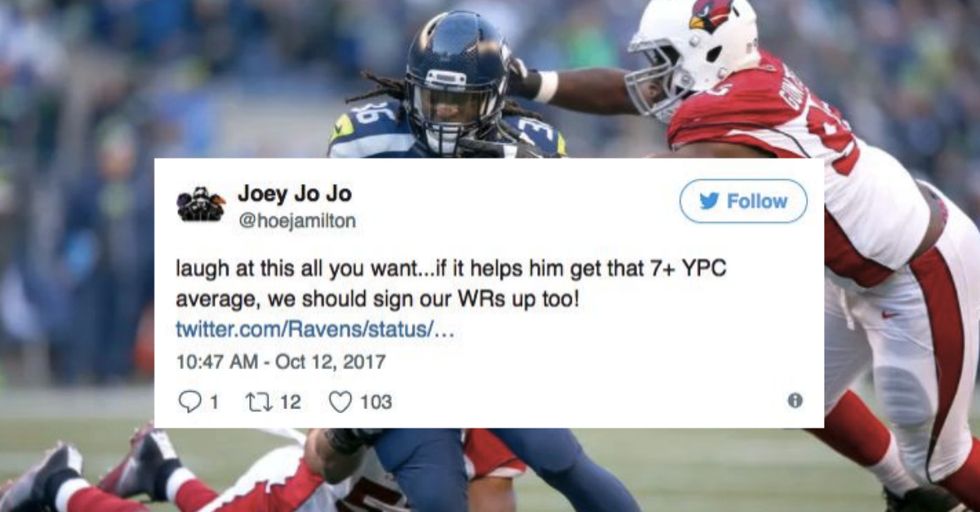 Alex Collins, a 23-year-old running back for the Baltimore Ravens, has a secret tool for staying nimble on the field. While other NFL players practice their footwork by running sprints and doing agility drills, Collins prefers a more time-honored tradition: Irish dancing.

That's right, Collins is going all Riverdance on his competition.

According to his teammates, Collins has been dancing for a year, and he's pretty good. But there's another benefit of learning those fancy-foot moves — he can use his skills to help other dancers.

.@Budda03 has a unique skill set for an NFL RB: Irish dancing How it helps his footwork & makes him an inspiration:… https://t.co/wqskSn0DBz
— Baltimore Ravens (@Baltimore Ravens)1507829097.0

Twitter user @JoanneTubbs reached out to Collins to ask if he had any words of advice for a 12-year-old boy getting bullied because of his passion for Irish dancing. Joanne added "Maybe a shoutout to dancer Carl from you would help?"

Never stop doing the things you love because someone else doesnt agree. chase your dreams Carl and don’t let them s… https://t.co/6WHVbEX3DT
— Alex Collins (@Alex Collins)1507340514.0

"Never stop doing the things you love because someone else doesnt agree," Collins tweeted. "Chase your dreams Carl and don’t let them stop you from being great!" Helpful words indeed.

We're sure Carl appreciated the gesture, but other football players might want to take note.

According to Louisiana's Health and Fitness magazine, Irish dance has been linked to many health benefits, including "... improved heart and lung condition; increased muscular strength, and improved muscular tone; increased endurance and aerobic fitness; better coordination, agility and flexibility; weight management; and even a decreased risk of osteoporosis." Put on your dancing shoes, people!