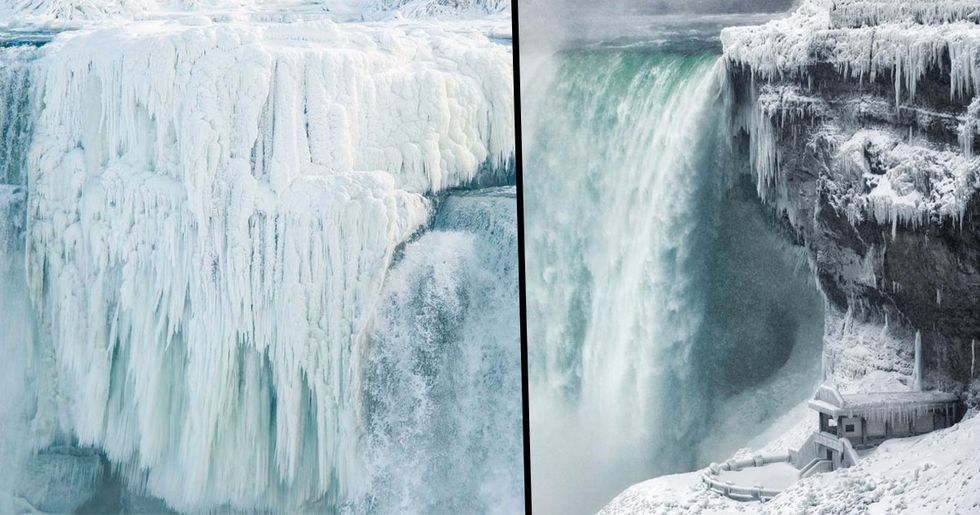 The Niagara Falls Have Frozen Over And The Photos Are Incredible

If you live in the northern hemisphere, it's likely you've been feeling the chill over the past few days. And when you're shivering and suffering, it can be hard to see any upside to what seems like an interminable winter. In fact, it's all too easy to wish the whole season away, dreaming on sunshine and sitting in parks once more.

But winter does have some benefits - as we've seen recently. Because the recent cold spell has caused something quite beautiful to occur. The Niagara Falls, in Ontario, Canada, have totally frozen over. In one of nature's rarer events, the cascades of water has been turned into what looks like Gothic ice sculptures. It's really a sight to behold.

Clearly, the internet agrees. For the past few days, people have been sharing their snaps of the natural phenomenon on social media. Want to take a look at the incredible views? Read on.

Niagara Falls is one of nature's most famous landmarks.

The name actually refers to three waterfalls - the Horseshoe Falls, the Bridal Veil Falls, and the American Falls, which may explain their large size.

The Falls are located on the US-Canadian border.

One side of Niagara Falls is in New York State, while the other is in Ontario, Canada (near to Toronto).

The Falls are a hugely popular tourist attraction.

Niagara Falls are a huge part of Canada's identity.

Alongside hockey, maple syrup, and being stereoptypically polite, the natural wonder is one of the first things that comes to mind when you think of Canada.

Niagara Falls also have a place in popular culture.

And who could forget The Office?

Niagara Falls hosted longtime sweethearts Jim and Pam's secret wedding - before they went off to their actual wedding, which they had guessed their office-mates might have made a little bit weird.

Niagara Falls have a firm place in the collective consciousness.

There's just something magnificent about the amazing views - particularly when you consider that there has been no human intervention in their beauty.

But have you considered what happens to them as temperatures drop?

Canada and New York State have a reputation for some of the world's most brutal winters - so it seems natural than Niagara Falls would be privy to some particularly harsh weather during the colder months.

Yet we tend to think of them as a summery location.

The majority of times we think of Niagara Falls, we picture something more like this. Clear, blue skies, sun shining, and the waterfalls... well, falling.

So what happens when things get chilly?

Well, these past few days have answered our question. This week, temperatures around the world have dropped to the lowest we've seen this winter.

You know things are serious when even Canadians are worrying about the drop in temperatures and inclement conditions.

You may be picturing the Niagara Falls winter edition as something like this.

Pretty cold-looking, for sure. But still very much a waterfall. Well, you'd actually be quite mistaken.

Some of the first impressions we had of the terrain were from this Instagram video.

In it, a boat traverses through the waters under the Niagara falls - and they seem to be pretty much frozen solid, plus with a thick layer of snow on top.

This view from the top of the falls was particularly spectacular, featuring surreal-looking clumps of snow.

Then the pics starting coming in thick and fast.

This one is a personal favourite, and shows mystical shards of ice alongside a partially buried-in-the-snow cabin.

People were keen to get a snap of the rare sight.

News outlets picked up on the story - asking many of the social media posters for permission to share the images.

This shot, more typically of Instagram fare, really puts into perspective how adverse the weather conditions are. While the other shots look a little bit other-worldly, this confirms that Niagara Falls really are frozen.

Everyone wanted a piece of the action.

Those who lived nearby ventured out on what has been called the coldest day of the year, in order to get some truly breathtaking pics.

Even official Instagram pages got in on the fun.

This shot, shared by the Niagara Parks account, is especially breathtaking. Just look how thick the layer of snow is on that spindly branch!

The images from the viewing platform were incredible.

The way the cascades of water appear to have frozen almost instantly is truly magical. In fact, it reminded some of a Disney classic.

People have drawn comparisons between the fantastical landscape of the animated movie, and the very real terrain of Niagara Falls.

Although these ones aren't real, they're almost as breathtaking as the shots of Niagara Falls this past week.

We can certainly see the resemblance.

When you consider that Mother Nature has created something that took animation professionals such a long time to painstakingly design, it really does seem miraculous.

It's hard to believe shots like this are real.

Honestly, the terrain seems like something out of a fairy tale. Or, like, an apocalyptic movie. One of the two.

We're a particular fan of the social media vids.

Something about seeing the terrain in a moving image makes it seem more... real?

Although we bet nothing compares to seeing them in real life.

Anyone else seriously tempted to book a flight to Toronto? For such a rare sight, it might just be worth it!

We could look at these mesmerising pictures and videos all day. Great job, earth!

Although it's clear these temperatures are no joke.

The extreme cold can be extremely dangerous, particularly for homeless individuals. Niagara Falls appear to be doing all they can to keep everyone as safe as possible during this cold period.

But at least there's one benefit to this horrendous weather.

We're sure Elsa would be loving it.

Although we don't have quite the same attitude. We hugely appreciate being able to look at these spectacular pictures from the comfort of the indoors.