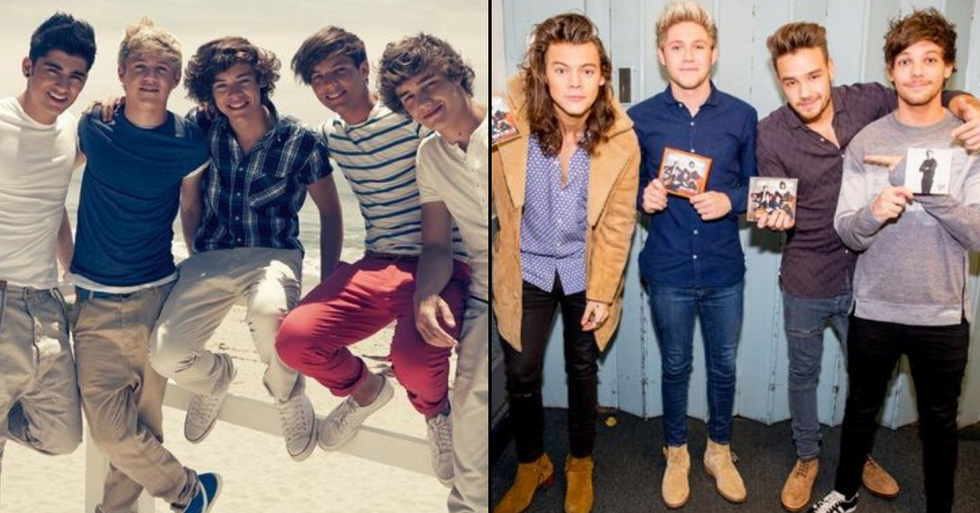 Niall Horan Reveals When One Direction will get Back Together

Imagine you were a teenager again.

What would you be doing? Studying, working a part-time job, experimenting with different hair colors, maybe even traveling? But there is one key aspect about that time that you probably forgot about and that's your unhealthy obsession with boy bands. Don't even try and pretend you didn't go through it. We all did. The Beatles, NSYNC, Boyz II Men, The Jonas Brothers, the whole lot of them.

One band stands out for me the most though and that's One Direction. After announcing their hiatus 4 years ago, it seems as if the band plan on getting back together - with one caveat, according to Niall Horan!

One Direction was the world's biggest boy band.

Of course, you remember the hysteria surrounding the band. From crazy fans to catchy pop songs, this band had it all.

They were formed on The X Factor.

The 5 members, first found the limelight on the UK television talent show, The X Factor.

Louis Tomlinson, along with 4 other contestants first auditioned as solo artists, but when they failed to make it through, they were put together as a band by the show’s producers. From left to right, we have Harry, Louis, Liam, Zayn and Niall, pictured at their album signing in 2012.

Up All Night, Take Me Home, Midnight Memories, and Four. They each became a number one selling collection.

They toured the world and became global icons.

In the United States alone, the band managed to sell 7.6 million albums and in 2015, the net worth of the band rose to $215 million.

It's safe to say that One Direction were one of the most successful bands of all time.

But when Malik left the band, the other 4 guys decided to carry on for a year longer releasing Made In The A.M which was their final album.

The band then called an indefinite hiatus.

December 13th 2016 was the final time they performed together as a band, ending their legacy on the stage in which they originally started.

The boys embarked on what they had originally hoped to when they audition for The X Factor.

Their solo careers. Each member went their own way and started producing music that they felt would best represent them as an individual artist and boy did we get a range of music. From R ‘n’ B to soft rock, we were given the whole lot.

And they've all finally found their feet in the industry.

Niall Horan was the first (post Malik's departure) to release his album. But as the other members spent time honing their craft, they quickly caught up to him. According to album sales and overall net worth, Harry Styles has come out on top.

However, it took some longer than others to settle.

Louis Tomlinson recently did an emotional interview with The Telegraph in which he exposed some of the inner workings of the band, his solo career including his debut album Walls, and his personal life.

He suffered tragic losses in his personal life which also impacted his career.

He opened about his grief and his mom's battle with leukemia. She died in 2016. "One thing I’ve learnt since losing her is that any decision, even if I knew the answer, I’d call her. “I didn’t realize how reliant I’d become on her. That was the hardest thing for me, understanding that living life after meant making decisions on my own."

But tragedy struck again as the family endured yet another death.

In March 2019, Tomlinson lost his younger half-sister Félicité, who died after an accidental drug overdose. She was eighteen-years-old.

He said they both impacted him in different ways:

"But I think dealing with the family, how I can be there for them, that was a lot easier the second time because the first time I was grieving and didn’t know what to say."

He rounded it up with what he believed worked for him during this time:

"I know the things I’ve been upset about in my life are s***, but I can’t change them, so you have to make the best of what you’ve got."

Throughout the interview, he also talked about how the break-up of the band hit him the hardest.

He said this: I was f****** fuming at first. We were working really hard – people have said overworked, but we weren’t overworked, that’s just what happens when you’re a band that size, though I understand. I thought I’d mentally prepared myself for a break, but it hit me hard..."

"About a week after, I sat there thinking, 'strike while the iron’s hot,’ but I wasn’t ready. I was bitter and angry, I didn’t know why we couldn’t just carry on. But now, even though I don’t fully understand everyone’s individual reasons, I respect them."

He said he would have been alright if they just wanted a little "break" instead of a hiatus.

"It if was up to me, yeah. I’d maybe have said, ‘Let’s have a year off.’ But yeah, probably. I’m sure there’s a better analogy out there but it’s a bit like shutting down Coca-Cola. You don’t say, ‘Right, let’s hang the boots up on that,’ because it’s a massive thing."

While discussing his new debut album Walls on The One Show, he was asked by the hosts if there was a chance of a reunion and the answer sent waves of excitement through the studio.

“We’ve been on a break four years, I’m only just getting round to releasing my first album. Fans who follow our every move every day probably feel we’ve not been a group for a while, but to us we’re… I know I am just finding my feet really."

"I think it’ll happen at some point, we’d be stupid not to. I think we’re kind of exploring and enjoying ourselves individually." Check out the video for Louis' new title track "Walls" where there is a clear homage to the band. Long live One Direction.

And now it seems Niall has offered his input.

Although hi discussion of the potential reunion is rather more jokey...

He was asked when the band would get back together...

And his answer was rather unexpected.

He references another U.K. boyband - the legendary Take That.

After they came back from their hiatus - turning from teen heartthrobs to hunky middle-aged blokes in the process - they had huge success.

"When they came back they looked better than they ever did."

"To come back as great as they did - you know, it didn't look forced."

"I would hate for people to be like, 'Here they are coming for the money - because they've spent it all.''"

"If and when we come back, it would be to bring the joy back to people who had missed us."

"And the fact that we could break the internet with that selfie!"

"I wanna do it when everyone is f**king ready."

"When I saw that Instagram that Jennifer Aniston posted with the cast of Friends, it kind of reminded of 1D, because they're the only ones that get it."

Niall has offered us some hope for the future.

Scroll on for all the details of what's going on in Harry Styles' love life ...