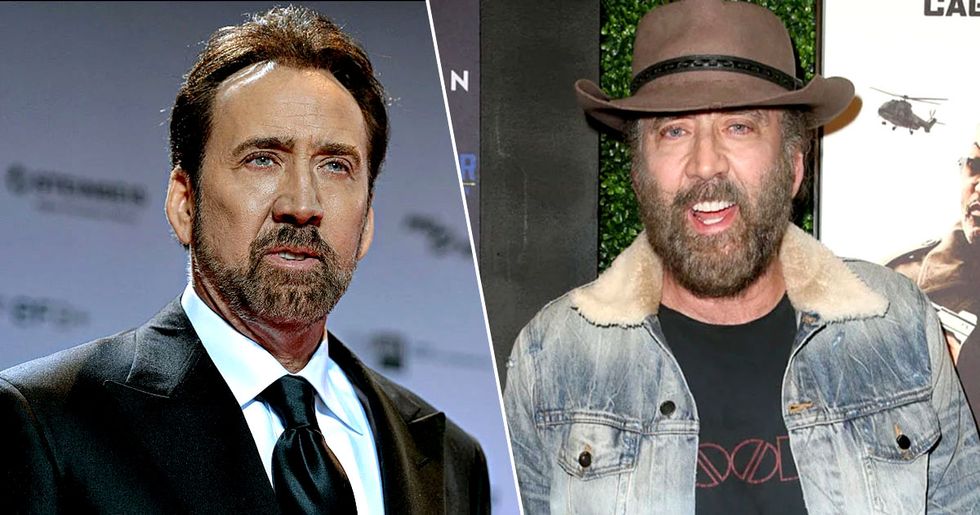 I mean, he wasn't totally unrecognizable. Obviously some people recognized him... he was let in, wasn't he? But, seriously, he looks so different. I bet his publicist had to persuade multiple security personnel that it really was the award-winning actor.

But now there's some very exciting news. It's no coincidence that Nic Cage is a man admired by the masses. He's a cult hero, an icon of unparalleled proportion, so I'm sure you'll be delighted to know: Nic Cage is in talks to star as Nic Cage in a film about Nic Cage. Yeah, that's one helluva tongue twister but by God I like it!

But, before we get to the gritty details, let us take a look at the very stylish life of the man, the myth, the legend, Nic Cage.

I think if there's one thing we can say about Nicolas Cage's different looks over the years, it's that the guy doesn't photograph well. A bit like me, I guess. Cage has a thing about looking awkward in most photographs of him. Some people just don't sit well in a pic, I guess. His hair and fashion are on point in this 1990s shot, though!

I wonder when Nicolas Cage stopped posing like this. I guess there must come a time when you become too old to lean against a wall in this way. I mean, it just looks weird, right? Even twenty-something Cage struggles to pull off the look.

Wearing blazers that were far too big for him became an iconic look for Cage. Pictured here, appearing on Saturday Night Live in 1992, this could have been the start of his big blazer craze. Personally, I don't get it but, eh, the '90s...

I've never thought that Nicolas Cage could have played James Bond, but, from this photo of him at The 50th Annual Golden Globe's in 1993, I'd say he had potential.

Here we see Cage getting interviewed by Jay Leno in 1994. He casually sports a bright purple oversized blazer. I swear, it gives him vacation-entertainer vibes.

What do you think? Does Mr. Cage pull off a goatee? Truth be told, the actor does have a bit of a weak chin. Although some men with weak chins mask it with facial hair, I actually think that Cage's goatee makes me notice it more. So it's a no from me.

Now that he's facial-hair-free, I have a newfound appreciation for Cage's dimpled chin! Plus, I think that it's safe to say, when Nicolas Cage gets suited and booted, he looks his best.

There's so much that I could say about this bizarre costume that Cage rocked up to the opening party of the Las Vegas Hard Rock Cafe in 1995. But, I mean, as ridiculous as I think he looks with his tweed cap and absurdly sized jacket, with model girlfriend, Kristen Zang, on his arm he gets away with it.

Do I smell divorce?

Now, before you think that Nic and Lisa Marie are dressed up for a fancy-dress party, think again. This kooky couple certainly made some interesting outfit choices while they were together. Pictured above, the pair attended an InStyle Magazine exhibition in 2001. I'm not sure that their outfits could be considered "in style" - but, then again, this was the noughties and everyone dressed terribly then, right?

I smell another divorce...

Sadly, I'm right. Cage's third marriage did not last either. After fourteen years together and having a son, Kim called it a day. But looks as though Cage handled it well, right? The nice, new, gold, leather jacket... makes him look... Well, frankly, I feel as though he looks like he's just grabbed a load of mismatched items from a thrift store. In reality, the outfit probably cost him thousands of dollars. Fashion is confusing. Wherever he got it, though, it reeks of "I'm newly divorced but there's some life left in the old dog yet."

Some people love being single, they appreciate the independence and the feeling of not being tied to anyone. I feel like Nicolas Cage is not one of those people. What is it with Hollywood men displaying their sad divorcee status with a grizzly beard and grown out hair (cough... Brad Pitt)? Cage is taking the "I'm single and sad" look to the next level with his lone-wolf denim jacket. I hope he's alright.

So yeah enough of this dallying about. Let's get to business. Let's get to the point. Nic Cage is in talks to play Nic Cage in a film about yours truly Nic Cage. Is there anything more beautiful than that? Trick question. No, there is not.

If the deal goes ahead, the real Nicolas Cage will play a fictionalized version of himself. A Cage who is desperate to seal a role in an upcoming Tarantino film. The fictionalized Cage is also dealing with a strained relationship with his teenage daughter. And also talks to an egotistical 1990s version of himself who takes the p*ss out of him for making too many awful movies and for not being true to himself.

This film has to happen.

I don't know about you but this film sounds too good not to happen. Sign the papers Nic!
20%