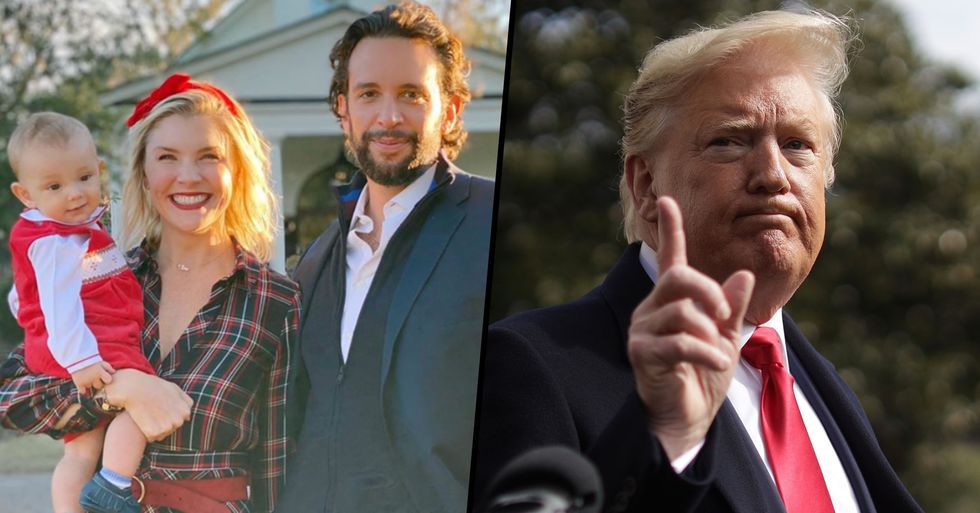 Take a look for yourselves...

The wife of the late star has spoken out after seeing Donald Trump's "disgraceful" tweet about coronavirus.

The post talked about the difficult journey she's been on since the outbreak of the disease.

The family have truly been through hell.

If you didn't know, Canadian actor, Nick Cordero, was best known for his broadway fame.

The star was born and raised in Hamilton, Ontario, Canada, going on to attend Ryerson University in Toronto for 2 years before leaving to perform in the band Lovemethod.

But he really shot to fame in the lucrative world of Broadway...

The star made his stage debut back in 2012 in the title role in the off-Broadway production of The Toxic Avenger.

And it was only up from there...

That same year Nick played the role of Dennis in the Broadway production of the popular show Rock of Ages.

2 years later, he was back on the stage once more.

Nick appeared in the musical Bullets Over Broadway in the role of Cheech.

His performance caught the eyes of critics.

In March 2016, he joined the Broadway production of Waitress, playing the role of Earl.

But he left Waitress to join the Broadway premiere of the musical A Bronx Tale, playing Sonny at the Longacre Theatre.

The couple tied the knot back in 2017 and now have an eleven-month-old son named Elvis together.

But, in March, tragedy struck the family...

Nick was hospitalized on March 30th.

It was initially thought that he had pneumonia.

But it was later discovered that he had tested positive for coronavirus.

Nick had been suffering from severe complications due to the deadly virus.

Just 2 days after he tested positive, he was intubated and put in a medically induced coma.

And sadly, that was only the tip of the iceberg.

On April 18, Nick had to have his leg amputated after suffering from blood clots as a result of one of the machines he was put on to save his life.

And if that wasn't horrendous enough...

Shortly after, he had surgery to get a temporary pacemaker fitted.

Things did start to look up at one point...

His wife Amanda announced on May 12 that Nick had woken up from his 6-week coma but still had a long road of recovery ahead of him.

Amanda had been keeping fans updated on the health of her husband on Instagram throughout his stay in hospital.

And she had been trying to remain optimistic throughout the whole thing. She also started a social media campaign to spread positivity and awareness about the dangers of the virus.

Just a few months ago, she tearfully shared on her Instagram Stories that Nick had faced yet another setback.

"Please cheer and please pray for Nick today, and I know that this virus is not going to get him down," she said. "It’s not how his story ends, so just keep us in your thoughts and prayers today, thank you."

As Nick continued to battle the virus...

He quickly began to deteriorate.

Nick suffered 2 mini-strokes, and most recently developed a lung infection as a result of the illness.

It became clear that his body was struggling to fight the virus.

It sadly got to the point where doctors told Amanda to say her goodbyes.

Nick had been battling for 2 months...

And devastatingly, on July 5th, he succumbed to the illness. He was just forty-one-years old.

His wife Amanda posted the following statement to Instagram announcement his passing:

"God has another angel in heaven now. My darling husband passed away this morning. He was surrounded in love by his family, singing and praying as he gently left this earth," she began the message.

"I am in disbelief and hurting everywhere. My heart is broken as I cannot imagine our lives without him."

"Nick was such a bright light. He was everyone’s friend, loved to listen, help, and especially talk. He was an incredible actor and musician. He loved his family and loved being a father and husband. Elvis and I will miss him in everything we do, every day."

She took a moment to thank fans for their support.

"I cannot begin to thank everyone enough for the outpour of love, support, and help we’ve received these last 95 days. You have no idea how much you lifted my spirits at 3 pm every day as the world sang Nick's song, Live Your Life. "We sang it to him today, holding his hands. As I sang the last line to him, “they’ll give you hell but don’t you light them kill your light not without a fight. Live your life," I smiled because he definitely put up a fight. I will love you forever and always my sweet man."

Tributes had been pouring in for the star...

The news has left fellow celebrities and fans heartbroken.

There has been an outpour of love from fans.

Horror. Love to the Cordero family. Please wear a mask. It has the power to prevent unspeakable suffering and sorro… https://t.co/xh16q9Zp5s
— Bradley Whitford (@Bradley Whitford)1594000951.0

It's such a tragic loss.

A GoFundMe campaign has been set up to support his family.

The campaign was originally set up in April, while Nick was in a medically induced coma.

The page started off with the goal of raising $400,000 but following his death, donations have shot up. The page was set up by family friend Erin Silver and 3 others to support Amanda and their son, Elvis. An update posted on Sunday said: "We are heartbroken to update this account to a memorial."

After losing her husband to the horrid disease, it was hard for Amanda to hear our President downplay it.

So when he posted the tweet above, she had no choice but to address it in an emotional post on her Instagram. She disabled her comments so people couldn't have arguments underneath such a sensitive post.

In it, she discussed how "disgraceful" Trump's comments are to people who have lost loved ones, including her.

She disabled her comments so people couldn't have arguments underneath such a sensitive post.

But that didn't stop fans from leaving supportive messages for the mother-of-one on other photos:

Our thoughts and prayers are with their family during this difficult time.