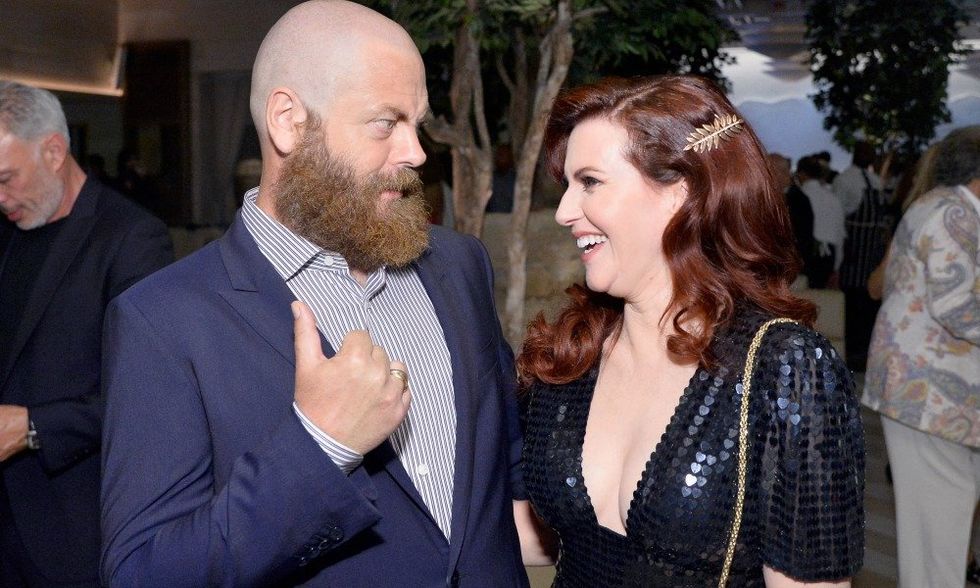 Hollywood seems to be filled with couples that have relationships that expire before the milk in your fridge does. It seems like you hear about a new "It" couple getting together, and then, inevitably, breaking up. Remember Pete Davidson and Ariana Grande? Their whirlwind romance had us all believing in true love again, and when they ended their engagement after just a few months together, the world seemed to make a little bit less sense. How could two people with such profound love of Harry Potter not make it? Is there even hope for the rest of us?

But luckily, true love does exist in Hollywood, and I have just the couple to illustrate that fact. Here are some of the best reasons why Megan Mullally and Nick Offerman are the best celebrity couple ever. And no, they're not just a real-life version of Ron and Tammy. (Although they're not that far off).

In case you somehow haven't heard, Megan Mullally and Nick Offerman are married.

I'm not sure how you wouldn't be aware of this situation, but you never know. Maybe you've been living in a windowless shack with no WiFi connection for the past ten years. No judgement here.

This power couple has been together for 19 years.

Mullally is best known for her star-making role as Karen on Will & Grace, while Offerman will forever be known by his iconic portrayal of Ron Swanson on Parks and Recreation.

The duo first met in Chicago during a readthrough for play "The Berlin Circle" in 2000.

In an interview with Vulture, the couple described their instant connection. "After rehearsal one night we went and drove around," said Offerman. “I put my hand on hers on the gearshift in the middle and that was very electric."

“Opening night, somebody saw us making out and then the cat was out of the bag. And then we were dating," said Mullally.

The couple got married in 2003, and their relationship has been the epitome of #couplesgoals ever since. Here are some of the reasons why I may or may not be slightly obsessed with this dynamic duo.

They're insanely stylish, as demonstrated by this epic photo.

The teased-up hair! The shoes! The poses! Show me a more stylish couple. I dare you.

And they're clearly not afraid of an eye-catching pattern.

While the two have kept their wedding photos tightly under wraps, I can't imagine them looking any better on their big day than they do in this picture.

Another reason they're the best? They're hilarious.

And they obviously have no problem being goofy. Isn't it refreshing to see a Hollywood couple that doesn't take itself too seriously?

Hilarity inevitably happens whenever these two are together.

Like in this photoshoot for their book "The Greatest Love Story Ever Told: An Oral History", which was released in October of 2018 and topped the New York Times bestseller list.

Or the countless times Megan pokes fun at Nick on social media.

She captioned this video "me getting Nick ready for the woodshop this morning". Honestly, I would pay a lot of money for the opportunity to brush Nick's beard just like this... Wait, is that weird?

Seriously, these two take dressing up to a whole new level.

"Suck it, Nick!" said Mullally in the caption of this photo. Doesn't a game of bowling with these two sound like the best Saturday night EVER??

Also, their selfies are on point.

This snap was taken while in Oklahoma during their book tour. Offerman is giving off major Ron Swanson vibes in this pic, minus the huge beard and bald head.

While it may seem hard to believe, Nick is actually 12 years younger than Megan.

Megan was surprised, too, when she first found out how old the then-29-year-old Offerman was. “Yeah—I thought he looked old!" she said.

"YOU MOTHERFUCKER. And I almost ran my car off the road." Mullally has also said that Offerman would divorce her the second she got Botox, so clearly the age difference doesn't bother him.

They frequently appear on each other's shows.

Who can forget Megan's recurring role as Ron's insanely volatile ex-wife Tammy on Parks and Recreation? Was I the only one who was secretly pulling for these two to finally end up together?

Offerman even appeared in two episodes of "Will & Grace"!

Most recently, he played Jackson Boudreaux, a celebrity chef that both Will and Grace end up dating at the same time. Previously, Nick played a plumber who Karen makes out with in the fourth-season episode titled "Movable Feast".

Oh, and did I mention they're avid puzzlers?

Or this magical moment.

The real question is, where do I buy a puzzle of this photo of Megan Mullally and Nick Offerman copying the pose of the couple on the puzzle they just finished?

The couple has been sharing their finished puzzles on Twitter since August of 2015.

So maybe they've found the secret to a long-lasting relationship. Instead of all those romantic dinners and horse-drawn carriage rides, just sit down with your significant other and puzzle together. Hey, if it works for Megan and Nick, it's worth a try!

They're totally obsessed with their dogs.

Here's Nick promoting their book with the couple's furry (and fashionable) friend. Not many people, let alone dogs, could pull off a turtleneck like that.

Here's the dynamic duo with their canine counterparts.

And yes, they're posing with yet another completed puzzle. If this article doesn't give you a sudden urge to do a jigsaw puzzle, nothing will.

They're very open about their sex life.

VERY open, in fact. They've talked about their love of outdoor escapades on Conan O'Brien's show, and Megan even claims their active sex life is the reason she's able to stay so thin. We're all so happy for you guys...

"I'd say you look pretty gol dang gorgeous like every other day and whoever gets to get you outta that jacket is one lucky donkey," commented Offerman. Swoon!

After Megan talked about the pilot episode of Will & Grace, Nick responded with just two words: "On board". These two are KILLING it!

Offerman calls Mullally his "hero and bride" in a touching birthday tribute post. And of course ended it with a hilarious key party joke.

But most of all, their obvious love for one another is what makes them such an awesome pair.

"He tells me every minute that I’m the most beautiful, sexy, incredible woman in the world, which couldn’t possibly be true, but it’s nice. He always prefers me without makeup, you know," said Mullally in an interview with Hello Giggles.

In fact, Offerman is so nuts about his wife's natural looks that his favorite outfit of hers may surprise you:

A flannel shirt and jeans. Seriously, these two are beyond adorable. In fact, it's almost getting sickening how adorable they are.

So what's their secret to a happy marriage?

“Any marriage is like a garden," Offerman said. “You have to pull the weeds and fertilize the soil if you want to enjoy the delicious tomatoes."' I think we can all assume what "tomatoes" Nick is referring to here.

Have I thoroughly convined you yet that Nick and Megan are the best couple in Hollywood?

Or, if not the best, at least the most fun to hang out with. They really should start renting themselves out for parties.