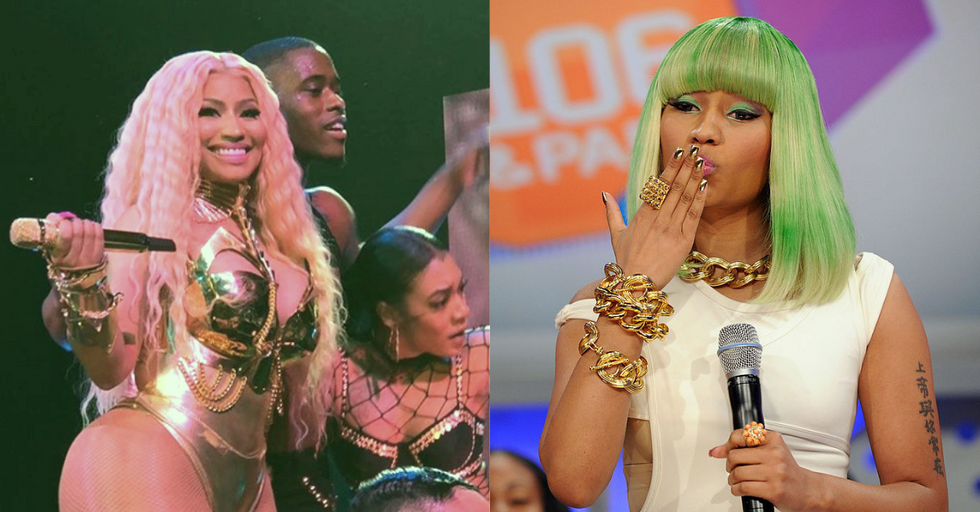 The announcement has left her fans reeling. Many are in a state of utter shock and disbelief.

Could this have anything to do with the fact that Minaj has been dating musician Kenneth "Zoo" Petty since December of 2018 and recently changed her Twitter name to "Mrs. Petty?" Is marriage in the future for Ms. Minaj? Kids? Stay tuned to find out...

Some of you may be reading this and saying, "uhh who?" In that case, we have you covered. Let's take a little walk down memory lane. Come with me on a journey to the past. All the way back to 2009.

But scandal never traveled far behind her. In October of that year, a video leaked that showed Minaj in a fight with songstress Mariah Carey during the American Idol auditions. According to sources, Carey accused Minaj of saying, "If I had a gun, I would shoot that b*tch," but Minaj denied saying it. Carey doubled down, saying that Minaj had created an "unsafe work environment" and called in her security team for backup. Then, Carey claimed Minaj didn't have a number 1 song on the Billboard Hot 100 during a live broadcast, and that, apparently, was Minaj's limit. Soon after, both women left the show for good.

In 2013, Minaj made her first foray into acting by co-starring in a movie with Cameron Diaz.

It debuted at number 2 on the Billboard 200 but the album was plagued by scandal, the biggest of which surrounded the music video for her song "Only." According to the Anti Defamation League, the video contained all kinds of Nazi-related imagery that was insensitive for Holocaust survivors. Yikes.

The movie got a hot 90% on Rotten Tomatoes, even receiving acclaim from film critics. She was even nominated for a Teen Choice Awar for her work on the film. Listen, it's not an Oscar but it will do.

In 2017, Minaj was featured on Jason (I dare you not to sing his name out loud) Derulo's single, "Swalla."

The song became a monster hit, topping the charts at home and internationally. The next month, Minaj officially became a model after signing with prestigious modeling agency, Wilhelmina. Yes, girl. Get that money!

In March, she pulled a boss move...

Minaj released three of her singles all at once and subsequently broke the record for most Billboard Hot 100 entries for a female artist in history. The record was previously held by Aretha Franklin!

Everything seemed to be going well. Minaj announced her fifth album on Jimmy Fallon, telling him "You're the first to find out... of course there's a new album." She released a single called "Megatron." Things were fine! They were fine, I tell you!

Today, in one earth-shattering tweet, Minaj announced that she would be retiring from music entirely. Wait, what? Yeah. I know. We are just as shocked as you are.

Could it be that she's finally settled into life with her man, Kenneth Petty? This video of them together seems pretty darn cozy.

Will this stick, or will she blow our minds with a forthcoming album? Only time will tell!

Haven't gotten your fill of music news today? Keep reading to find out who was charged in connection with Mac Miller's death.

When musician, Mac Miller, passed away almost a year ago to the day aged just twenty-six, the world was shaken. The talented star was also known for being one of the most kind-hearted men in the sometimes-controversial hip hop scene. His death was ruled an accidental overdose, after being found unresponsive by a friend in his San Fernando Valley home. Miller had long been open about his recreational drug use, although some found it odd that the star had ODed out of the blue. But now developments in the case reveal that the oxycodone that he had taken may have been laced with the far more dangerous fentanyl - and the supplier of the drugs has now been charged in relation to Miller's death.