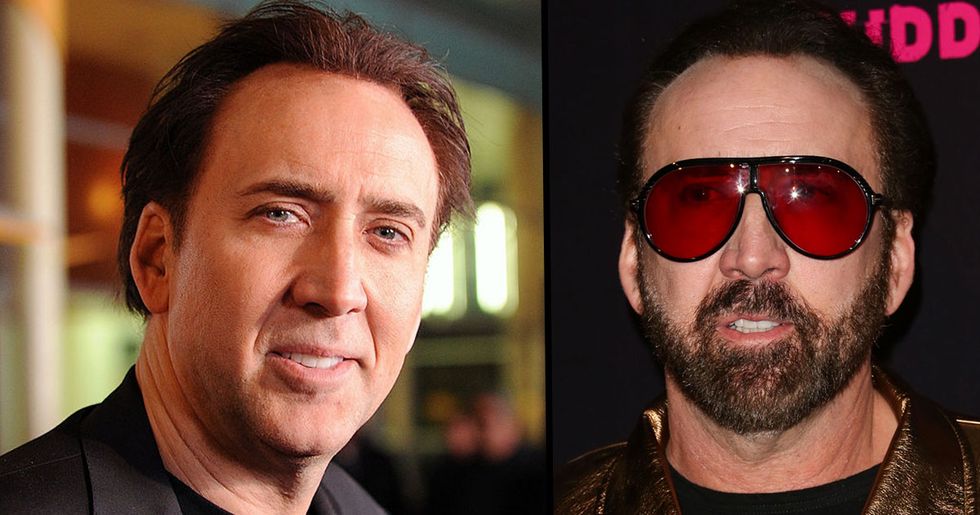 With 3 failed marriages already under his belt, Nicolas Cage is going strong towards a world record of "most divorces."

Last week, Cage got married in Las Vegas to his much younger girlfriend, Erika Koike. They also got divorced...

TMZ has got hold of a video showing the couple arguing while in line to get a marriage license. Witnesses report seeing Cage "most likely drunk" and shouting about how Erika was coming after his money.

However, in the video, it's clear that Erika was actually the voice of reason at the time.

Facebook users and Cage's fans weren't surprised to see his 4th marriage go down the drain. Instead, they made jokes about how his past movies must have had too much influence on him.

A few others also pointed out that Cage's situation only proves that people no longer have any respect for marital commitment.

According to Daily Mail, he has been married to actresses Alice Kim, Patricia Arquette, and Elvis Presley’s only daughter singer Lisa Marie Presley.

His marriage to Patricia Arquette lasted for six years, from 1995 until 2001.

In 2002, he tied the knot with Lisa Marie but their marriage only lasted three months.

His relationship with Alice Kim was the most serious; they stayed together for twelve years, from 2004 to 2016.

Their son, Kal-El, was born in 2005. Cage also has a son, Weston, from the time he dated actress Christina Fulton.

He's now been in a relationship with Erika Koike for nearly a year.

The couple were first seen together in April 2018, while Cage was filming in Puerto Rico.

Afterwards, they were spotted together a few more times.

Apart from having dinner in Beverly Hills last May, they've kept out of the spotlight pretty well.

Little is known about Erika Koike.

Except, Daily Mail says, that she has one credit on IMDb as a makeup artist.  She's thirty-four years old.

On Thursday, TMZ reported that the couple had got married... and divorced four days later.

TMZ managed to get hold of the court records and a video, showing Cage and Koike making a scene in Las Vegas.

The pair got married on Saturday.

It was on the same day that Cage applied for a marriage license.

It seemed impulsive at the time... and it was.

On Wednesday, Cage went back to court to ask for an annulment of their marriage.

But TMZ knew their relationship wasn't stable a few days before the divorce news broke out.

They had found a video of the couple at the courthouse on their "wedding" day.

In it, Cage was seen clearly already after having a few drinks at a bar.

He was yelling at Koike, telling the random bystanders that she was after his money.

Supposedly, this was when they tried to obtain a marriage license.

A drunk and famous couple in Vegas, trying to get married, isn't anything new.

What's a little bit more surprising is that they were drunk at eleven o'clock in the morning!

An eyewitness told Daily Mail that Cage seemed to be "very out of it" and "most likely drunk."

They said that, at one point, he even raised his voice.

He started shouting about "how Koike's 'boyfriend' is a drug dealer" and that "he isn't doing it," most likely referring to going through with the wedding.

In the video, you can see that Koike is trying to stay calm, telling him, "I never asked you to do this."

Then Cage smiles and gently nudges her towards the hallway, saying, "Come on, let's go."

"They started by filling the application in one of the machines," the source said.

"The woman only kept saying 'Baby, I am not asking you to do this."

Daily Mail says, the pair were making a lot of noise and were taken to a private room to complete their application.

Later, they were seen leaving the courthouse with papers.

Considering how his previous marriages ended, people, even his own fans, weren’t all that surprised. Instead, they joked about how ridiculously short his 4th marriage was.

Candice Butchino noticed that "he was accusing her of cheating and using him for money IN LINE TO GET THEIR MARRIAGE LICENSE," adding, "Did we honestly think this was going to work???"

Monika MK: "Is this guy literally on crack when he gets married all the time...??♀️"

MJ Finzz: "Who could have seen this coming??? Meanwhile in yesterday's news: 'She is going to take all my money!' 'Drunk' Nicolas Cage makes a scene at Las Vegas courthouse while applying for a marriage license."

Olga Carr suggested, referring to the insane number of failed Las Vegas marriages, "The wedding chapels in Vegas should just be one long hallway. Walk in, get married, keep walking to the end of the hallway and file for divorce."

She then added, "I recently heard that of all the celebrity couples married in Vegas the only one still married is Jon Bon Jovi and his wife. Who knows if that's true but it can't be that far from the truth."

Miguel Tristan: "Gone in 60 seconds, the reality show! Coming Fall 2019! Stay tuned!" I would watch that.

Brandy Dougan: "Well he did win an Oscar for Leaving Las Vegas. That may have been a precursor for things to come..."

Amber Franks-Becerra: "Do they have a real househusbands show? Cause he needs to be on it..." We hope that some TV producer is taking notes of these incredible ideas.

Tara Scott wrote, sarcastically, "Nooooo they looked perfect for each other ?"

Pat Jeffries addressed Nicolas Cage directly, "Stop getting married....you need to be put on time out."

Corey R. Johnson said, "Gotta keep up with J Lo somehow," referring to her three failed marriages and one engagement to Ben Affleck, according to People.

Sherry Le Moine: "My first thought was Ross and Rachel."

Tyriq Williams thought that his marriage ended most likely because "he forces her to watch Ghost Rider every night."

Kelly Michael: "Nicolas Cage motto is on to the next one ?"

Habiel Ismail wrote, "When she don’t want to help you find the Declaration of Independence," referring to Cage's famous movie.

Others joked about the age difference between Nicolas and Erika.

Rachelle Brutus JB: "This is what happens when you marry your child. That girl could be his daughter! #oldtiredAss she probably was too much for him. ???"

Michelle Joseph: "He's too old for this nonsense."

Tracey Simpson: "He is way too old for this bulls#%. He needs to remain single and date. Marriage is not for him."

Meanwhile, others emphasized how little tying the knot means to people today.

Lana Sampert wrote, "Sanctity of marriage is gone. I wish people would quit getting married just to have a wedding. Not all people. Just the people who are married for days and go....oh well. Divorce." Windell Pete agreed, "People play with marriage too much."