After much build up, everything came to a head last week. | 22 Words 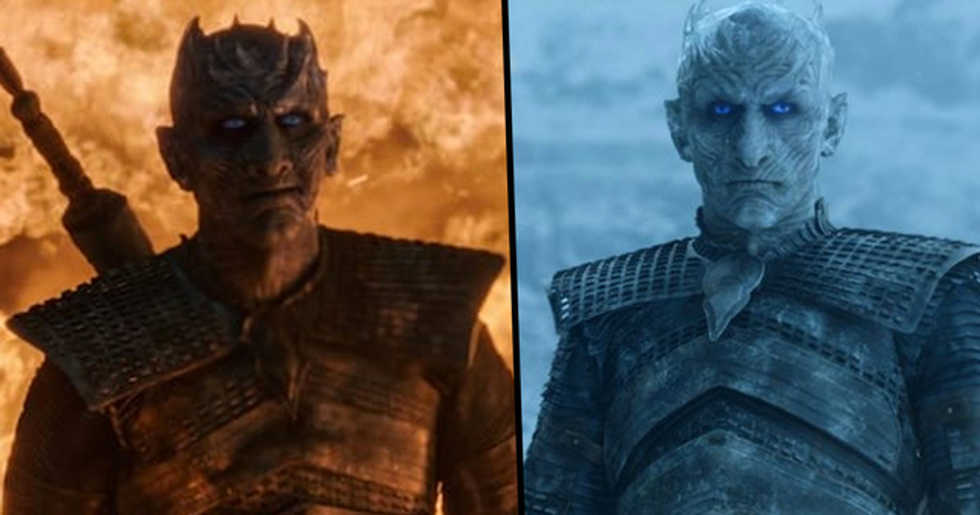 With the miracles of special effects makeup and CGI, more and more often, actors are seemingly unrecognizable from the parts that they play. Think about It, the 2017 horror movie which had people falling in love with the terrifying clown villain, simply because he was played by total hottie Bill Skarsgard. The internet is no stranger to falling in love with unlikely figures - and this latest revelation has been no different.

As Game of Thrones approaches its end, the incredibly frightening Night King enjoyed a starring role in this week's episode (spoilers ahead!). As the leader of an evil army of death called the White Walkers, he descended on Winterfell and tried to take down the living army. Unfortunately for him, Arya Stark managed to ensure that he failed. But the actor who plays the villain has had another victory of sorts. The internet has seen his face, and it's safe to say they're impressed.

We're all pretty used to the magic of makeup.

It's pretty incredible that with careful application of a few products, you can essentially look like a completely different person.

The truly skilled can produce some amazing results.

Using a steady hand (and a bucketload of talent) some MUAs can trick the eyes and create living, breathing optical illusions.

And that's just in real life.

When it comes to the screen, special effects teams can truly perform some visual magic, making us see things that we never thought we'd be able to witness.

It's all pretty spectacular.

But there's no feeling that quite compares to seeing the behind the scenes footage of what people look like pre-makeup.

And this is particularly true when it comes to actors.

In 2017, Bill Skarsgard starred in terrifically creepy horror remake It, as the titular evil clown.

But when we saw him without makeup...

Well, we couldn't quite believe that this handsome, chiselled actor was behind the creature that we were all so frightened of!

In fact, people had quite a strong reaction.

For a while, it seemed almost as though the entire internet had a collective crush on Skarsgard, in spite of his initial creepy facade.

And we're starting to notice a trend.

The latest in the list of unmasked actors whom the internet is thirsty for? Well, of course it would be someone from Game of Thrones!

The show is currently in its eighth and final season.

Which means that the final episodes are going to be incredibly epic - and last week's was no exception.

For a long time, the show has survived under threat.

An army of the dead from north of the Wall have been threatening to invade Westeros and destroy each of the seven kingdoms.

There are two main types of fighter.

The Wights are the zombified creatures who attack anything living mindlessly and enthusiastically. But what are even more terrifying are the White Walkers.

These creatures are like something out of a nightmare.

They appear to have otherworldly powers and seem almost impossible to defeat in battle.

At the end of every battle, the White Walkers have the power to raise the dead, turning them into Wights and adding them to their army.

The White Walkers have one particular leader.

The Night King is one of the best villains ever created for TV. We know very little about him - which is perhaps why he's so frightening.

After much build up, everything came to a head last week.

The White Walkers and the army of the dead marched on Winterfell, making for a truly epic showdown.

The Night King was (obviously) at the helm.

It was the first time that many of the main characters had ever seen him in real life - and their reactions really said it all.

But in spite of his prowess, he met his untimely end.

The Night King's fighting skills were no match for trained assassin (and teenage girl), Arya Stark.

In the end, it was Arya who managed to kill the Night King.

After she stabbed him, she effectively ended the threat of the White Walkers, saving all of Westeros.

Which means that we aren't likely to see him again.

In many ways, this is a good thing - it's better that there's a human victor of the game of thrones, as opposed to a terrifying zombie!

Or so we thought.

Because now the internet has discovered what the Night King really looks like under all that makeup - and it's pretty surprising.

Eagle-eyed fans may already have had an idea.

We saw a glimpse into the Night King's origin story in season six, when the Children turned an unsuspecting man into a terrifying nightmare.

But many had forgotten the man behind the Night King.

Until now. The internet has discovered the Instagram of the Serbian-stuntman-turned-actor who brought the villain to life.

And everyone had quite a similar reaction.

Is it just us, or is the Night King sort of ... hot? On a show with so much eye candy, it's not surprising that the man covered in scary prosthetics has been overlooked - until now.

This image is surely what the internet's dreams are made of? In fact, many are claiming that they're feeling pretty envious of that horse...

The actor in question is named Vladimir Furdik.

And, honestly, he wouldn't be out of place in leading man territory - which makes his role as the villain all the more surprising.

The talented actor is forty-eight years old and has played the part of Game of Thrones's Night King since the show's sixth season.

People are feeling thirsty for the Night King.

But even if you aren't, his Instagram is well worth a follow. It's filled with brilliant behind the scenes photos, like this one with actor, Kristofer Hivju, who played Tormund.

He's also shared an alternate ending to the epic series.

This shot of the Night King sitting on the Iron Throne should be enough to strike fear into the heart of any Game of Thrones fan.

He also shared this cute snap.

It seems that when the cameras are off, there's no bad blood between nemeses, Arya Stark (played by Maisie Williams) and the Night King.

In fact, it seems like the actor couldn't be further removed from his evil character.

In this cute picture, Furdick wishes "all the people in the world the best." Not a very Night King statement - but appreciated nonetheless. Game of Thrones wouldn't have been the same without him!