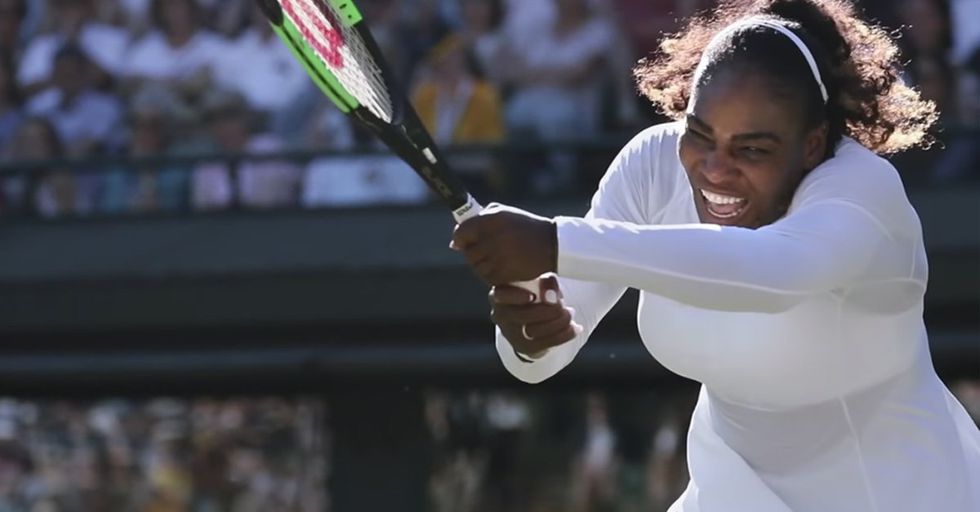 Last night's Oscars are already being dissected for the highs and the lows, but what might surprise you is that the highest high didn't even come during the awards themselves. The theme throughout the night was one of the minorities and women getting their dues. Black Panther boasted two African-American women making history with wins in two categories that had never seen African-American female winners before. Spike Lee finally won an Oscar. A film about menstruation won Best Short Documentary. But none of that can compare with the tear-jerking power of a simple Nike ad.

Powerfully entitled "Dream Crazier," the commercial is narrated by Serena Williams and tapped into the zeitgeist of woman power. It's already been viewed over 3.5 million times (that's in less than 24 hours). What was it that inspired so much emotion? Well, you'll have to watch the commercial to find out. But here's a sneak peek: women breaking barriers.

Check out the ad at the bottom of the page, but first... let's break down why it was so important.

Ok, let's break that down.

If you're like me, this commercial gave you tingles down your spine. But the commercial is more than just a rallying cry for powerful women. Let's talk about how it does what it does.

If there is someone in this world who is more emblematic of a strong and successful woman, I have no idea who it is. Seriously, come up with someone. I'll wait.

But she doesn't just talk about success; she talks about struggle.

“When we stand for something, we’re unhinged," Williams says. “When we’re too good, there’s something wrong with us. And if we get angry, we’re hysterical, irrational, or just being crazy."

But we are more than our oppression.

The beauty of the ad is that it takes us on a journey.

Women of all kinds can see themselves mirrored within the pain of failure, and the power of success.

But what the ad truly gets right is diversity.

We see women of every color succeeding.

We see diversity in the women presented.

A woman in hijab breaking boundaries is exactly what I want in my life.

It's diversity that challenges the limits of the human body.

No age is excluded.

We can empower women and girls at every stage of life.

And no one will be left behind because of the way they look.

It turns out that fitness is not limited to one body type.

Seeing dozens of beautiful, capable women setting and achieving their goals reminds me that I am strong. I am capable of anything. I will not be put in my place.

If you can walk away from a message of empowerment like that without feeling tingles?

I'm pretty sure you basically don't possess a heart.

People could not contain their excitement.

Female athletes and coaches resonated with the ad.

It's no wonder why... iI recognizes what they have had to push past in order to succeed.

Even the creators who made the movie on women's representation are here for it.

It takes a lot to dismantle stereotypes in a minute and a half, which is why the Twitter over at Miss Representation was happy to support the ad.

Thank God someone is over here bawling with me.

Nike really has me crying every time I see this commercial. Because I remember almost all of these moments. I’ll sa… https://t.co/G7YyDkX0tU
— Shaina Wiel (@Shaina Wiel)1551066688.0

For real though I'm a mess.

At least I know Nike supports me when I'm emotional.

Some people saw the ad as a call to push forward.

Others found that it reminded them of their loved ones.

My wife @heathervulin has been dreaming crazy since I met her, probably since she was a kid. It’s what makes her gr… https://t.co/izLbJKBio4
— Kevin Vulin (@Kevin Vulin)1551100015.0

And others were just impressed by Nike's motivation.

It takes a lot to turn negativity into motivation. That's what makes the ad so different.

Just look at the final two slides of the ad.

It's only crazy until you do it. Now that's inspiring.

And some marketing genius connected it directly to Nike.

Oh, dang! Until you do it becomes just do it and this commercial just destroyed my brain!

Without further ado, here's the ad:

I dare you not to cry. Actually please do cry, I need to feel better about how teary I got.

But some folks were not too excited about Nike's move.

To be fair, he has a point. It's tough to champion women's rights when you underpay them.

Is the ad's message undercut by Nike's practices?

Or are you still 100% on board for dream crazy?

I think we can all agree that the moments in the ad are still powerful, no matter who has presented them.

And if I'm honest?

If they think your dreams are crazy, show them what crazy dreams can do. #justdoit https://t.co/m5xMlC3vhc
— Serena Williams (@Serena Williams)1551028418.0

Whatever my girl Serena says, I'm probably on board with.

What will you do to #dreamcrazy this year?