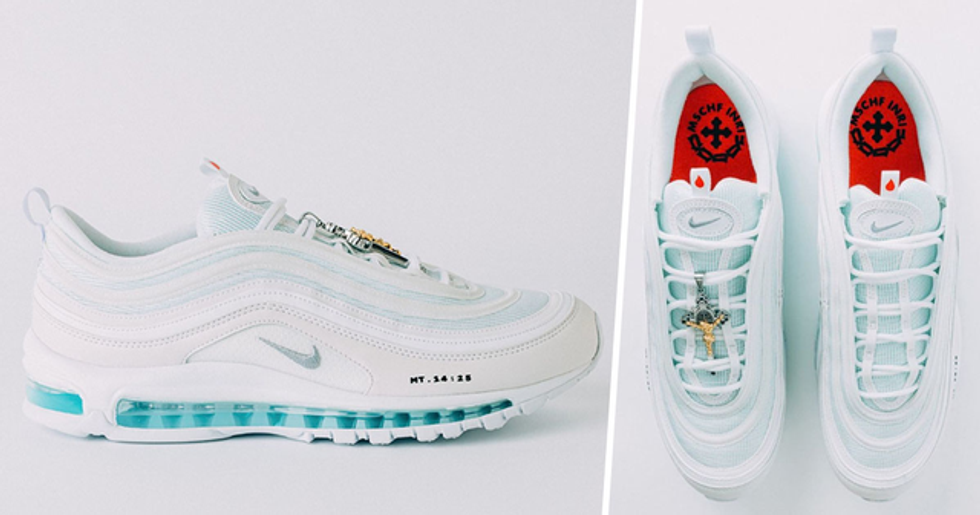 Nike 'Jesus Shoes' Cost $3,000 and Are Filled With Holy Water

Sneakerheads have been beaten at their own game this month, with perhaps the most absurd collaboration the world (and heaven) has ever seen. Brooklyn-based shoe brand MSCHF took a swipe at how far collab culture has gotten, by creating a Nike crossover with the man upstairs. Yep, that's right. Jesus-themed sneakers.

These shoes are oddly authentic, complete with crucifix lace charm and upper construction of frankincense wool. But the cherry on top has to be the shoe's soles, which are filled with holy water. And the price is certainly no joke - they're currently retailing at $3,000. Even weirder? The shoes have already sold out online.

Let's face it, the world of sneakers is kind of weird.

For many out there, collecting every pair of weird and wonderful sneakers isn't just a hobby - it's a lifestyle.

Sneakers can be an expensive vice - and the obsession with having the most well-rounded and rarity-filled collection can really take over someone's life.

And to some, things have gone too far.

The absurdity of collaboration culture is something many sneakerheads find is causing sneaker fatigue.

And there's one collab which really pushed some over the edge.

The Arizona Iced Tea and Adidas crossover got many questioning whether we really need these kinds of novelty sneakers in our lives.

But one brand had a clever response to the overabundance of collabs.

Brooklyn-based band MSCHF decided the best way to take down collab culture was from the inside - with one of the oddest we've ever seen.

The brand searched for the oddest collab they could think of.

And landed on none other than Jesus Christ, the son of God.

"We were wondering, what would a collab with Jesus Christ look like?"

So they went with the obvious choice - adding a crucifix embellishment to the shoe's laces. But that's not all.

"As a Jew myself, the only thing I knew was that he walked on water."

So the brand chose to fill up the sneaker's soles with water actually blessed by a Christian priest.

The shoes were sort of intended as a joke.

“We thought of that Arizona Iced Tea and Adidas collab, where they were selling shoes that (advertised) a beverage company that sells iced tea at bodegas," head of commerce Daniel Greenberg told The New York Post. "So we wanted to make a statement about how absurd collab culture has gotten."

But it seems the joke has paid off.

The shoes retailed for $3,000, and sold out almost immediately. With a limited run of twenty-four pairs, MSCH has earned $72,000.

To make things even weirder?

The shoes aren't even officially a collaboration with Nike!

And they then created the customization on their own.

Here's the shoe in all its glory.

They're not actually too bad, right? Although for $3,000, we'd probably come up with a better way to spend.

Here's that holy water close up.

The water is from the River Jordan and has been blessed by a priest. On top of that, the upper textile is created from frankincense.

If you're feeling sad you missed out, MSCHF has promised a restock soon. Better get saving! Curious about some more weird shoe customization? Scroll on for a gothic take on the classic Croc sandal.
20%