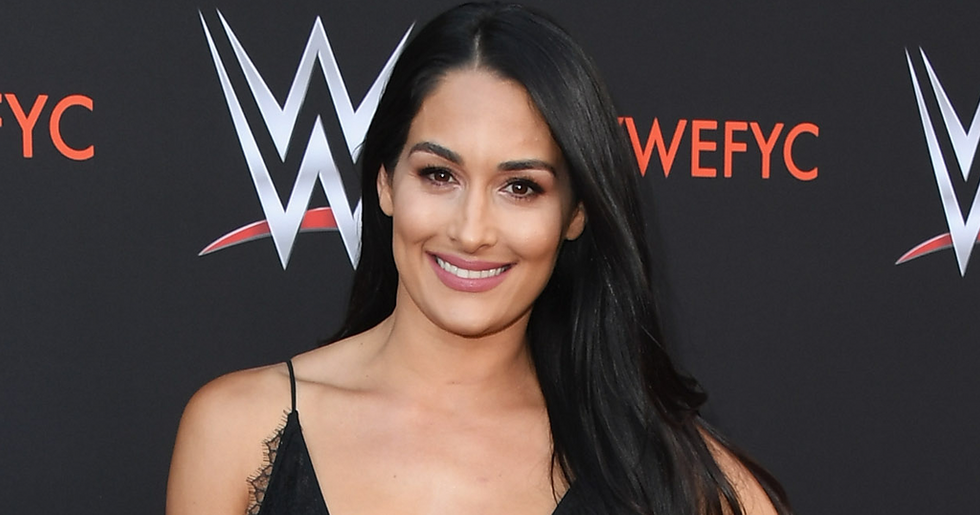 Nikki Bella has just shared the first photo of baby Matteo after turning one month old, and we can't get enough of his adorable face...

And the twins come from sporting backgrounds - having played soccer in their youth. Although, it wouldn't be soccer that they ended up pursuing.

In search of modeling and acting opportunities, Nikki and Brie relocated to LA...

Their stint on the show spurred a more lucrative on-screen career...

And shortly after their appearance on the reality show, the twins were hired to be the World Cup Twins for Budweiser and were subsequently photographed holding the World Cup trophy.

They were a huge success, to say the least.

But wrestling wasn't their only source of income...

And it seems that the reality star lifestyle was much more suited to the twins than the wrestling one...

Because in March 2019, both Bellas announced on the show that they would be retiring from wrestling. And then, earlier this year...

The twins both announced that they were pregnant... at the same time.

For Brie, the road to pregnancy wasn't an easy one...

“My husband and I were trying for 7 or 8 months, but then I felt in my heart it was a sign from God, like, ‘You guys are good with one,’ so we stopped trying," she explained. "When we were in France meeting Artem’s family, I felt a little off. I was irritated and uncomfortable in my body. When we got home, I took a test two days before Thanksgiving, and when I saw the positive sign, I was like, ‘Oh, s—!’"

Nikki, on the other hand, explained that she and Artem weren't actually trying for a baby.

“I was in yoga, and I kept getting this feeling that you need to take a pregnancy test, but I wasn’t even late yet. And so I’m like, ‘Why do I keep having this feeling? Am I getting twin vibes from her? Because she just told me she’s pregnant?’"

But earlier this month...

Brie Bella finally gave birth and welcomed her second child into the world with husband, Daniel Bryan. The couple waited throughout the entire pregnancy before knowing the child's gender and now they finally know - it's a baby boy!

Nikki joined the club welcoming her son, Matteo Artemovich Chigvintsev, into the world. She too confirmed the news on Instagram. "7/31/2020 Our baby boy is here and we couldn't be HAPPIER and more in LOVE! Everyone is safe and healthy."

The twins seem to be radiating with happiness since their bundles of joy arrived...

And now after Matteo has turned one month old, Nikki Bella celebrated by posting a pic of her baby boy on Instagram...

She posted the picture on Monday, marking one whole month since his birth, and he's rocking the wet hairdo...

“Our Matteo is a month old today 💙 @theartemc," she captioned the post.

And Nikki's followers were the first to respond saying how much he looks like Artem.

This might be one of the first up-close pics we've seen of Matteo, but Nikki has shared plenty more of their little family...

He can be seen sleeping peacefully in Artem's arms, and quite honestly it's the most adorable thing we've ever seen.

Nikki has also shared a pic of Artem just after he was born, although this time we get a better look at his cute little features.

We can't wait to see some more pics! Keep scrolling for more on Nikki Bella and see why fans are praising her postpartum body...