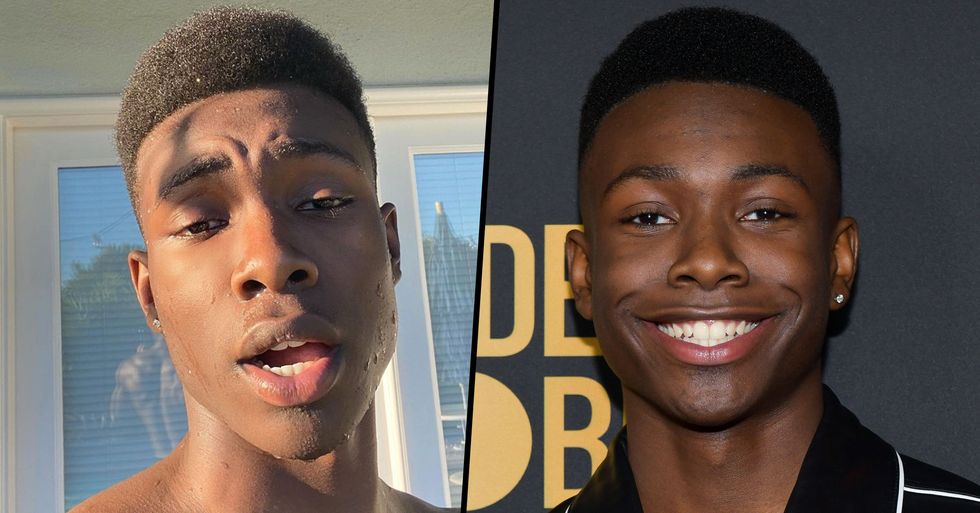 Niles Fitch is officially Disney's first-ever Black live-action prince. This announcement has been long-anticipated and who better to take on such an important role than Fitch himself?

Well, recently, he discussed exactly what an opportunity like this means to him and his comments have touched the hearts of global audiences.

Read on to find out exactly what he said...

Niles Fitch taking on the role of a prince in Disney's live-action has been a milestone for many.

The actor himself was shocked and grateful for the crucial role and revealed the importance of taking on such a public figure.

This is because Disney has always been under fire for its lack of diversity.

It's no secret that the company giant has been involved in multiple scandals, but this one has probably lost them the most fans.

We have always been subjected to the same image...

Most Disney characters have always been white, no matter if they are male or female. It was only in 2009, that we got our first-ever Black Disney princess, Tiana.

And since that foot in the door, we have slowly seen a more varied line-up...

Disney characters are now coming in all different colors and ethnicities and though we're not completely there yet, it's good to see the difference.

Last year, we even got a Black Ariel.

Halle Bailey took us on a journey into the deep blue as she became our modern-day Ariel.

And a year later, we're pleased to announce that we got our first-ever Black live-action prince.

While some people have claimed that Chadwick Boseman was, in fact, the first Black prince...

Technically he is ruled under the Marvel label and even though Disney now owns Marvel, both of the companies stand as separate entities.

This show tells the story of royals who are gifted with special powers that help them protect the world.

In order to do their job, they are taken to a special school where they are taught how to harness their powers.

Prince Tuma is described as "charming."

As per Disney+, his biography states that his "super-human ability is vital to the team's success, but his self-centered nature needs a lesson in empathy."

Fitch made the announcement via Twitter earlier this year.

"Welcome Disney’s first Black prince," he wrote and of course, it excited all of his fans.

We knew he would be perfect for the role right when it was announced.

His fans are very proud.

Better late than never at all...

We have no choice but to stan!

We have previously seen his skills being put to the test when he starred in This Is Us.

In the popular series, he plays the teenage version of the character Randall Pearson. The role has seen him win awards and many new fans.

But now he's ready to take on a new challenge.

And it involves breaking down these representation barriers.

Speaking to multiple outlets, the actor explained just how important the role is to him and the entire Black community.

He told Hollywood Life this: "It's not even the fact that I'm doing it, but it's more the fact that people are going to be able to see that on the big screen," he said. "When I think about my experiences, the first time I was really able to see that was Black Panther. I remember how it positively affected me, and I love Chadwick [Boseman]."

"To know that I'm in a position to ... be that representation for a young Black boy that may or may not be able to see himself on television all the time, or on the big screen all the time ... that means the world to me."

He also spoke to Popsugar, who described Fitch as unique.

"I think that's what's so great about my character is he's normal. There's not some crazy bad thing about him. He's good-spirited. He has a good heart. I feel like for people to be able to see that representation on TV — he is royalty and he is a superhero — you don't see that." He told the outlet.

He also contrasted this with how Black people are already portrayed in the media.

"I just can't wait to see the impact that it has on boys that look like me, being able to see themselves on TV, because we're more than just what the media shows."

"...And I feel like if we were shown more on TV in positive roles, or just roles in general, that wouldn't have to be said. We wouldn't have to say our lives matter. It would be a known thing."

Get to know some of the characters of Secret Society of Second-Born Royals here:

Keep scrolling to see a list of more impactful shows that you have to watch right now...