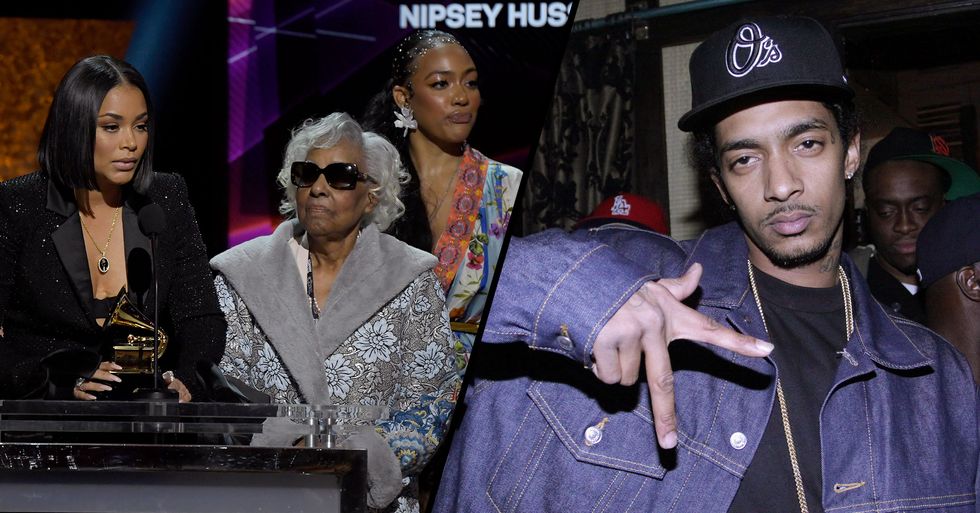 The world looked on in horror last year, as talented rapper and activist Nipsey Hussle was fatally shot outside his Marathon Clothing store in Los Angeles. Hussle was seen as having so much potential that his loss was a true tragedy.

And last night at the Grammy's, Hussle was posthumously honored with his first-ever win. His family took to the stage to accept his award and to ensure his message lives on.

Nipsey Hussle was a hugely talented musician and an important activist.

He was born in 1985 in Crenshaw, Los Angeles, and had a turbulent childhood.

He joined the Rollin 60s Neighborhood Crips, a path that could have led to a dangerous and frightening lifestyle.

But Hussle turned his life around.

After a trip at age 19 to his father's home country of Eritrea, Hussle was inspired by the community he saw there, and decided he wanted to foster the same back home.

His first mixtape, Slauson Boy Volume 1, was released at the end of 2005.

From there, Hussle's career went from strength to strength.

His debut studio album, Victory Lap, was released in 2018 and nominated for the Grammy Award for Best Rap Album that same year.

But music wasn't Hussle's only interest.

He was a true entrepreneur, from his first business shining shoes as a schoolboy to his Marathon Clothing brand.

And he wasn't just interested in raising himself up.

Hussle was a community activist, dedicated to the cause of helping other young black men achieve a better life for themselves.

Hussle had also achieved success in his personal life.

But Hussle's story had a tragic ending.

On March 31st, 2019, he was fatally shot outside his clothing store in South LA.

Hussle was shot at least 10 times.

2 other victims were injured in the attack, and Hussle was pronounced dead at 3:55. He was just 35 years old.

The motive of the murder is not yet fully known, with police suspecting it was a personal vendetta.

The loss hit the community hard.

A memorial service at the Staples Center was held on April 11th with tickets free of charge.

Thank you to @BarackObama for sending this letter for me to read celebrating @NipseyHussle’s life & legacy. 🏁 https://t.co/qwEjjb6O9d
— Karen Civil (@Karen Civil)1555006694.0

He offered an open letter to the community following the tragedy that befell Hussle.

His legacy has certainly lived on.

And nowhere was this more apparent than at last night's 62nd Annual Grammy Awards.

London walked the red carpet in his honor.

And looked absolutely stunning while doing it.

Other members of Hussle's family were also in attendance.

Hussle's "Rocks in the Middle" won the award for Best Rap Performance.

This marks the late artist's first-ever Grammy win - and, adorably, his family accepted the award on his behalf.

London really did him proud.

"Nip did it not just for the awards, but for the people. God allowed him to use this music to speak his truth, give his wisdom and something we will forever be able to live with."

Hussle also won the award for the Best Rap/Sung Performance award for "Higher" with DJ Khaled and John Legend.

Grammys executive producer Ken Ehrlich perhaps put it best. "There is no denying the influence he had and his legacy will be felt for generations to come."