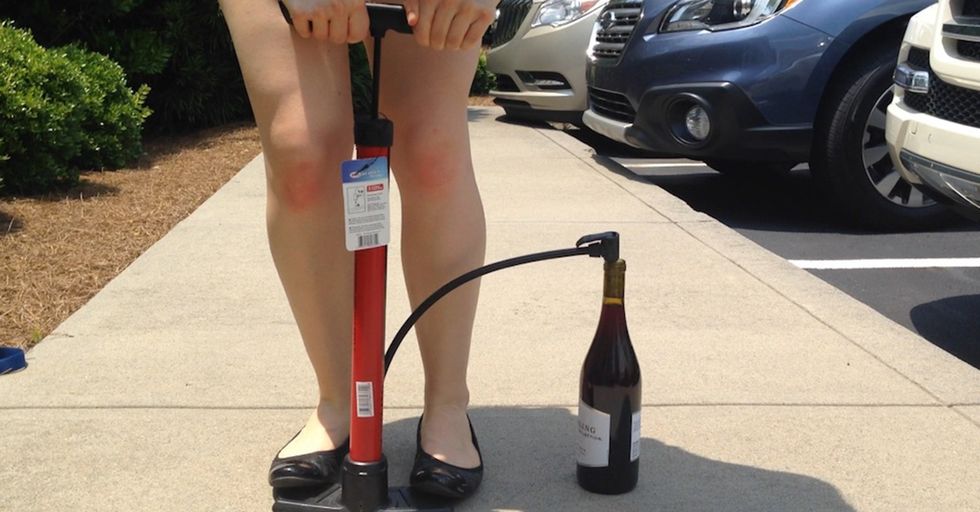 No Corkscrew? No Problem. Here Are 10 Other Brilliant Ways To Open Wine Bottles

Wine's one of the most popular beverages in the world, but it's still something you need to plan ahead for...

...or so you thought. You might have thought that any bottle with a cork needs a corkscrew, but there are PLENTY of ways to get that cork (and wine!) out of the bottle without the requisite tools. Take a look. Not only will you look clever performing one of these tricks, but you'll be the savior of the party!

via: This Fresh Fossil

If you've got a tool kit, you can open a bottle of wine. Take a screwdriver and twist a long screw into the cork, leaving about a quarter- or half-inch sticking out. Then, using the back of a hammer, pry the screw out as you would a nail, and the cork will come out with it!

Turn the Heat On

If you heat the bottle (not a chilled one–it could explode) in a bath of boiling water or using a torch as pictured, the heated air will expand and drive the cork out. It should come out gently, so be patient and let the bottle temperature rise with the water's.

Push the Cork IN It

Cover the bottle with a paper towel, then push down on the cork using a wooden dowel or rod. You might get a cork fragment or two floating around, but you can use a decanter to separate the particles from the good stuff.

Push a small, sharp key into the cork at a 45-degree angle until it's in as far as it will go. Then move the key in a circular motion while pulling back on it.

This is definitely an advanced method, and more suited to champagne than wine, but it will work on both if you follow these instructions.

Seems weird, right? Well, it's another complex method, but one that's far safer than using a sword. Get the instructions here.

Beat the Cork Out of It

Put something soft underneath the bottom of the bottle, like a towel or, in this pic, a shoe. This will get the job done while preventing the bottle from shattering due to the contact. Pound the bottle into a hard stable surface (a paved sidewalk or deck would work) over and over again. You'll see progress quickly. Just keep at it and the cork will vacate in no time.

via: Wonder How To

This is a variation on the method listed above. Put the bottle upside down between your legs, then slap the bottom repeatedly with a shoe. The cork will inch its way out, and when it's sticking out far enough, just remove it with your hand.

Use a Bike Pump

Stick the needle of the ball or bike pump into the cork and pump. The air you're pushing in will quickly push the cork out. Make sure the bottle is held secure, not standing freely like it is in this pic.

Stab the cork with a sharp, pointy knife. Then put it in further by using a twisting motion. Pull upwards in a twisting motion and the cork will start to come out. If you have trouble at the end, stab the side of the cork and use the knife to get it out that way.