Noah Cyrus Says Growing up With Miley Was 'Unbearable' | 22 Words 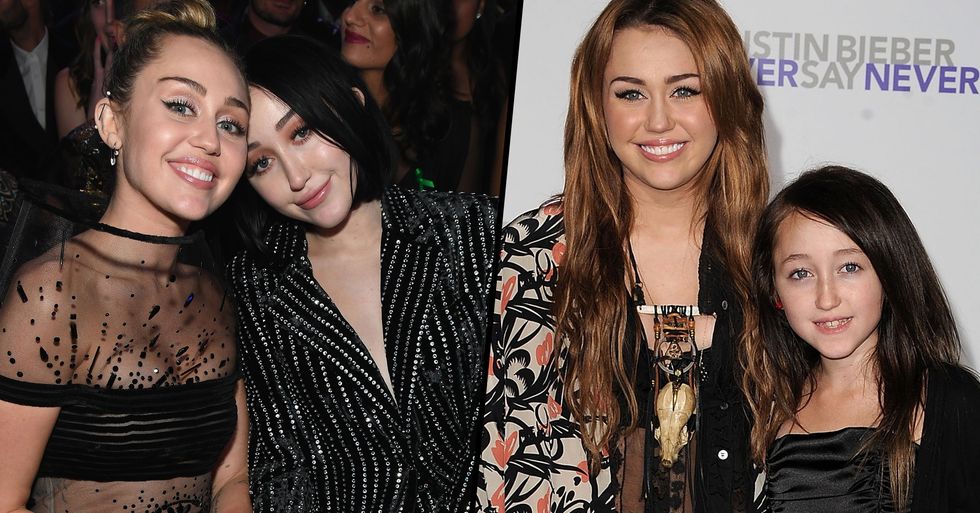 Noah Cyrus Says Growing up With Miley Was 'Unbearable'

Noah Cyrus, Miley's little sister, has opened up to her fans about growing up with the star and how it was actually "unbearable."

Keep scrolling to hear her version of events...

When it comes to Miley Cyrus, all we can talk about is the whole "Miley and Liam" drama...

But now, Miley's little sister Noah Cyrus has opened up about how "unbearable" it was growing up with the turbulent star.

Miley Cyrus and Liam Hemsworth were one of Hollywood's most high profile couples.

With a relationship that spanned across almost a decade, the pair have been in and out of each other's lives for a very long time.

They started dating in 2010 after meeting on a movie set...

And even though they were constantly breaking up and getting back together, they made for one of Hollywood's cutest couples.

MIley's Bangerz era in 2013 saw them split for a long period of time...

And when heartbroken fans thought this was the ultimate end, the couple yet again rekindled their romance.

They finally tied the knot in December 2018.

Miley Cyrus has shared never-seen-before pics from her wedding to Liam Hemsworth in December and WE CAN'T COPE 😭 https://t.co/YcAfedF5ma
— British GLAMOUR (@British GLAMOUR)1550229960.0

The led people to believe that this happy occasion would finally mark an end to their constant breakups.

It seems that the pair were deadly serious about going their separate ways with Miley deciding to start seeing other people very quickly.

The singer moved on fast.

Miley's shocking yet brief romance with Kaitlynn Carter stole our hearts for approximately twelve minutes before things fizzled out.

And, of course, it didn't take Miley long to jump ship onto someone else.

We all know where this one is going...

Back in October, video footage was released of Miley having a cozy lunch with Cody Simpson - just a few weeks after her fling with Kaitlynn.

He was there supporting the singer through all of her relationship ups and downs, and it seems as if the pair finally found some comfort in each other.

The two seemed pretty loved up from the get-go.

Miley revealed just a few weeks after dating that Cody was her "BF" on her Instagram stories and this had the internet reeling.

She continued: "I always thought I had to be gay because I thought all guys were evil, but it's not true. There are good people out there that just happen to have d**ks. I've only ever met one, and he's on this live."

As heartbreaking as the result of their relationship was, it seems as if it was for the best.

Reports surfaced that the couple's divorce was finalized 4 months ago, so it really is the end of an era for all of us.

It seems that both Miley and Liam have been steadily moving on from one another...

And even though there's been a fair share of childish drama on Miley's part, it seems that the couple is better off without each other.

Miley's true colors have well and truly been shown in the last year...

And it's easy to say that not many of us have been left surprised considering the star's turbulent behavior over the last decade.

But now, her little sister has spoken out about life growing up with Miley...

And as we can imagine, it wasn't smooth sailing.

Noah, who is twenty-years-old, is the youngest daughter of Billy Ray and Tish Cyrus...

Noah is also a singer...

And she has recently responded to some certain lyrics that fans believe to be a metaphor about her big sister.

Her latest song "Young & Sad" is all about what it's like growing up with such a huge star in the family.

The lyric that fans pointed out compares Miley to, "sunshine, bringing good light wherever she’ll go,"  while she, "was born to rain clouds, blessed in her shadows."

Noah took to Instagram Live to discuss the song with her fans...

And it was clearly very emotional for the young woman as it didn't take long for her to break down in tears. "I think just the message in the second verse, being born in the family I was in, everyone gave me such a hard time for having a hard time being Miley’s little sister," she said.

Growing up wasn't easy for Noah...

"But you know, I always felt like I was that person that no one gave a s**t about due to what people said to me online," she added, calling the experience, "absolutely unbearable."

She said she wrote that lyric "because that’s why everybody always says to me, that no matter what, I was going to be in that shadow."

"I always believed that and that's so hard for me to overcome, you know, and that was something I heard my whole life, every single day, my whole life," she added. "It was either that or that I wasn’t enough in some way, whether it was the way I look or the way I am. Like I said the other day, sometimes I feel like I don’t even breathe right sometimes."

It is rare for the singer to open up about her personal life...

"Basically, that is what the song is about, and I just wanted to open up about that once and for all, because that’s been a big part of my life, and I probably won’t talk about it anymore. I just wanted to put it out," Noah continued.

The conflicts of social media haven't helped Noah at all...

"Everybody always says you’re giving the people power by seeing it, but I can’t control seeing it. You guys are young, you know the internet. It’s been really tough on me, so that song is just pretty tough to get through," she concluded.

It is undeniable how difficult it must be to grow up in the shadow of your famous big sister...

And it is truly heartbreaking that Noah feels this way, despite being so close to Miley.

For more on the Cyrus family...

Keep scrolling to read about what Kaitlynn Carter recently had to say about her brief fling with Miley...