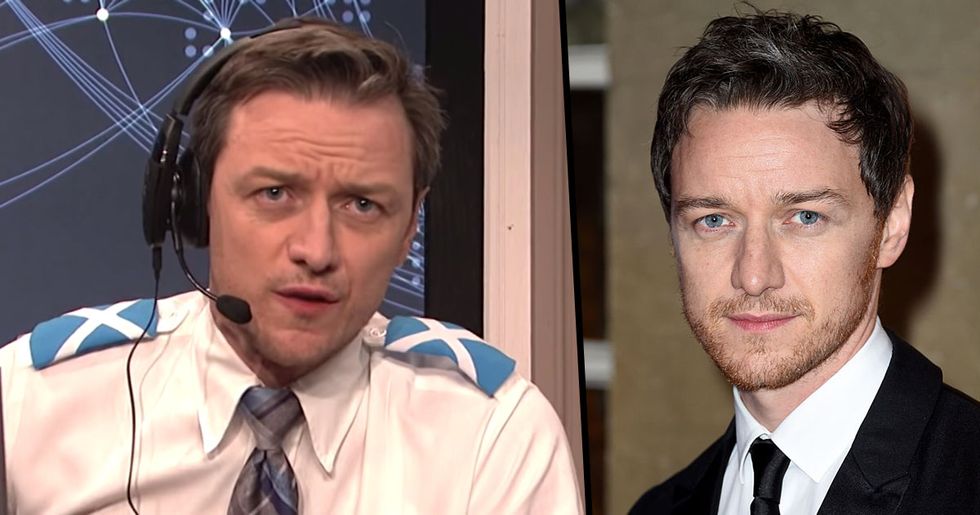 Nobody Could Believe What James McAvoy Sounded Like On 'SNL'

Americans have always struggled with the more far-flung fields of the British Isles.  With famous voices from Wales, Northern Ireland and Scotland frequently donning silly 'English' accents across the pond so they might stand a chance of being interpreted by Uncle Sam's viewers.

And some accents are harder than others.  Glasgow, for instance, is widely accepted as 'on the thick side' even for the British public, so when famous Hollywood actor James McAvoy came on Saturday Night Live to show off his native Weegie pipes, American audiences all over the country were stunned at how difficult they found it to understand him. James McAvoy, known in America for roles such as the X-Men patriarch 'Professor X', who speaks with a typical English accent, and the dissociative identities of M. Night Shyamalan's Split, most of whom are American.

But McAvoy, is actually from Glasgow, and an underserved, working class area at that (bucking the trend of upper-middle class, privately educated British actors making it in Hollywood) - McAvoy's accent on SNL is entirely natural.

The Scottish accent in mainstream American entertainment is hard to come by, especially when it comes to Hollywood.  Zany Scottish actors such as Gerald Butler manage to hold onto their native voice in the states, whereas other's such as Sean Connery have to the twang when it comes to play big roles.  The most famous Scottish voice in America is probably that of Willy from The Simpsons.

Many Scottish actors pandering to an American audience seem to adopt an English accent so that they can be understood. And not just any English accent, by a typically posh, southern one.

People wouldn't believe how strong Academy Award winning actor Sean Connery's accent is. He's from Fountainbridge, a very... scottishy... area of Edinburgh. But, when playing James Bond, he had to put on a typical English accent so he could be better understood. Even though James Bond is from Glencoe - in Scotland.

Then there's whatever Ewan McGregor is doing in Star Wars.

I'm not even going to try to analyse that strange voice Perth actor, Ewan McGregor, has to pull in George Lucas' prequels.  It's not Scottish, 'that's for true', but it certainly isn't English.

The English accent of Edinburgh native Iain Glen as Jorah Mormont in HBO's blockbuster Game of Thrones is actually quite good, but it underlines another incidence in which an American studio has asked a Scottish actor to mask their real accent.

Appearing in the Bourne films as the mysterious 'Abbot', Brian Cox joins the broad squadron of Scottish thespians, hiding their Scottish accent under an English one.

James McAvoy was born in Glasgow, a city in Scotland that sports the notoriously thick 'Weegie' accent, hard to interpret for some Scots, let alone Americans.

McAvoy hails from a particularly hard-up area of Glasgow, a council estate called Drumchapel. Areas like Drumchapel tend to instil a much stronger accent in the residents than more middle class neighbourhoods.

And it runs in the face of British acting

McAvoy's working class roots very much bucks the trend of British, Hollywood actors coming from very wealthy areas and going through private education, such as Etonian, Eddie Redmayne (a classmate of Prince William) and Harrow-educated, Benedict Cumberbatch (who has possibly the poshest name of all time).

Many British commentators have labelled the ubiquity of upper-middle class, privately educated British actors as 'damaging for society'.  And actors like The Walking Dead's David Morrisey have weighed in to say 'only people with rich parents could hope to make acting a career.'

Here's James McAvoy on The Late Show with Stephen Colbert discussing his humble roots and how he learned to mask his Glaswegian accent.

James McAvoy was an advocator of Scottish independence back in the 2014 referendum, he bases his opinion on a critique of the Scottish character - here's him talking about it.

Many Scottish Hollywood actors joined McAvoy in his endorsement of the Scottish independence campaign.  With actors such as Sean Connery, Robbie Coltrane and Brian Cox all showing a streak of Scottish Nationalism that's, above all, typically Scottish.

So what does McAvoy say makes Scotland Scottish?

It's a mix of things apparently.  The main characteristic McAvoy sites is a close relationship with defeat, which Scotland has suffered a lot. As well as a love for deep-frying almost everything.

Now that we've got some background on Hollywood's Scottish population and McAvoy himself, let's move on to his appearance on SNL.

And McKinnon's not bad either...

Vocal chameleon and SNL regular Kate McKinnon struggles slightly with her Weegie accent, but it must be said, it isn't bad.

Here's what people were saying...

Here's the typical American reaction to the sketch. Disbelief that spoken english could sound so impenetrable.

This Scottish viewer couldn't even understand what James was saying.  Showing how insular Glasgow culture can be.

Here's another typical reaction to the Glasgow accent, finding it really sexy. Someone should tell them.

Here's another swoon from the Weegie inflection, will they keep coming?

This commenter saw the political side of the sketch. Drawing a line between this and the recent Trump Government Shutdown.

Here's an 'actual' air traffic controller weighing in on the difficulties of the job.

Here's an one viewer so taken by the video, that they're committing to mastering the accent they can't understand.

SNL has always been famous for its incredible impressions so there's plenty to choose from for a list of favourites.

Who'd have thought McKinnon would play the boy-wonder pop star so well. It's the bulge and the "my Peepee's in there..."

With 32 million views, I'll let the numbers speak for themselves for this one.

The writing, the voice, the behavioural motifs - it's all perfect, and written so quickly in the wake of the controversy.
20%