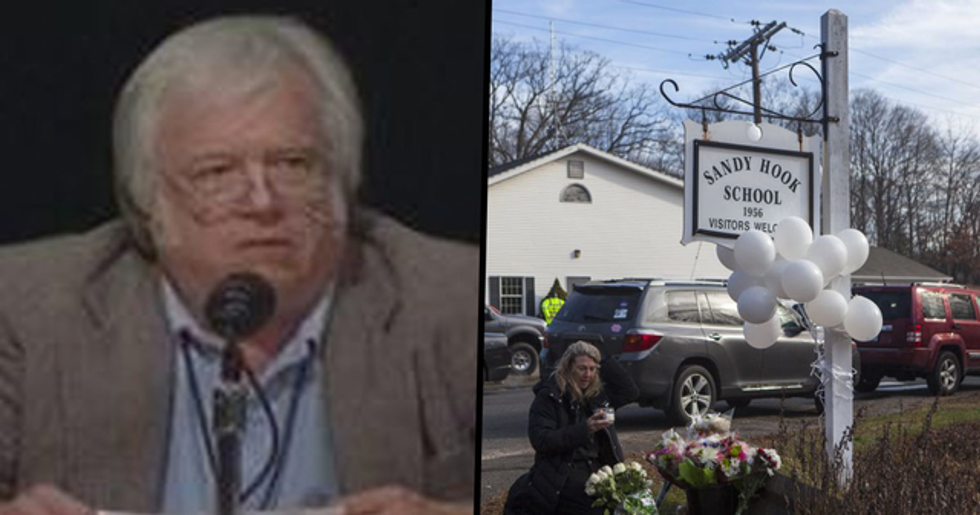 The Sandy Hook Elementary School shooting was one of the most horrific mass shootings in our country's history.

On December 14th, 2012, Adam Lanza fatally shot twenty innocent children and 6 adults at the school before taking his own life. The massacre horrified people all over the world, and the name Sandy Hook has become universally known as a result of the heartbreaking attack.

But, of course, there are people out there who believe that the full thing was a setup. Nobody Died at Sandy Hook, which was written by James Fetzer and Mike Palacek, claims that the Obama administration staged the full thing and that no children died in the attack.

But now, Fetzer has been ordered to pay one of the victims' father a $450,000 as a result of his disgusting actions. Justice has finally been served.

But for all the wrong reasons.

In 2012, our country saw one of the deadliest mass shootings in our history.

On December 14th, twenty-year-old Adam Lanza murdered his own mother in their home in Newtown, Connecticut, and then set out to the Sandy Hook Elementary School with a military assault rifle, 2 semiautomatic pistols, a shotgun, and several rounds of ammunition.

He stormed the school...

And opened fire upon numerous classrooms. Though teachers made valiant attempts to safeguard their classrooms and students against Lanza, for some it was to no avail.

6 teachers were killed while shielding their students...

And a further twenty children were fatally shot in the attack.

Lanza killed himself with his shotgun.

The majority of his victims were only 6 or 7 years old.

And the Newtown community came together in mourning for the sons, daughters, brothers, sisters, and mothers who lost their lives in the devastating attack.

The conspiracy theorists crawled out of their caves and began making wild claims that the Sandy Hook massacre was a "setup", and "never really happened."

And then the book came about...

Written by retired professor, James Fetzer, and Mike Palacek, Nobody Died at Sandy Hook claimed that the shooting never actually took place and that it was all a stunt organized by President Obama as an excuse to tighten up gun laws. By denying that this massacre was genuine, not only were they insulting the memories of the victims, they are causing more heartache to the families affected by the attack.

The shooting did bring up the age-old question...

What will it take to change our gun laws?

Obama had stated that he would use all the powers of his office to prevent future mass shootings - The hallmark piece of federal legislation to be inspired by Sandy Hook was the proposed Assault Weapons Ban of 2013. The proposed bill would ban the sale of more than 150 specific firearm models as well as magazines that held more than 10 rounds of ammunition.

However, despite widespread public support...

Yet, regardless of this...

The conspiracy theorists still believed that the whole thing was a hoax, even though there was next to no change to our gun laws following the attack.

Many of these conspiracy theorists plagued and terrorized the families of the victims online and face-to-face.

And one Dad decided that enough was enough.

Leonard Pozner lost his 6-year-old son, Noah Pozner, in the Sandy Hook shooting. Nobody Died at Sandy Hook personally attacked Pozner, and claimed Noah’s death certificate was fake and that Pozner had lied about his son being dead.

He was harassed by these conspiracy theorists for years.

He revealed how he had been repeatedly terrorized by conspiracy theorists, including by people who had posted messages on his late son’s memorial website. “I had attempted to be transparent. I published Noah’s death certificate on a social media page I used as a memorial page. And after doing that I was accused of being a fake and a fraud and that changed everything," he said, according to the Wisconsin State Journal.

Pozner has been pushing back for years against hoaxers who have harassed him...

And he has even been subjected to death threats and claims that he is an actor and that his son Noah never existed. The years of harassment has resulted in Pozner suffering from PTSD. He said the Nobody Died at Sandy Hook book caused him to worry about his safety and that he was concerned about his surviving children.

Backed by dozens of other Sandy Hook parents, Pozner filed a defamation lawsuit against the authors of the book.

And, this week, James Fetzer has been ordered to pay Pozner $450,000 in damages.

The jury in Wisconsin settled on the amount that Fetzer had to pay the bereaved father. Mr. Pozner thanked them for “recognizing the pain and terror that Fetzer has purposefully inflicted on me and on other victims of these horrific mass casualty events, like the Sandy Hook shooting."

James Fetzer didn't have much to say after the ruling...

But he did take the time out to call the damages “absurd" and announced his intention to appeal.

Let's hope the Pozner's and the other victims can finally get some form of justice.

Mr. Pozner and Veronique De La Rosa, Noah’s mother, are also suing Alex Jones, another prominent conspiracy theorist, for defamation. The Infowars presenter is also being sued by at least three other Sandy Hook parents after he too, claimed the massacre did not occur.