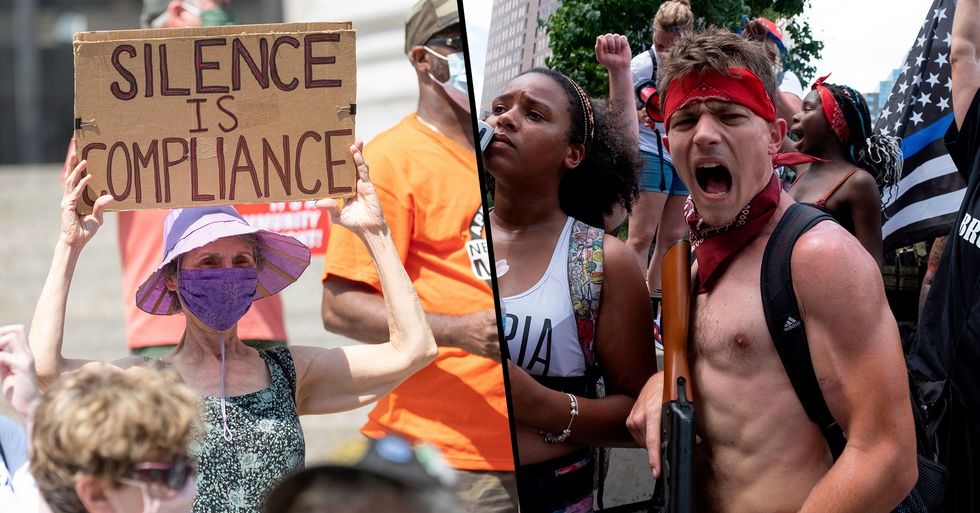 Let's face it, America has gone through a lot this year, and it's still pretty messed up. With things in America being worldwide news lately, one Reddit user has asked what non-Americans think of it all.

Keep scrolling for some of the best responses...

Let's be honest... America is going through a lot at the minute.

And those that are looking in from other countries must think we're crazy.

And they have been pointed out in one particular Reddit thread.

"What is your genuine reaction to what’s going on in America right now?" And the responses have definitely been eye-opening...

Let's take a look at some of the best submissions...

1."For me, I feel like nothing in America can surprise me now, I'm just like, 'Of course that's happening now.' I feel sorry for the sane people over there." —el_papy

"Being in the UK right now kind of feels like being in a little boat that has broken down and everyone’s too busy being mad at the captain to fix anything. But then you look to the left and there’s a big cruise ship burning as it sinks with people fighting on every deck, and the captain’s throwing gasoline on everything, and you feel a little bit better about the shitty boat you’re in." —SocksPls

"'America, amirite?' has replaced talking about the weather. Everyone is dumbfounded by what's going on. On the other hand, it's sad that we know more about US politics than local politics. People protest for BLM in Berlin, but nobody talks about other things going on elsewhere." —n1co_ds

"Canadian here. Like others have said, it’s really all beyond comprehension. To see a once-great nation plunged into chaos and insanity, being ripped apart by a disease that is going unopposed, and is even supported by the country’s own president and many citizens. My country is going well, all things considered, but I’m a bit scared that it’s going to make its way to us. We’re protected by a thin border and border patrol really. The American tidal wave could be disastrous to us if we let them through. We need to keep the borders closed for non-commercial travel."

"It honestly just looks like a reality show. It's really how you'd expect a country like America to be." —CliffBurton6286

"I feel like I'm Stan from South Park, watching Randy and his mates fuck shit up, unable to do anything except just say 'Dude?!' in a really exasperated voice." —Londonloud

"Confusion. It’s so bizarre, how is it possible? Followed by empathy. A ton of empathy." —EarthlyGeo

"I’m from Afghanistan. This shit don’t faze me." —sablelord

"I'm getting used to it. I take a quick look at the newspaper, read something like 'US police kills suspect in custody,' turn the page and get upset because the construction site on the Autobahn takes longer than planned." —realultralord

"Honestly, it's borderline beyond comprehension. It constantly feels a little more like a poorly written soap opera than real life." —skii9967

"I knew there were lots of idiots, but the sheer quantity is mind-blowing. And how so many Americans just can't handle a view that's different to their own, or at least allow others to have a different view, is crazy." —jajamochi

"You're so busy flinging shit at each other, you can't see the mess you've made." —DavosLostFingers

"What. The. Living. Fuck." —MusyTheGamer

"I used to be a fan of the USA. At present, for me, it's like watching your idol self-destruct live on camera. Really sad to see this." —trojien

"For me, the craziest (and sadly, most predicable) thing was how there were Americans protesting face mask mandates. You’d think the most patriotic thing they could’ve done for their fellow countrymen would be to protect them, but nah." —spriteshouter

"I can't believe how Americans can politicize EVERYTHING?! Wearing masks, postal service...and before these newer topics, universal healthcare, free (or at least vastly cheaper) university, higher taxation, etc. Those things are a reality in most developed countries, but in America it seems like you can just scream 'socialism' and people are against everything. From my German point of view, the two-party system and electoral votes are seriously fucked up, and even the moderate Democrats are pretty right-wing." —raddmusic

"It looks like a collapse and I think I'm grieving. It's like seeing a great teacher you used to adore slowly become an asshole." —soupsoapsoup

"In the immortal words of Michael Bluth: 'I don't know what I expected.'" —Terramagi

"From Canada: your country is having a serious detrimental effect on ours right now, because morons are importing your politics (left and right). It's not your fault that we're so easily influenced, but it's still frustrating." —JamesBourne009

"I keep wondering why the 'richest' country in the world still doesn’t have national free health services." —JohnnyViriats

"I don't wanna talk about Trump, but wow, the anti-maskers piss me off. Like, dude, wear a fucking mask. How hard can it be?" —LordFrob

"I used to really admire America. The last few years have changed that perception drastically. The blatantly corrupt politics seem to have the whole country in such a tight grip that from the outside it looks like a third world country. Your president is lying constantly and obviously, yet he has outspoken followers in the millions who just disregard his lies." —wangsigns

"I genuinely feel sorry for you people." —Oden_Bitterblight

25. "Bit sick of hearing about it, to be completely honest." —seesnawsnappy Keep scrolling to find out what non-Americans find weird, that we think is totally normal...