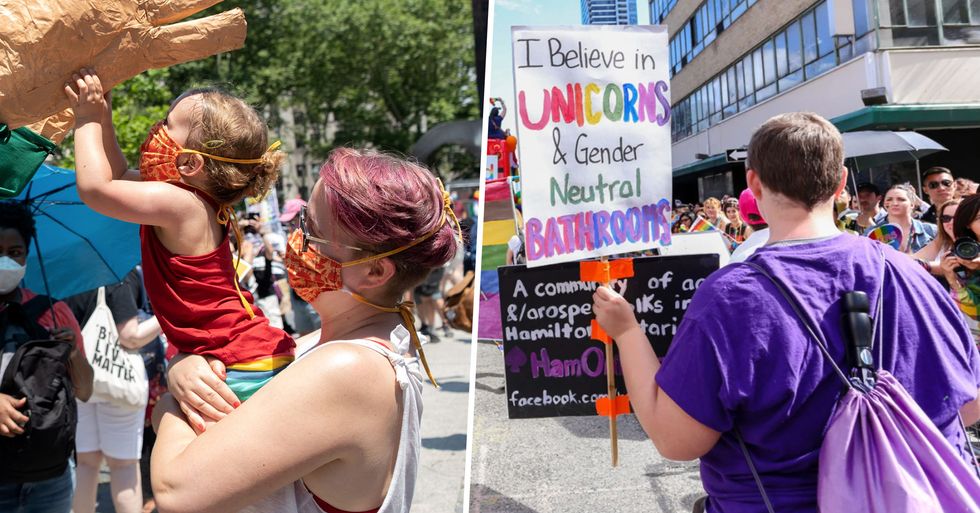 Nonbinary Person Explains How To Talk To Kids About Gender

Gender can be a difficult topic to discuss with your kids, but one nonbinary person has given parents all the right tools to use when approaching the subject...

In today's day and age, more and more people are identifying as "non-binary."

Long gone are the days where there are simply "men" and "women". It's 2019, and there are hundreds of different ways in which a person can identify... And non-binary is certainly one of the most common.

But what exactly does non-binary mean?

According to the National Center for Transgender Equality, “non-binary" is the term people use to describe genders that don’t fall into the 2 categories of male or female.

Many people feel more comfortable with identifying as non-binary...

But, of course, there are several people out there who can't bear the idea of a person identifying as something outside of the "normal" genders.

So they lash out.

Like most who are uneducated on the topic, many people sit behind their keyboards and send abusive messages to those who identify as non-binary... for reasons completely unbeknown to most.

Understandably, this kind of abuse takes a toll on people's mental health...

And some think the best way to address the issue is by teaching kids from an early age all about gender. And one non-binary person has given us the tools to talk to our kids all about it...

We all know kids ask a lot of questions when they're trying to figure things out, and it's important not to silence them or pretend we know all the answers.

Especially when it comes to topics such as gender, when you stop a child from asking questions and shushing them, you're automatically teaching them that the topic is wrong.

There's a much better way of talking to children about gender if the topic arises...

Although it might be tricky at first, one gender-neutral person has given us some tips about how to start the conversation...

At birth, we are assigned a gender and that's that...

"This first assumption of gender is like the flick of a domino—when one is hit, all the surrounding pieces that create the line fall too. In this case, gender is the structure, and all of the stereotypes and expectations of gender roles and gender expression are the dominos that fall and can be the collapse of one's true identity."

But biological sex is not the same as gender...

"Both sex and gender are fluid. Knowing this can help us view sex and gender as more of a pendulum or a wave instead of predetermined answers leading to only one conclusion."

A person who does not identify as the gender they were assigned at birth is described as transgender.

"Some transgender folks don't identify as male or female but instead, feel a mix of both or neither genders. We shouldn't be expected to fit into the confines of a binary, male and female world and be restricted to gendered pronouns like 'he' and 'him' or 'she' and 'her.'"

There are many other terms that fit under the nonbinary category...

Such as "Gender fluid, agender, and genderqueer, but each person's experience is unique, so it's best not to apply labels one hasn't given us permission to use. Personally, I was assigned female at birth, but my identity does not fit into the binary of being male or female. I am nonbinary and I use 'they' and 'them' pronouns."

There has definitely been big changes in creating a more accepting society...

"Clothing lines, toymakers, and stores are rebranding their spaces to be more inclusive. We are teaching our daughters that strong and smart are achievable and desirable qualities. We are teaching our sons that talking about and working through emotions are less toxic solutions than violence and hiding mental illness."

Although we're on the right track, parents still need to be aware of how to talk to their kids about these subjects...

"Having meaningful conversations with kids is part of catching up to an increasingly diverse America."

"A century ago women in the United States generally weren't permitted to wear pants, accessing higher education was rare, and they were still months from having the right to vote." Iverson also addresses that Native American cultures have always seen gender as fluid.

"If a child asks you about someone's gender, don't assume or pretend you know."

"Use thoughtful and gender-neutral language, such as 'they' and 'them' pronouns, to let your child know that until a person self identifies, you can't be sure." Iverson suggests responding saying, "We don't always know just by looking at someone how they feel inside, but what makes you curious about it right now?"

They addressed the difficulties gender-neutral people face while out in public...

"Because there is rarely a gender-neutral option when I am out in public, I choose to use the women's bathroom. Recently I was in a stall and heard a child ask her adult if I was in the right bathroom. I present as masculine and when I walked in, this child assumed that I was a boy in a girl's bathroom. I tensed; I have been in too many situations where a parent gets the answer wrong. But in this case, the mom responded well: 'I know we are in the right spot, and I am going to trust that that person knows they are in the right spot too.'"

"If I hadn't been on the toilet I would have thanked her, but using gendered bathrooms is exhausting, and talking to a stranger in that position felt like too much. I wished all parents could be so clear and affirming. It's not the kids who struggle to adapt and accept. Parents fall into assumptions based on years of biases and learned constructs about gender and gender expression. But if parents could step back and observe themselves, they would realize they are already having similar conversations with their kids. We tell our kids that any person can use a particular color, work in any profession, and wear any clothing that makes them feel good. Gender identity can be explained in the same way."

It's so important to teach our kids that it's ok to be who we want to be, as long as it doesn't harm anyone else...

Iverson highlights the importance of safety and that safety and comfort are two separate things. "The bathroom is a great example of this. People are used to bathrooms being divided into gendered options of male or female, but those spaces become unsafe for gender nonconforming, transgender, and nonbinary people when others begin to police where they think we should pee."

"Nonbinary people need to be able to go to the bathroom that makes sense for them to be safe and healthy. Others might be uncomfortable for a while as we transition to something new, but discomfort is something that we can handle while we get used to ways of doing things that are safer and healthier for all, instead of leaving out some."

Now age 10, she understands why some people misgender, as they don't understand what it's like to be transgender.

Although she often corrects people as she wants her parents to feel comfortable for who they are.

Including at school with other kids and teachers...

"If someone asks me, 'Is that your dad?' I say 'Yup! That's my parent!' or if they ask if that's my mom, I say, 'Yup that's my parent!' So I'm correcting them without it being weird," she says. "It makes me feel really good when my friends and teachers get it right though, because I don't even think of [my parent] as trans; they're just my parent and this is how our family works. We are just a regular family."

While it might be a little uncomfortable at first, it's important to remember to be kind and accepting of others while you're learning.

And it's ok to get things wrong while you're trying to understand.

We all deserve to feel good and to be seen for who we are.