The victims ranged from fifteen, the youngest, to ninety, the eldest. | 22 Words 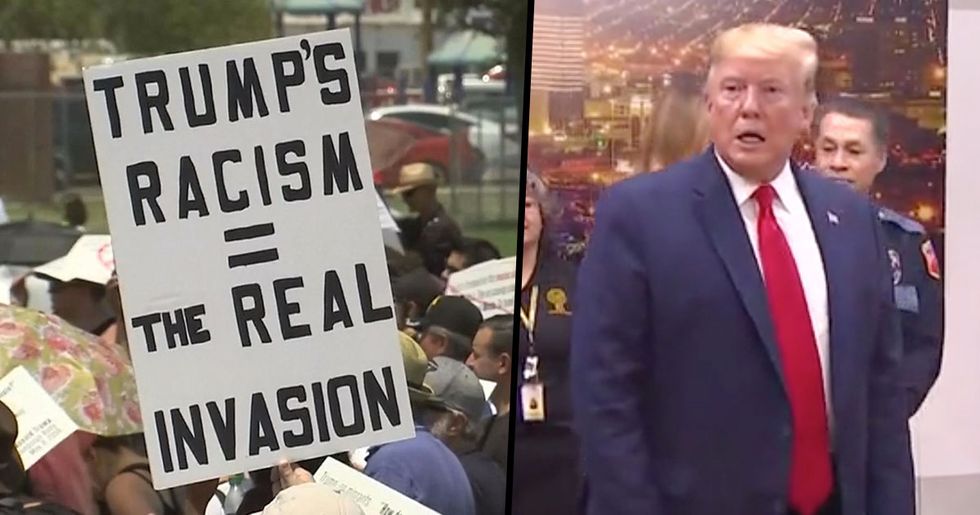 This month seems to have started off in the worst possible way for American citizens, particularly those native to the states that have seen yet more mass shootings. El Paso, along the border-state of Texas and Dayton in Ohio, have been the latest states to witness the horrors of a violent massacre which, in total, saw the death of thirty-one of its people. And the worst part is that the two attacks occurred back to back - a mere thirteen hours between them.

The news hasn't been easy for everyone else to stomach either, with protests occurring up and down the country calling for tighter restrictions on guns, but it seems as if the president is not listening. Instead, he's caught up with playing the blame game and we're sick and tired of it.

So were the victims of the El Paso shooting, who refused to meet with Trump when he came to visit them in hospital. Keep scrolling to find out why...

Let me clear one thing up, this "lone gunman" is a terrorist. A terrorist. Say it with me, he's a terrorist. I have seen many news outlets using other, nonchalant terms to describe the killer, but that's not what we're going to do.

We're going to call it as it is. A terrorist walked into Walmart carrying an assault-style rifle.

When he got into the busy store, he looked around at the shoppers, who unaware of the terror that was about to be unleashed on them.

Police first received reports of gunshots at 10:39 local time and acted accordingly, evacuating people out of the store as well as shutting down all the surrounding businesses.

In addition to the fatalities, another twenty-four people were left with injuries.

The victims ranged from fifteen, the youngest, to ninety, the eldest.

The terrorist purposely targeted this region because of its growing Hispanic population. Approximately 600,000 of El Paso's residents identify as Hispanic or Latino.

He was just focused on killing, as a response to the "Hispanic invasion of Texas."

Security cameras picked up footage of the terrorist as he entered the store wearing a dark t-shirt and ear protectors. He was carrying an assault-rifle in his hands.

Even though he committed the most heinous crime, he did it legally.

The shooter managed to acquire the weapon legally and carry it into Walmart without anyone batting an eyelid due to the "open carry" laws in the state of Texas.

As well as being a terrorist, the shooter was also a racist.

But you probably figured that one out already. He was the author of an online message board on 8chan, where he promoted hate-filled speech, saying that he was against "cultural and ethnic replacement brought on by invasion." Paranoid, much?

In a four-page document, he outlined his motivations.

The message was posted approximately twenty minutes before the attack took place in Walmart. And it gets worse. He expressed his support for fellow terrorist, the Christchurch shooter, who shot and killed fifty-one people in New Zeland earlier this year.

The victims of the horrific attack were Muslim.

It was New Zeland's most destructive mass shooting in history. The terrorist seems to have inspired the next generation of white-boy shooters and you can deny it as much as you want, but we're all growing extremely concerned about white supremacy.

More white boys have caused death to American citizens than any other group.

The El Paso shooting was considered one of the deadliest gun attacks in the history of the country and it ranks amongst other dealy shootings such as the Baptist Church Shooting in Sutherland Springs, Texas, where twenty-five people, who were in the middle of service, were shot and killed on the spot.

White supremacy is responsible for more gun deaths in America than any other group.

Yet it seems like we're just skirting around that fact. Instead, we point fingers at immigrants and other minority groups when most cold-blooded killers have been bred on homegrown soil.

So let's tackle the problem.

We need to be thinking about this issue seriously. How many more deaths need to occur before someone tightens gun laws? We still can't believe that there are people out there who think they are already tight enough. Is that why people like the El Paso shooter got his hands on an assault-rifle?

And don't even bother telling me that "he passed background checks."

Clearly, the checks weren't carried out thoroughly enough. If they were, they would have known that he's a white nationalist who is planning a terrorist attack against the Hispanic community.

Even his mom was concerned about his intentions!

Time released an article claiming that the mother of the shooter had filed a report against his own son due to her concerns about his weapons.

The call was passed to a public safety officer and dismissed.

According to CNN, Lori Brown Crusius was concerned about her son’s age, maturity, and lack of experience when handling an "AK" style weapon. However, the officer told her that he wasn't breaking the law, so he could own such a dangerous weapon.

And she was right.

Look at the outcome of dismissing such a call. His own mother knew that he wasn't in the right frame of mind to keep an assault rifle in his possession, yet the law overturned her concerns and that resulted in over twenty deaths. Great job (!)

The shooter is now being charged with capital murder, so is eligible to face the death penalty.

John Bash, the U.S. Attorney for the Western District of Texas also announced they are considering filing "domestic terrorism" charges as well as "hate crime" charges against the suspect. You don't need to consider that, John, he's a racist terrorist. Charge him.

And just thirteen hours after this horrific attack, down in Ohio, it started all over again.

From one grieving state to another. Over 1500 miles north-east of Texas, another terrorist had opened fire at 01:07 local time. In a popular district known for its nightlife aspect, Connor Betts opened fire outside a nightclub called "Ned Peppers."

Even though police officers responded within thirty seconds, the damage had been done.

Nine people were killed and a further twenty-seven were injured with a .223-calibre assault rifle that he ordered from Texas. I see a common theme with all these shooters.

Apart from also being a racist bigot, this white boy terrorist also sang about "butchering women."

Scroll with caution for this next part. He was involved in a "pornogrind" metal band who released albums called "6 Ways Of Female Butchery" and "Tilt Bench for Gynecology Or Total Rape."

The band performed across America’s Midwest and news about the band had primarily been removed from the internet once it was discovered that the singer was the suspect in the Dayton shooting.

In the wake of these two horrific attacks, the president said that we need to "rally together."

A man who promotes division and hatred is urging the American people to stick together. We're not buying this BS. The pressure that comes with dealing with the mass shootings while trying to keep his supporters (who are primarily avid gun fans) must be getting to him.

So instead of actually doing anything about it, he tried to blame video games.

A classic Trump strategy. Blame something else. We understand that video games do promote violence, but the biggest reason why his theory is flawed comes from Japan. Japan is home to the most video game players, though their crime rates have been at an all-time low. So there seems to be no evidence that video games are the cause of mass shootings. Shocker (!)

And people are sick and tired of the president skirting around the problem.

As an act of kindness, Trump decided to go and visit the victims of the shootings but was met with nothing but hostility.

Protests took place in both states, condemning Trump's response to the tragedies.

Despite Trump's secretary claiming that "everyone was excited to see him," the evidence begs to differ. People took to the streets with signs and banners saying: "Racist, go home!"

Some Trump fans also took to the streets but were easily outnumbered.

It's not a matter of who you support politically anymore. This is a social issue that is out of control and it seems as if the president isn't going to do anything about it.

Besides "visit" the El Paso responders and victims in the hospital.

Unsurprisingly, none of the victims still in the hospital wanted to be visited by the man who promotes the use of guns. Some victims, who had been discharged from the hospital did come back to see the president, but everyone who was still a patient declined the offer.

However, they did allow visits from Democratic leaders such as Veronica Escobar.

Escobar also refused to meet with the president saying: "his racist and hateful words & actions" had caused pain to her community and her country.

Mr. President, here's some advice for you:

No one cares about getting a "surprise" visit from you, clearly, they go as far as opposing it, so instead, make us all happy and put some tighter restrictions in place throughout the entire country. That is all.