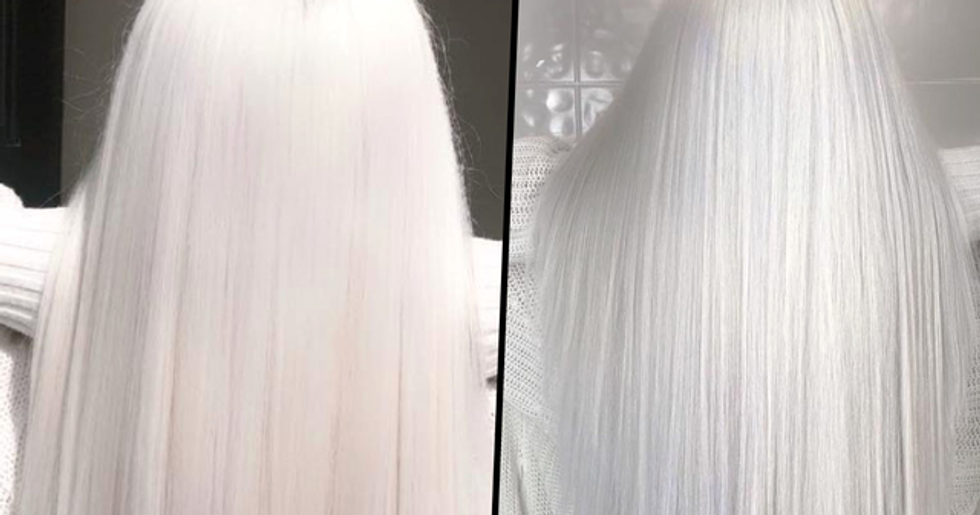 Nordic White Hair Is the Lightest Shade of Platinum Ever

"Nordic White" hair is the latest trend to get the internet talking. As we go through increasingly rapid fashion fads, it can feel hard to keep up. But this one seems to be part of a bigger celebrity trend in which everyone is going lighter with their hair.

Is the Nordic White really a new and unique color, though? We have a feeling we know where the inspiration came from! Read to the end to find out who it was that we think really inspired this new color trend.

Hair color has always been something that people seem to feel pretty comfortable experimenting with.

There are few things that we can change about our appearance without surgery or overhauling our closets and by far the easiest thing to change is our hair. From wacky haircuts to bold colors, people out there have tried it all. And no one seems to change their hair as much as celebrities. Do you remember that time when Miley Cyrus went blue? Wait until you see her latest haircut. It'll certainly give you flashbacks to another time!

There was a time when, inexplicably, a bunch of white people decided that they wanted to have corn-rows. Back then people weren't as aware of cultural appropriation as we are today. It's hard to imagine Justin Timberlake doing this with his hair nowadays.

Some hairstyles were never good to begin with.

Experimenting is often a good thing. The best way to move forward is to try new things. Experimenting allows us to develop and to learn from our mistakes. So maybe it's lucky for everyone that Shia LaBeouf made this hair mistake so that no one else has to.

David Beckham is often at the forefront of men's fashion and he has a long history of memorable styles. Some have been on-point, others have definitely missed the mark. Most of them he doesn't regret, but he has said that he regrets the matching purple outfits that he and Victoria wore on their wedding day. Yikes.

Sometimes fashion is ahead of its time.

20 years ago David Beckham wore a sarong. The uproar around a man wearing a feminine piece of clothing seems so rid… https://t.co/k1Hk7GCF0o
— Gordon Spierin (@Gordon Spierin)1532029187.0

Sure, David Beckham made some pretty questionable fashion choices, but, in many ways, Beckham can be seen to be ahead of the times. Twenty years ago, he didn't care about gender expectations. He just wore a sarong because that's what he wanted to wear. People wouldn't find it so funny now. We think he looks great!

He was also one of the first promoters of the blond 'do.

Beckham's had corn-rows, man-buns and a shaved head, but it's this blond look that's making a come-back. Keep reading to see which other male celebrities have gone blond recently.

Lucy Hale is best known for two things - her role as Aria Montgomery in Pretty Little Liars, and her constantly-changing image. Usually a fan of lighter tones, she's just turned brunette. Is this one going to stick? And she's not the only Pretty Little Liars star to go for a change. Wait until she sees what Shay Mitchell has gone for now.

It seems like a lot of celebs are going brunette right now.

Hale's not the only lady to make a pronounced switch. Actor and singer, Rumer Willis, is usually seen with long, flowing, blond hair, but it looks like she's decided to turn brunette recently. Seeing her like this, we can't help but wonder why she was ever blond in the first place. She looks great! And she definitely resembles her mom, Demi Moore, more with darker hair too.

Charlize Theron has had short hair for a while, but this new, darker bob is beautiful. The darker hair certainly makes her look more serious, but we love it! Is this the end of her blond 'do, or is she just having a break?

It looks like bobs are becoming more popular in general.

Theron and Willis are by no means the only people going for a shorter look. Kristen Bell, who provides the voice of Anna in Frozen and stars as the title character in Veronica Mars, is usually seen with much longer hair. It looks like she decided it was time for a change and we're loving it!

A new haircut for a new challenge.

2018 was a tough year for Selma Blair, who discovered in August that she is suffering from Multiple Sclerosis (MS). The Cruel Intentions star has faced it with immense dignity and honesty, as she continues to document her battle on social media. This year, she is ready for battle as she sports a new, blond bob, as opposed to her traditionally darker hair.

Jada Pinkett Smith can be seen here with blond locks that, as she (sort of) points out, aren't too dissimilar to Justin Timberlake's hair back in the 90s. And she's not the only one in the family bringing back the look. Wait until you see Jaden's hair.

Shay Mitchell decided to give the blond look a trial run, too.

Okay, so she hasn't actually dyed her hair blond, but she did give it a go with a wig. It's still possible that this Pretty Little Liars star will dye her hair blond one day though. We think it suits her! And if you think that this looks like a light shade of platinum, wait until you see how blond the Nordic White hair is.

Some people aren't too keen on going blond, though.

Allison Williams came to fame with her role on Girls, but it was her role in the highly-acclaimed Get Out that brought her to the world's attention. She looks great whether she is blond or brunette!

Even some redheads are trying the blond look.

One of the things that Isla Fisher is best known for is her long, red hair. But now it looks like she might be doing a Lindsey Lohan and saying goodbye to her natural hair color in favor of something a little lighter. Is 2019 really the year of the blonds?

Hannah Montana is back.

Miley Cyrus is a true trendsetter. She does what she wants rather than following other people. And it looks like, for now, she has decided to go full-circle and return to her Hannah Montana haircut. It's a long way from her blue pixie-cut, but if she's back with straight blond hair and bangs, maybe the blue look will be back soon too...

It's not only the girls who are turning blond!

In a shock departure from his slightly darker short back and sides, Channing Tatum has gone for a buzzcut and bleached his hair blond. What do you think? Was it a good decision, or should he go back to his regular look?

Jaden Smith has always been experimental.

In a look that is incredibly similar to his mother's, Jaden Smith decided to rock some blond curls. Although it looks like he may already be switching to pink... Is it already the end of the blond heyday? The next Disney star doesn't think so...

Miley isn't the only Disney star to turn blond!

Following the success of his role as Ted Bundy in Extremely Wicked, Shockingly Evil and Vile, Zac Efron decided to change up his look a bit. And he's not just gone blond, he's gone platinum blond. What are your thoughts on it? But still, it's not quite as light as the Nordic White!

Bieber has always been blond and always he looks for the next trends. He has revealed in a recent Instagram post that he's been struggling recently, but it looks like his blond locks are still going strong. We hope you start feeling better soon, Justin! But he's not the only blond in his family...

After a few months together, Justin Bieber married actor, Stephen Baldwin's daughter, Hailey, despite being in their early twenties. Maybe it was their similar hair that drew them together...

Is the Nordic White the perfect way to freshen up for spring?

Spring is a great time to try out a new hair color. Put your dusty, winter self behind you and freshen up with a new style! We think that Nordic White is the perfect color for the season! But look out for the comparison photo below; it looks so different when it's directly under light.

This is one seriously gorgeous hairstyle.

Nordic White hair has been around for a while, but it's never been as popular as it is right now. Apparently, the end of winter is inspiring this change, but we've got a few different ideas. See who we think inspired this hairstyle at the end of the article.

The key to making it true Nordic White is all in the roots.

In recent years, trends such as ombre have become increasingly popular, in part because they allow the wearer to grow it out without having to go back to the hairdresser's every two weeks. But Nordic White is different. The aim is a uniform color throughout, from roots to tips.

Would you go for a "white out"?

The shimmery look of the Nordic White hair is definitely cool, but the maintenance of hair being such a uniform color must be a nightmare! Do you think you have what it takes to dye your hair such a light shade?

One hairdresser is particularly proud of his work.

Daniel Tetreault is a Massachusetts-based hairdresser, and in 2018 he was a nominee for a "best platinum" award. He didn't win, but he is very confident that he should have done. It certainly looks like he does a good job!

Can you see the difference?

In order to show the extent of the effect that lighting has on hair color, Daniel Tetreault posted this image. It is amazing to see how much more shimmery it looks when it is indoors, compared to its more matte look when it is outdoors. Which do you prefer? We're struggling to choose!

Do you feel like you've seen it somewhere before?

These hairdressers might think that Nordic White is a new trend, but we have certainly seen it a few times before... Infamously, Gandalf came back from his fight with the balrog with a new color-scheme on the go. Maybe he also felt like he needed to freshen up for spring!

There are many who might argue that it is not a new color at all.

Grandmothers everywhere have been sporting this 'Nordic White' look for centuries. It probably seems crazy to them that people are paying hundreds of dollars to dye their hair the same color as their grandparents! It shows how silly it is for anyone to feel like they need to cover up their true hair color as they get older. They should just call it 'Nordic White' and pretend they're trendy instead.

It seems obvious where the true inspiration has come from for this new hair colour, though.

It seems clear that the real reason why people are going for the Nordic White is to try to emulate the mother of dragons, Daenerys Targaryen. With two weeks to go until the new season starts, there will surely be more and more people trying to emulate this beautiful lady's locks. We're in!