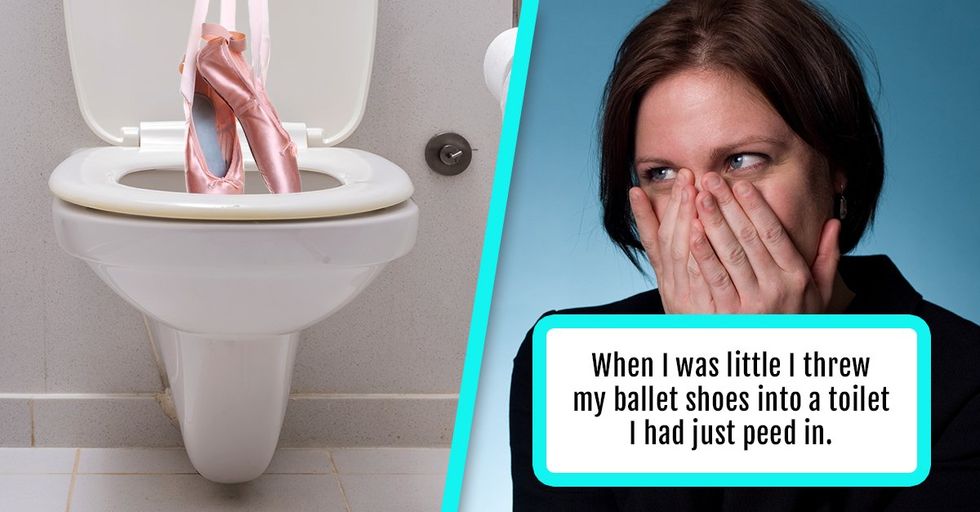 Kids say the darndest things... And do the dumbest things... And for absolutely no apparent reason. Looking back, we can all think of an instance or two in which we made an off-the-wall decision to engage in some random, unexplainable and even occasionally dangerous act completely void of all reasoning and rationale. And while it may not happen as often, adults still engage in their fair share of inexplicable behaviors.

Sometimes they hurt, taste bad, or get us in big trouble, and other times we manage to pull off our silly stunts and blunders without a single soul noticing. But not anymore.

Here are 20 utterly nonsensical things that people have done without knowing why.

This Co-pilot was on Auto-pilot.

Asbestos flavored cotton candy was this guys fave as a kid.

When I was about 8, I was walking out of school, I picked up some pink fairy floss (cotton candy) off the ground and put it in my mouth. It was insulation. -ben_schwimmer

"Pink fairy floss" (Here was our first clue pointing toward Ben's whimsical nature, which we now know includes a propensity for eating food off of the ground). Let's hope for Ben's sake, that his precious poofy fairy fluff was manufactured after 1989.

My dad was sleeping on the couch and I happened to be holding an avocado. Without giving it a second thought, I chucked the avocado at his head for no reason. It plonked right off his forehead, woke him up of course, and he was so furious he couldn’t look at me for the rest of the day.

I was like 11 years old, and my dad has a temper. The moment it left my hand I knew my life was ending so I just helplessly watched it sail into his sleeping face. --fakebirds-

This guy got in a HOLE lot of trouble.

Though, while impressed, fellow commenters still had questions...

This girl is on fire.

I tried to put out a candle by covering it with a Kleenex. -TheREALGillypies

I microwaved a single Cheeto. -Thatagui

This guy better watch himself.

Someone asked me what time it was and I lifted and rotated my wrist so I could look at my watch. I was holding an iced tea and just poured the whole thing into my lap.

I was really drunk once, lying in my bed, trying to eat a hot dog wiener. No bun. Just the wiener. Wasn’t even cooked. I was apparently far too drunk to handle eating it so I (for whatever reason) chucked it over my head, out of my top floor window and onto the lawn.

When it comes ice cream, this guy really blows.

Sometimes I blow on my ice cream before I take a bite. Have no idea why. -haccthaplanet

I was in my office with the door closed. Got up from my desk to walk out and knocked on the door before opening it and walking into the hallway. -winsomelosemore

I jumped up and (successfully) bit the string that is used to pull the attic door down. It had a metal bead on it... Immediately after I remember thinking “holy crap I actually got it in my mouth and broke the string". Then I realized the string was still there, but half my front tooth wasn’t.

A recent transgression leads to aggression.

Told my wife she has an anger issue. It just came out. Like, 10 minutes ago. We weren't even fighting. Guess what? She is fucking pissed right now. -EddiePsgetti

Went to a coffee shop and ordered a large cup of coffee. Barista hands it to me and I put it into my purse with no lid. -samanthalynn-s

Clearly, this lady had her morning routine in the bag.

Here's one way to blow your paycheck...

Microwaved a pen for two minutes in the workplace microwave. To this day I do not know why I did that.

Update: I'm still at the same job. The pen was a Frixion Pilot. When the ink smoke cleared and my senses came back to me, I quickly ran across the street to Lowe's and bought the same exact microwave to replace it with. I was never caught. -SLeNDeRMaN-23

Sounds like that pen turned out to be expensive.

Boiled a pot of pasta. Then poured the water and noodles down the drain. -justtosubscribe

We're assuming he cleaned up afterward and made sure to throw the pots and pans in the trash.

Anger gets you nowhere.

Angrily thwacked my laptop when the internet went out for the 10th time when I was trying to do my homework. Turns out I hit it where the hard drive was, and it never worked again.

Ever heard of voicemail?

One time I was eating a lemon poppyseed muffin. The phone rang, so I reacted by shoving the entire muffin my mouth and eating it as fast as I could, nearly choking to death, and I didn't even make it to the phone before it stopped ringing.

Here's an innovative way to participate more in class...

I had an intrusive thought that said I should scream in the middle of a mostly quiet class.

This guy also brought a new perspective to his class' discussion.

4th grade. The teacher asked a math question. I immediately raised my hand and shouted "poop". No idea why I did this but I was sent to detention for a week...