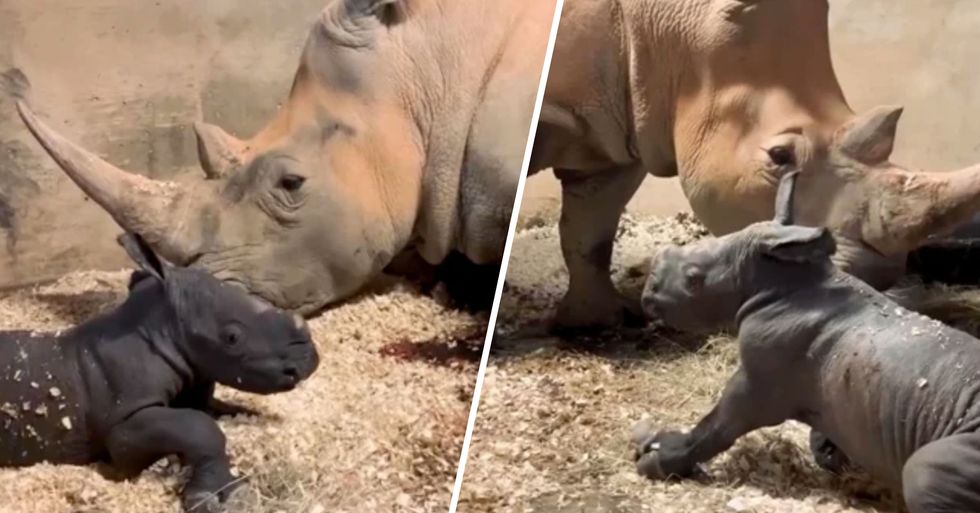 Who doesn't love the arrival of a baby animal?

Baby animals are not only the cutest things, but they are also a great sign of conservation.

North Carolina Zoo has recently welcomed a very special arrival, so make sure to keep scrolling to find out more...

The video at the end of her learning to stand will melt your heart.

Over the years, zoos haven't exactly held a great name for themselves.

Zoos are now generally frowned upon in the name of animal rights and conservation, but not all zoos are as bad as they seem.

The majority of zoos around the world work tirelessly in aid of animal rights...

And they are keen to educate visitors on the welfare of the animals they care for.

Captive breeding is also done to boost the population of certain species...

And a lot of animals kept in captivity are there purely because they couldn't survive outside in the wild.

One of which is the popular North Carolina Zoo.

The zoo is the world's largest natural habitat zoo.

Spread over five-hundred developed acres and 2,600 wooded acres - it's a pretty big deal, to say the least.

The zoo has been heavily involved with the conservation of animals for more than 2 decades.

And it's home to several endangered species.

Including the white rhino (otherwise known as the southern rhino).

Rhinos are the second-largest mammals on land - the largest being the elephant.

But these incredible animals face immense threats in the wild

Including poaching and habitat loss - causing their numbers to dwindle at a rapid rate.

That they were near extinction at the beginning of the 20th century due to being hunted for their horns.

In fact, at one point it was thought that had been completely wiped out.

But that wasn't the case and the species managed to cling on.

Sadly, however, there's has been a huge surge in rhino poaching since 2007.

Poaching is a huge business, with one rhino horn said to be worth around $257,872.

The rhino horn trade has been made illegal...

But that doesn't stop poachers, who continue to sell them on the black market.

Luckily, zoos like North Carolina are working hard to conserve the species.

And this week, there's been some amazing news...

On Monday, the zoo announced the birth of a southern white rhino.

She's the second baby rhino born in the park this year. Keep scrolling to check out the adorable photos.

Her birth marks the fourth calf to be born at the zoo in the past 2 years.

And she now joins a herd of 10 rhinos. According to People, the herd is rounded out by females Kit, Natalie, Abby, Olivia, and the new calf’s father, Stormy.

Zookeeper and International Rhino Keepers Association board member Jade Tuttle shared her thoughts on the birth:

“We’re excited that the two juvenile rhinos now have two younger siblings to interact within the herd."

The team says they are exicted to see how the young rhinos interact with each other.

"It’s going to be wonderful for our guests to watch both the very young rhinos and the older generation interact on the grasslands," explained North Carolina Zoo Director Pat Simmons. “These successful births are because of a lot of hard work and collaboration among our entire animal care staff."

The rare birth is said to be a "significant achievement" for the zoo.

And both calf and her mom, Linda, are said to be doing well.

Watch an adorable clip of the newborn as she learns how to stand below:

She's so sweet. We can't wait to find out what she's called! This isn't the only exciting arrival. Keep scrolling to check out some adorable meerkat pups and why their birth is history-making...