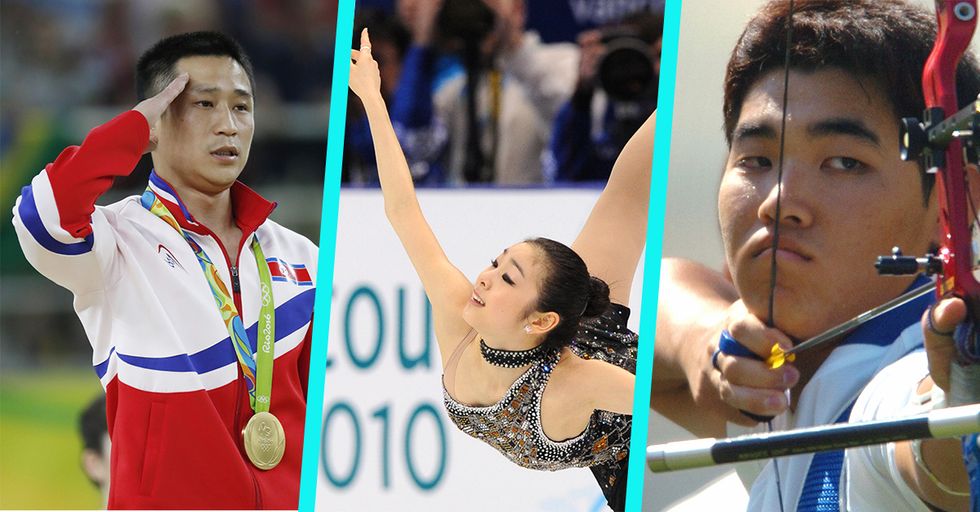 The winter Olympics are quickly approaching. The 2018 winter games will go from February 9th until February 25th, and take place in Pyeongchang, South Korea. Whether you're an avid Olympic games follower or not, you've most likely seen headlines buzzing with news about the games next month.

It was recently revealed that North Korea and South Korea will march under the same Olympic flag during the games. The news is a big deal, and has been met with a ton of mixed responses.

North Korea and South Korea will unify together for the winter Olympics, marching under a single flag.

Along with walking under the same flag, they have also agreed to create a joint women's ice hockey team. BBC News reports that both countries met in the village of Panmunjom, which is a truce area.

It's been quite a long time since the two Koreas have been in talks with one another.

It's been roughly two years since the countries have had this much communication or long talks regarding an issue. So what happens if the plans go through and move forward?

It means that hundreds of North Koreans will be let into South Korea for the games.

The parties include 140 orchestral musicians, 230 cheerleaders, and 30 taekwondo athletes. According to BBC News, they've also agreed to send a smaller number in March to the Paralympics.

Not everyone is looking at this joint venture as a good thing.

North and South Korean athletes will march under a “unified Korea” flag at the Olympics. It's the most dramatic ges… https://t.co/CG0c1OcPK5
— The New York Times (@The New York Times)1516208465.0

In fact, South Korea's hockey coach expressed concern regarding a joint hockey team. They claimed it could hurt South Korea's chances of doing well in the Olympic games.

The hockey coach is not alone.

North Korea and South Korea will march under a unified flag at the Winter Olympics. Jean Lee, who once negotiated… https://t.co/3aVR1RPkre
— Channel 4 News (@Channel 4 News)1516217413.0

Thousands and thousands of people have signed petitions to encourage President Moon Jae to veto the joint plan. So how can the plan actually go forward?

The plan will also have to be approved by International Olympic Committee (IOC).

"We see this as an opportunity for the regime to see the value of ending its international isolation by denucleariz… https://t.co/l8h6fCfAA4
— CBS News (@CBS News)1516215663.0

Since North Korea has missed deadlines, the committee will meet to decide. They will meet on Saturday in Switzerland for a final decision.

If the plan is approved, there are other hurdles to jump over.

Next month won't be the first time South and North Korea march as one in the Parade of Nations. #WinterOlympics https://t.co/GMjqmO76pJ
— #TokyoOlympics (@#TokyoOlympics)1516210230.0

For instance, South Korea will need to find a way to host North Korea. Sounds easy, but it's actually pretty complicated. The UN Security Council has sanctions making it illegal for cash to be transferred to Pyongyang.

Not everyone is against the joining of North and South Korea for the games.

South Korea's President Moon expressed that the joining could help improve the Koreas relations. As BBC News reports, that could "pave the way for the nuclear issue to be addressed and open the way to dialogue between the North and the US."

South Korea says it will march with North Korea under one flag at the Olympics opening ceremony… https://t.co/9myJEB3bd1
— Bloomberg (@Bloomberg)1516196380.0

According to The New York Times, South Korea hopes that the partnership could help ease the political tensions between the two. The negotiators of the games also agreed that both Koreas would root for athletes from both countries.

President Moon has been pushing for agreement between North and South Korea.

Sees North and South Korea trending. Finds out they're gonna walk out together in the Olympics https://t.co/QD0rsGhaPx
— John Lee (@John Lee)1516206727.0

Of course, not many expect that it will solve everything immediately. However, it's a respite for those in South Korea who remain alarmed at the prospect of war in the peninsula.