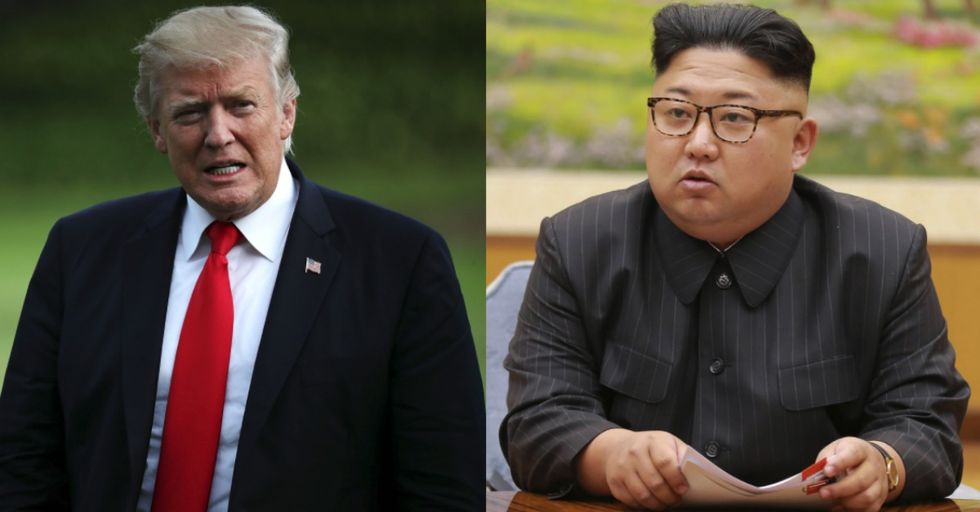 On Saturday, while Trump was in the middle of his Asia tour, he unleashed an extremely petty tweet directed at the leader of North Korea, Kim Jong-un. Even though Kim Jong-un doesn't have a real Twitter handle, he or someone in his line of command made a swift and severe response to Trump's child-like tweet.

Things are not looking bright for Donald Trump if North Korea ever finds a way to follow through on their threat.

On Saturday, President Trump gave a speech in South Korea where he warned North Korea that acquiring more weapons would not make them safer.

Trump said, "Do not underestimate us. And do not try us... The weapons you’re acquiring are not making you safer, they are putting your regime in grave danger. Every step you take down this dark path increases the peril you face."

The North Korean Foreign Ministry responded with sharp words of their own.

Reckless remarks by an old lunatic like Trump will never scare us or stop our advance. On the contrary, all this makes us more sure that our choice to promote economic construction at the same time as building up our nuclear force is all the more righteous, and it pushes us to speed up the effort to complete our nuclear force.

Apparently, Trump thought that the most important part of their statement was that North Korea called him old and not that fact that global security is at stake when speaking about nuclear weapons.

He tweeted, "Why would Kim Jong-un insult me by calling me "old," when I would NEVER call him "short and fat?" Oh well, I try so hard to be his friend - and maybe someday that will happen!" Trump wrote. This exchange is starting to look more like a cat fight than discourse between two foreign leaders.

Also, when exactly did Trump try to be friends with the North Korean dictator?

He's sent a barrage of fighting words towards North Korea, both in tweets and in speeches. In September, he gave a speech where he said, "Rocket man is on a suicide mission for himself and his regime." Then he said, if “[the U.S.] is forced to defend itself or its allies, we will have no choice but to totally destroy North Korea." Trump isn't racking up any friendship points by calling Kim Jong-un that rocket man nickname.

But nope, that actually the real President of the United States calling another foreign leader names. We really shouldn't be shocked anymore when Trump tweets things this petty... But that wasn't all...

A Lizzie McGuire fan account likened the insult to something that would have happened between Lizzie and her rival on the early 2000's Disney TV series. They wrote, "If you replace Kim Jong-un with Kate Sanders, this could easily be a line from Lizzie McGuire." The main difference is that Lizzie would have apologized after for implying that Kate Sanders was old and fat (after a long talk with Miranda and Gordo, of course).

Trump shied away from a visit to the border between North and South Korea and called them a "cruel dictatorship" in a speech last week.

After all this, along with Trump's response to Kim Jong-un's tweet that called him old, a newspaper owned by the North Korean state said that Trump deserved the death penalty.

The North Korean newspaper responded to Trump's tweet with a sinister threat.

They wrote, "The worst crime for which he can never be pardoned is that he dared [to] malignantly hurt the dignity of the supreme leadership... He should know that he is just a hideous criminal sentenced to death by the Korean people."

The newspaper also mocked Trump for not visiting the border between North and South Korea during the tour.

It's a stop that most U.S. officials who visit South Korea make before returning home. Trump complained of weather interfering with the helicopter trip, but the North Korean paper called it something else. "It wasn’t the weather," they said, “He was just too scared to face the glaring eyes of our troops."
20%