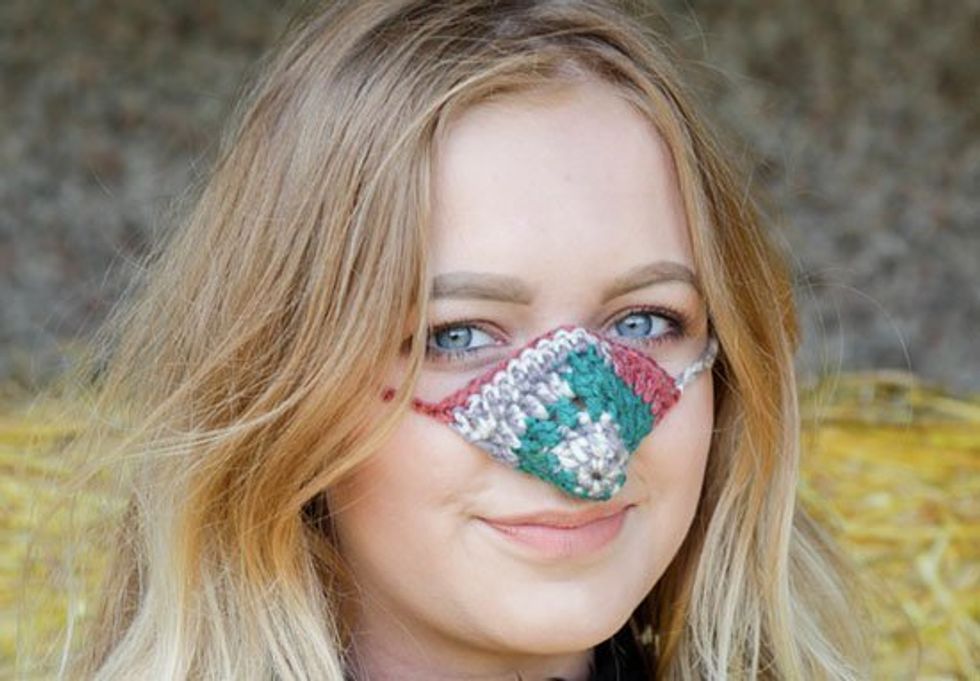 Nose Warmers On Sale For People Who Are Always Cold

Summer is officially over now and it's getting to the point where you should be thinking about wrapping up warm when you leave the house. Stepping out into the crisp cold air might be a welcome change from the sweltering heat of summer, but your nose won't thank you. That's why some genius has decided to create the nose warmer, for you poor folks who always have a nippy schnozz.

Just look how cosy these two look in their nose warmers, they've got the right idea. Ain't nobody worried about the cold in this pic.

Seriously, look how fashionable this thing is. Why wouldn't you want to own a nose warmer? You'd be absolutely certifiable if you didn't want to leave the house in one of these tings.

Look at the options!

If you thought nose warmers just came in boring beige colours, then think again friend. You can accessorise your nose in bright pink or purple to draw even more attention to this wonderful fashion statement.

And not all nose warmers were created equal, oh no. This one's made of wool, so you know you're nose is going to be warm af.

Why is this one so big?

Not entirely sure what's going on here, so we might as well just move past it and pretend this one never happened.

Faux fur for your freezing fashonistas

See, this one is made of faux fur, so you know it's going to keep you warm. You know who stay warm in winter? Animals. Interestingly though I don't think I've ever seen an animal with a furry nose.

You can even go full animal print!

Woah, this one even has animal print on it. So if you're on a Safari and it's pretty damn cold, this one could act as a thermal insulator and some camouflage. Now that's value for money if you ask me.

Lorraine must have a cold nose.

The nose warmer trend has taken over so completely that even UK daytime TV personality Lorraine has decided to wear one. If that's not a reason to get one I don't know what is.

The internet isn't happy, though.

Sadly, as is the case with all nice things, the internet has decided to ruin the nose warmer for us all. This kind soul has handily pointed out we all already own nose warmers - scarfs. Bit reductionist if you ask me.

Is it really so unbelievable?

This Twitter user is so shocked at the concept of a warm nose they can't even understand how a trend like this could happen. But let's be honest, weirder things have happened in 2018.

Speaking of 2018, it's been a bit rubbish hasn't it? You know what cheers everyone up? Clowns. Yep. Everyone loves clowns. We need more clowns on the streets to cheer people up. This is a good thing.

See this lady has the right idea. She's taking the nose warmer concept and crocheting up a storm. Look how happy she is. Be more like her and get in the festive spirit.

What is going on here?

Speaking of the festive spirit - beard baubles. Another completely useful and necessary invention to help us through our days.

This guy looks so festive!

Now all jokes aside, this guy is absolutely rocking his beard baubles. I feel like it's all in the size of the beard though. If you're wondering whether your beard is too short for beard baubles, it probably is.

Look at all the colours!

These bad boys come in all different colours so you can decorate yourself like the tree you really are. What's more Christmassy than that?

I mean look how good they look!

All you've got to do is hook these little gems onto your beard, and you'll instantly become the talk of the office Christmas party. Yes, in a good way. Trust me.

We have a bauble Scrooge over here.

I can think of plenty of positive four letter words: See, plenty.

This guy gets it.

Finally, someone's talking some sense around here. Think about how festive these bad boys would make you feel. Probably not a very good idea to try eating with them in though, they'll just drop in your soup.

A jumper and a blanket?!

Going back to how cold we all are now it's nearing November (except Australia you weirdos), let's take a look at some other stuff to keep the shivers at bay.

Have you ever seen anything more cosy?

Like these absolutely ridiculous-looking blanket jumpers. While they might look ridiculous, when you stop to think for even one second about how amazing these things would be, you'll want one anyway.

If it's so cold you need a jumper blanket, better get those legs wrapped up.

No amount of jumper blanket is going to help you if you've got bare legs out though, that's just basic science. You've got to be strategic about these things if we want to beat the cold.

Finally, something for us freezing writers.

If you get freezing fingers when you're typing up that essay which is due tomorrow in the dead of night, then this invention is for you. You'd be able to type at least 3x as fast. That's a fact.

Look at those things. You'll be the talk of the town when you whip them out for some writing at your local coffee shop. Come to think of it, if your coffee shop is that cold, you probably should find another coffee shop.

Now this is the big one. The magnum opus of cosy creations. The Slanket. I'll just give you a moment to bask in its glory.

And this one is perfect for this time of year! Really spook your friends with this skull and crossbones Slanket, they'll be terrified! Unless they're a pirate, in which case they'll probably love it.

Why does this one look warmer than the others? It's made out of the same material. It's ostensibly the same as the other two you've just seen, but for some reason it looks ludicrously cosy. Too cosy, really.

This one is perfect for all you guys with poor circulation. You can be as happy as a clam in your Slanket and nose warmer and hand warmers, watching Christmas films with your beard baubles on, but you could still have cold feet. What then?

That is when the foot warmer comes in handy, just to tick those little toes off the list. Once the toes are ticked off, you're basically good to go.

I wish I was as cosy as this guy right now.

This guy doesn't even have all the other awesome stuff to keep him warm, but look how cosy he looks. This is the power of a foot warmer, folks.

Where it all began.

But ultimately, when all is said and done. Being honest, and of course not meaning to offend anyone. All of these inventions pale in comparison to the absolute genius that is the nose warmer. The pinnacle of all human creation. Buy one now and thank me later.