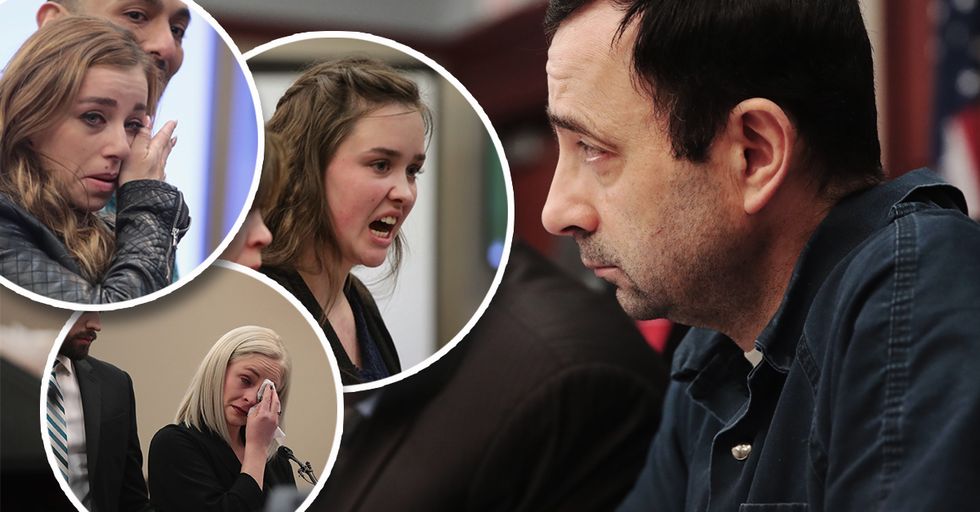 Sexual harassment and assault have been in the media lately. And by lately, we mean constantly. Not a week goes by without another prominent man being accused of coercion, assault, or outright rape. It's gotten to the point that many people are feeling fatigued, and rightly so. Just how many of our heroes can fall in so short a time?

In fact, it's getting to the point where people are saying the #MeToo movement has jumped the shark.

Take the Aziz Ansari allegations, for instance. Over the weekend, an anonymous woman named Grace told Babe magazine that she had gone on a horrific date with Ansari which ended in him repeatedly trying to sleep with her and then coercing her to perform oral sex on him.

What was the problem, people wondered. It was just a bad date, and Ansari could not have been expected to read Grace's mind. If she did not say no loudly and numerous times, it's her fault she did not enjoy what happened next.

Another case that has caught the general attention of the public lately is that of Dr. Larry Nassar, the once esteemed USA Gymnastics and Michigan team doctor who is on trial for sexually abusing 98 girls and women (140 women have accused him in total), many of them elite athletes.
The list of Nassar's victims is stunning in its breadth and selection.  Simone Biles, Aly Raisman, Gabby Douglas, McKayla Maroney – all Team USA athletes, all Olympic medalists.
They were and are the pride of America. And yet they weren't safe. Even worse, people seem to be turning a blind eye. They seem inured to the pain that these girls went through.

This week, Nasser's accusers finally got their day in court, and while their testimonies were, to the very last woman, heart-rending, a few things caught my eye.

The only known victim of Larry Nasser who wasn't an athlete was Kyle Stephens, a family friend of Nasser's who says the abuse started when she was 6. "You used my body for six years for your own sexual gratification. That is unforgivable," she said to him from the stands.

But even worse than the abuse was what happened next. Stephens' parents didn't believe her for years, and her father took his life when he discovered she had indeed been telling the truth. "Had he not had to bear the shame and self-loathing that stemmed from his defense of Larry Nassar, he would have had a fighting chance," Stephens said.

This is mandatory watching and you really should watch Kyle Stephens’ full testimony. I am in awe of all these 98+… https://t.co/9tWB04xs6S
— Katherine Carroll (@Katherine Carroll)1516164862.0

Another woman who spoke was Donna Markham, mother of Chelsea, one of Nasser's victims. Markham spoke on Chelsea's behalf because she wasn't there. She'd committed suicide at 23. "Every day I miss her," Markham said. "Every day. And it all started with him."

And this is what we talk about when we say the true cost of sexual assault and coercion. For many, they are tiny little deaths. For others, they are big, final ones. Sexual harassment, coercion, abuse and assault all have indelible but invisible impacts on the survivors.

People who have been abused, particularly those who were abused as children have to deal with depression, flashbacks, PTSD, self-harm, eating disorders, substance abuse, and, of course, suicidal ideation and suicide. Many wait years to come forward out of fear they won't be believed, fear of their abuser, or even fear of how people will react to them when they do. Many feel ashamed – that the abuse is somehow their fault – which is why they are hesitant to speak up. And this silence festers.

I've heard it even from women talking about " oh why now " about victims of sexual abuse, ma'am please take a seat because you fail to recognize the effects & trauma of someone abusing and dehumanizing you. Speaking up is courage no matter the time.

Also, do the research. False rape accusations are extremely low. Somewhere between 2% & 10%.

When a survivor is abused, it might seem like a momentary thing – a once in lifetime blip that just happens – but for that person, scars can form which affect them for a lifetime. And these scars don't only hurt them, they hurt other people around them, their family and friends.
Abuse and assault are not just wounds of the body, they are wounds of the spirit and soul. If anyone doubts this, look at the Nasser case. Larry is a monster who single-handedly destroyed the lives of countless people, not just his immediate victims. Had he never abused Kyle Stephens or Chelsea Markham, who knows what their lives – and their family's lives would have been like. Of course, we can never ponder this with Chelsea because she's no longer here, and neither is Kyle Stephens' father.

So when we think about #MeToo and all the sexual assault cases in the media, instead of leaning into our collective fatigue, perhaps we should lean more towards empathy and understanding. Forty years ago, marital rape wasn't a crime in most states. People didn't even think about it. Now it is.

The things we were once okay with, we're no longer going to tolerate. Coercing someone for oral sex, or any kind of sex, or even physical contact in general, is not okay and it's time we acknowledged this as a society. Next time you hear people blaming women for a "bad date" or see them rolling their eyes at the revelation of yet another prominent man's predatory behavior, just take a moment to remember that all these things have consequences both emotional and physical. And we're no longer going to stand for them as a society.