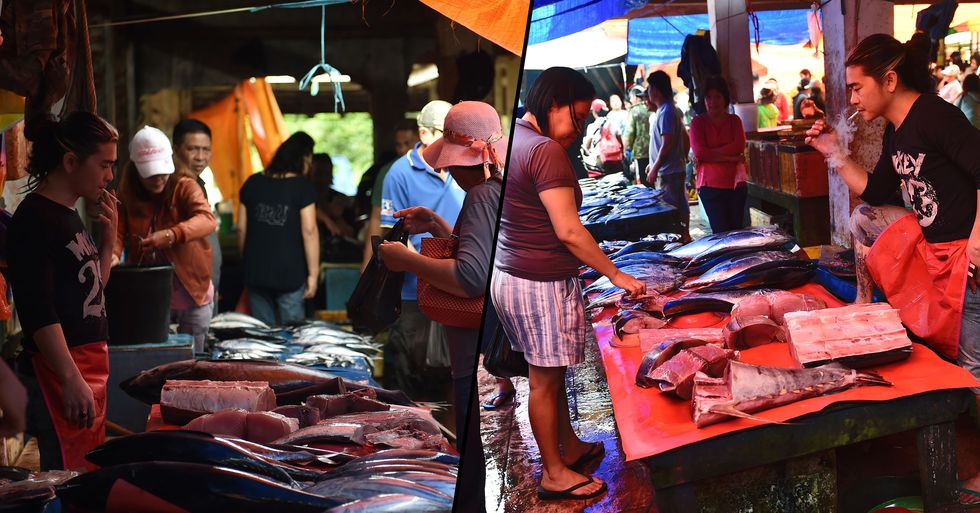 People are outraged to hear that, despite ongoing health fears, a wet market in Indonesia has remained well and truly open.

And now, PETA have come forward with damning footage from the market, which has continued to sell dogs, cats, and bats throughout the pandemic...

Across China and Asia, there are the notorious livestock wet markets.

And, this week, people have been completely outraged to find out that Indonesia has kept one of their biggest wet markets open throughout this entire pandemic.

But first, let's rewind a couple of decades...

Chinese and Asian wet markets have been an essential part of their economy for years and they are now a huge part of their cultures.

But what exactly is a wet market?

A wet market is a marketplace found across China and South East Asia that sells fresh meat, fish, produce, other perishable goods, and more than often, live animals that are slaughtered upon customer request.

But because of the ones that do, they have now earned themselves a notorious reputation for their inhumane and cruel acts upon livestock.

It is completely archaic that this cruelty has been allowed to happen for so long. Things need to change.

Well, change may just be around the corner.

In the last few months, many professionals have been pointing their fingers directly at these wet markets as the direct cause of the outbreak of the deadly virus.

The virus, which has now infected more than 2 million people globally, is strongly believed to have originated from one of these wet markets in Wuhan, China.

Evidence suggests that the sale of contaminated meat from Huanan, one of Wuhan's biggest wet markets, could have been the sole cause of the virus.

The contaminated meat of fruit bats, to be precise.

And, ever since this outbreak, people have been fighting more than ever before to get these markets shut down.

Speaking recently to host Howard Stern on his Sirius XM radio show about the ongoing medical pandemic, the music icon said: "I really hope that this will mean that the Chinese government will say, 'OK, guys, we have really got to get super hygienic around here'. Let's face it, it is a little bit medieval eating bats."

You can understand people's outrage and frustration upon hearing that Indonesia has kept open one of their biggest wet markets throughout this entire pandemic.

It is completely shocking.

The Tomohon Market in Sulawesi, Indonesia, is famous around the world for vendors who sell animals such as dogs, cats, and bats... And it hasn't once closed its doors throughout this pandemic.

Business has been ticking along as usual...

Well, according to PETA, it has been.

The animal rights organization has claimed to have visited the market this month...

And have reported that "the flesh of wild boars, snakes, dogs, and rats... were openly sold at the market."

They also reported that hygiene and sanitation across the full market was low...

Despite the ongoing risk of the virus.

"Gloveless workers and customers were seen handling the body parts of animals who had been killed on site."

PETA claims to have written to health officials in Indonesia and other parts of Asia regarding this issue...

And have called for an end to these cruel, and unsanitary live-animal markets. But, of course, they are yet to receive a reply.

You can watch the video from their visit here:

Though be warned, it contains some incredibly graphic footage. For more on these barbaric markets, keep scrolling to see photos from inside the Wuhan market where the virus was believed to have originated...