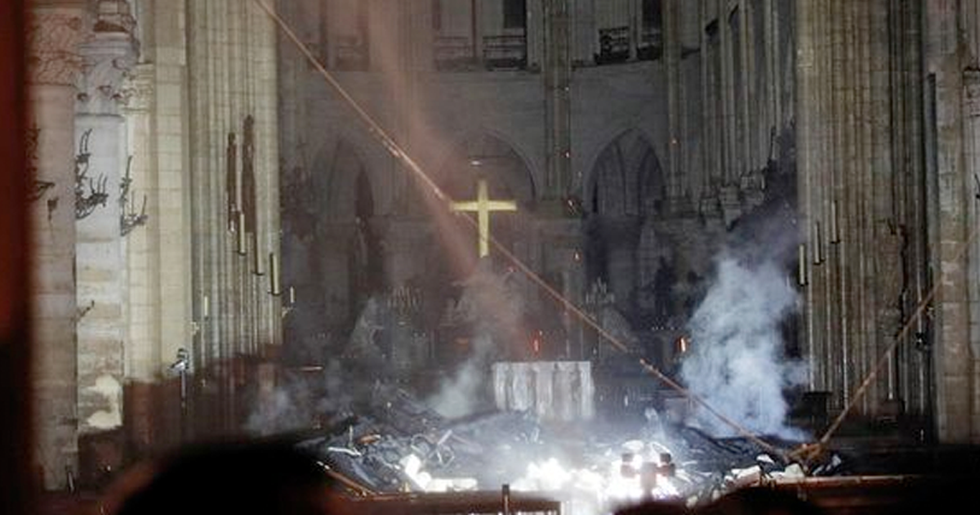 In case you missed the news, the famous Notre Dame Cathedral based in Paris caught fire yesterday.

As a result of the blaze which lasted several hours, the French landmark has been left in a devastating state.

Images shared online of the beautiful building horrifically ablaze, have stunned the world.

The fire was eventually suppressed by a dedicated team of fighters - and although the cathedral still stands, the damage is indisputable.

And, the cause of the fire is still not known.

But there is one mystery surrounding the incident.

While much of the interior of the cathedral seems to be damaged beyond repair, one area appears to be largely unaffected.

The crucifix at the altar looks basically untouched and some people are viewing it as divine intervention.

We've even got the picture, plus the newest shots of the aftermath right here.

Keep on reading to see them all.

Notre Dame is a medieval Catholic cathedral in Paris.

It's truly a wonder of architecture. The project of building the cathedral first began in 1163 and wasn't completed until 1345.

It's one of the most famous structures in Paris, and the world.

It's the most visited tourist spot in the city, with over twelve million visitors per year.

It's also incredibly unusual and beautiful.

Many cite Notre Dame as the first example of Gothic architecture with innovative inclusion of flying buttresses, rib vault and the iconic gargoyles.

For many, it's one of Paris's greatest attractions.

It overlooks the River Seine. Notre Dame has always been an iconic part of the Parisian cityscape.

Some credit its fame with its links to popular culture.

In 1831, Victor Hugo wrote The Hunchback of Notre Dame, a fictional account of a deformed man who lived in the cathedral. The novel has been adapted many times.

Including a critically acclaimed remake by Walt Disney.

Hugo's story really captured the attention of the public, and after his novel's publication interest in Notre Dame increased significantly.

The cathedral was undergoing restoration when a blaze started - at this moment in time, we still don't know what caused it.

The fire lasted over twelve hours.

It continued overnight and caused significant damage to the building - especially the beautiful exterior.

The sight of the cathedral burning is truly shocking.

The worst of the damage was contained to the upper walls and windows of the church - but the size and longevity of the fire were truly frightening.

There's something almost apocalyptic about the view.

The sight of a religious monument engulfed by flames can strike fear into the hearts of even the most skeptical among us.

It's clear how much of a tragedy this is.

As the spire and roof of the stunning monument fell in, the world watched in abject horror.

The public were in shock.

Many took to the banks of the Seine to watch the building burn, with many offering prayers and hymns.

By morning, the blaze was under control.

But firefighters remain surrounding the premises in case of any residual after-effects following the immense fire.

It's clear the world is shaken up.

The fact that they cathedral holds so much history - and so much of Paris's identity - makes this a huge loss.

It's clear that things are pretty bad - some reports indicate things may not be as terrible as we fear.

Much of what is lost can be restored.

The stone ceiling vault underneath the cathedral's roof prevented a huge collapse which would have surely ruined far more of the interior.

This morning, images of the interior emerged.

Based on the destruction inflicted on the cathedral's outside, people weren't holding out much hope that anything would be safe.

People waited with bated breath for news on the interior.

And based on initial reports, things may actually be better than people had feared, with much of the inside seemingly preserved.

There was one thing that really surprised people.

Notre Dame has a famous crucifix up at it's front, right in the center of the altar - pictured here in 2017.

And people noticed something strange.

As first footage of the cathedral's interior was released to the public, it seemed that one area of the inside was particularly unscathed.

This image is particularly striking.

The way the light hits to cross, which is standing high amid piles of rubble and destruction, is a little bit spooky.

As soon as the image came out, many took to Twitter to comment on how strange it seemed.

Some saw it as symbolic.

This picture of the cross still standing amid the ruins of Notre Dame is quite the picture of hope. https://t.co/lON2eyDPda
— kyle beshears (@kyle beshears)1555370044.0

The idea that something seemingly small and vulnerable can survive such a massive disaster could seem like an emblem of hope for the cathedral.

In times of disaster, it's nice to have an image like this as a reminder of good.

For many, it's been the hope they need for the future of the Cathedral, which many were worried was lost forever.

Some have even seen it as a religious emblem.

It does align uncannily well with a famous quote by one of Franc'es best known Christian martyrs, Joan of Arc.

Some see the image as a religious proof.

The fact that the cross remained unscathed amid massive fires is quite remarkable - though we aren't sure we'd attribute it to a higher power.

But for some, it's absolutely convincing.

What do you think? Proof of God's existence? Or an unusual coincidence?

Either way, there's no denying the image is pretty stunning.

We're hoping it serves as an image of hope, whether you're a religious or not.

But other images offer similar feelings.

Whether you're a believer or not, there are certain images of hope that can be taken from this disaster.

Even if they're not necessarily associated with God.

People have come together during this tragic time, and that's positive we can all take away.