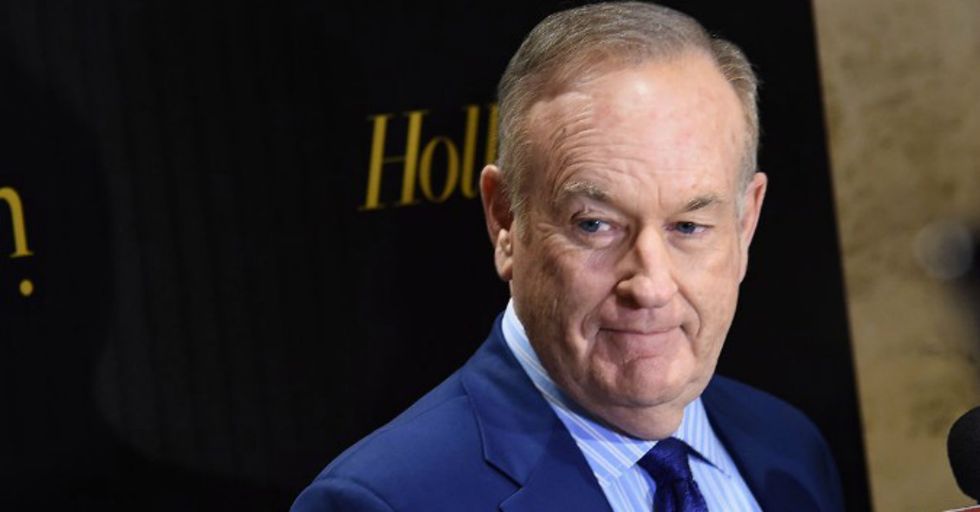 With all of the depressing news going around these days, it can sometimes be fun to play a game we like to call, "Who Are the Bad Guys Gonna Blame This Time?"

The rules are simple. Find a bad guy (or gal). Then, guess who that person is going to blame for their own actions. If you guess that they step up and take responsibility for their actions rather than blaming someone (or something) else, you automatically lose.

Earlier this week, former Fox news anchor Bill O'Reilly blamed God for the sexual misconduct allegations he was facing. Now, he appears to be dealing with the fallout.

We're all familiar with angry Bill O'Reilly. He looks something like this:

Yikes. Pretty intense. You probably wouldn't want that anger directed at you. Not even if you were omnipotent.

Earlier this week, O'Reilly revealed he's mad again. This time, though, that anger is directed at God. Yes, really.

Over the weekend, The New York Times published an exposé revealing a $32 million settlement that O'Reilly paid out earlier this year. That's in addition to the five settlements we've known about since April of this year. On the latest episode of his web series "No Spin News," O'Reilly said, "Am I mad at God? Yeah, I'm mad at him [...] I wish I had more protection. I wish this stuff didn’t happen. I can’t explain it to you. Yeah, I’m mad at him." He went on to say, "If I die tomorrow and I get an opportunity, I’ll say, ‘Why’d you guys work me over like that?'"

Yep, you read that right. O'Reilly is mad at God for the sexual harassment allegations he's facing (because he sexually harassed women).

And really, it's not too difficult to see his logic. After all, he's a rich, white man. Traditionally, they haven't had to worry about much in the way of repercussions for their deplorable actions.

Now, O'Reilly is seeing the fallout of 1. Sexually harassing women, and 2. Blaming his behaviors on the Lord above.

Yesterday, O'Reilly's longtime talent agency, UTA, announced that it would not be renewing his contract when it's up at the end of the year. It's not clear at this time whether this decision was made in light of the new settlement news...or if it was maybe more a divine intervention sort of thing. Let that be a lesson to you: Maybe don't blame the big man upstairs for your own heinous actions? Also, don't do heinous things.
20%