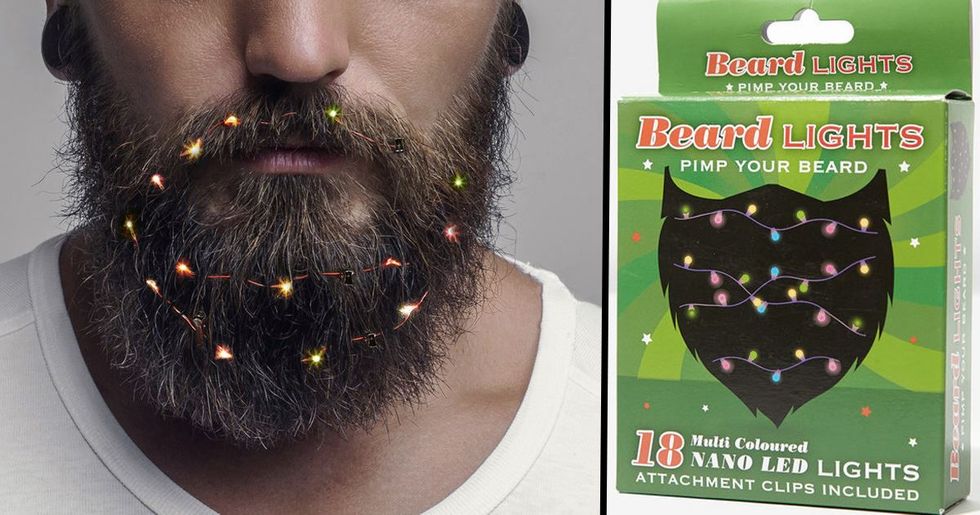 Fairy lights are everywhere these days. You can put them in your plants, on your pets and on your fridge. Now, you can put them in your beard. Oboviously, if you buy a set and don't have a beard then you'll have to either grow one yourself, or put them into the beard of someone else..but still, the idea remains the same...and it's an absolute joy to behold!

And to think we've all been walking around thinking beards were cool enough as they are...of course they aren't! This invention has been staring us in the face for years (and hopefully will literally be staring us in the face for Christmas's to come). It's been right under our nose all along! Of course! Fairy lights for the beard, why didn't we think of that! It must have been a real light bulb moment!

Beards won't be the same without them

You'll never look at a normal, fairy-lightless beard in the same way again. you'll look at it with disdain for how boring it is. Take a look at it here

They're really growing on me

The more I think about the idea, the more it's growing on me...and that reminds me of another positive of having fairy lights in your beard, people won't notice your terrible puns quite as much, they'll be so distracted by your festive facial hair.

Sure they sell it as beard lights, but I'm sure you can use them in your head of hair too. Be inventive....

The only problem I can think of is the inevitable beer and egg nog being soaked up by the beard too....liquid and electricty do not mix and it's within the beard (and during this season) that they're bound to.

Magical. Like something out of Harry Potter, but actually magical, not that phony made up rubbish.

If they're SOLD OUT?

There are other alternatives if you're feeling left out. Like simply getting normal fairy lights and wrapping your whole head up in them. Why not? It's Christmas!

Well, again, be creative. If you don't have a beard, that's fine! You have a head don't you! To A) Think of a solution and b) Use as a solution

Another alternative that you'll be chomping at the bit to do after I've mentioned it is to grow a beard! Then tangle those fairy lights up in it.

Some people hang chocolates from the Christmas Tree but how about Gin filled baubles? A bit of a fire hazard, but if it goes to plan they won't be up there for long.

Or, even better than the fairy lights maybe? Beard baubles, genius! Check them out here

Feeling a bit left out now, aren't you?

If you've got a beard, don't just shave it off because "ugh it's disgusting and there's food stuck in it" and everyone's told you to! Stick to your guns, it looks great. They'll be sorry.

Or you can get someone to slap one onto you...I don't know how well this method works, but what's the worst that can happen? ok, don't answer that.

This looks like a cartoon, or like it's been photoshopped out of the video game, but it isn't. It's for real! here

With the beard lights, I wouldn't go here...

It'll seem like a bit of an anti-climax those small glow-worm type things in your beard if you're stood next to this.

Perhaps best to cut your losses and leave the glowing beard braides at home if you're going to be walking through here.

Can you imagine having Christmas somewhere like here? It looks so idealistic, almost like you'll never have a full on festive family argument ever again.

Decorating your beard might not be enough to totally get away with not decorating anything else, but if you're smart, you can decorate in a very time efficient manner.

Just don't trust your animals to be helpful...cats are alive to destroy humans and will do so at any costs.

God, what a nightmare

Untangling these little things are a total nightmare, if Sabrina (who is a teenaged magical witch) is having trouble, then what are we mortals meant to do?!

A much more modern take on the star at the top of the tree, what a cool idea that is. Find it here

Somebodies Christmas can be made by the simplest of presents, like a pizza...I'd be happy with that!

It's easy to get carried away and lose yourself in that inner child...but that's what this time of the year is all about!

Been a good girl this year?

Hopefully, otherwise it's another lump of coal for you. I mean, there's worse things than coal in the stocking...like a 3 pronged socket plug in yor sock.

Remember, they are for life, not just for Christmas! And don't wrap them in a box thinking that's cute either, poor little things.

Competing with your neighbors for best decorated house? Well the beard fairy lights will certainly give you a head start.

Sit back and relax